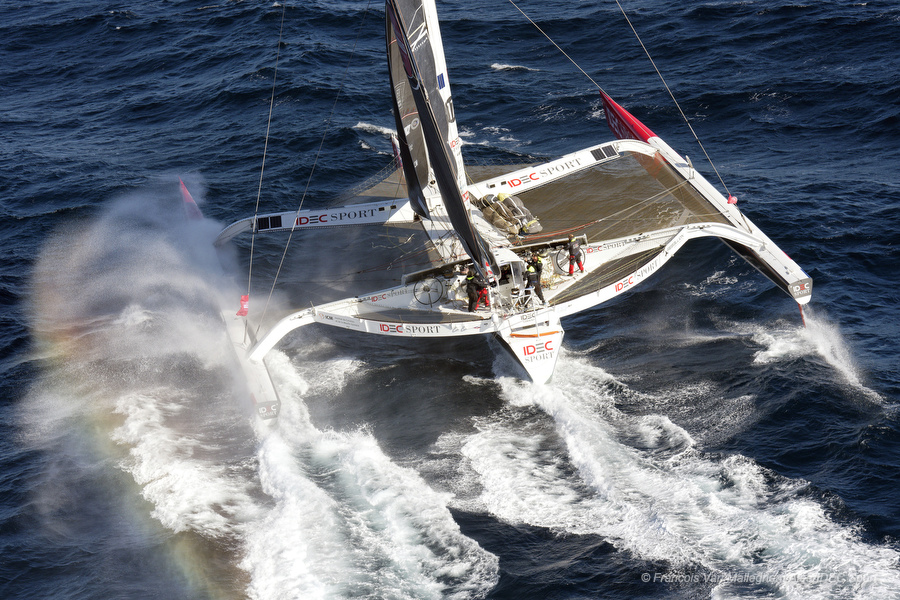 Powering towards the finish and a possible Tea Route record.
pic by Bertrand Deslesne / IDEC SPORT

Less than 900 miles from the finish of the Tea Route record in London, the IDEC SPORT maxi trimaran continues to extend her lead over the record holder, Giovanni Soldini’s trimaran, Maserati, sailed by an Italian crew. Francis Joyon, Christophe Houdet, Bertrand Delesne, Antoine Blouet and Corentin Joyon have been managing to keep up high speeds since sailing to the south of the Azores, achieving an average of 27 knots on the direct route towards the Channel Approaches.

The lead over the record has been growing steadily over the hours and now exceeds 700 miles. These figures do not reveal just how tough the conditions currently are. According to Francis Joyon, they are in “survival mode,” in violent squalls with waves in excess of 6 metres due to the series of storms that recently swept across Northern Europe.

There will be a final gybe to carry out in the Celtic Sea, before the big, red and white trimaran tackles the final stretch of her long journey, which started more than thirty days ago in Hong Kong. The sail up the English Channel will be very tense because of the incredible amount of shipping. There will be no time for the crew to ease off before they pass under the QE II Bridge, which officially marks the end of this historic route, after sailing halfway around the world. IDEC SPORT is getting ready to complete this voyage in record time.

More Or Less in Survival Mode
“We have to remain vigilant and focussed right up to the end.” Far from crying victory, Francis Joyon has asked his crew of four to be particularly cautious and concentrate on the task in hand. The strong NW’ly winds are far from being steady in strength and direction, and the periods spent at the helm are close to that of a high-wire act. “The squalls are very violent and come without warning,” he said. “The wind suddenly strengthens so quickly that sometimes we find ourselves with a bit too much sail up. You then really have to hold on tight to the helm and wait for the squall to pass over while getting soaked in the heavy rain. In these conditions, and because of the sea state, we are between 20 and 30 percent below the full potential of the boat.” As they reach the Rochebonne Shelf with the sudden falls in depth, the sea conditions are not going to improve and this 31st day of racing looks like one of the most difficult for the crew. “The only way to move around the deck is by crawling,” added Francis. “We really need to be careful to avoid injuring ourselves when moving around. It’s a bit like being in survival mode at times.”

A Possible Finish Early on Wednesday
In spite of the tense atmosphere, Francis and his men are in a hurry to finish. “These skies remind us of Brittany,” said Francis. “Behind the line of squalls, the skies clear with some brilliant light and sharp contrasts. That reminds us that our job is almost over. We will be keeping offshore to find a waypoint in the Celtic Sea, where we will carry out one final gybe before entering the English Channel. The wind will then be more or less due west and we will have to weave our way up the Channel between the coasts of Britain and France to aim for the Straits of Dover. We hope to finish early on Wednesday morning after just over 31 days of sailing. That time pleases us given the incredible number of weather systems we have had to deal with. The Tea Route is really amazing because of all the contrasting weather conditions.”