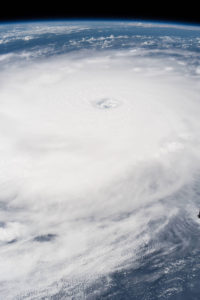 The eye of Hurricane Irma is clearly visible from the International Space Station as it orbited over the Category 5 storm on Sept. 5, 2017.
pic by NASA

The devastation, chaos and wanton destruction caused by hurricanes is simply astounding.

World news reports, social media and every single method of communication available is following and commenting on Hurricane Irma which is reported to be one of the most powerful hurricanes ever, and which may be followed by Hurricane Jose.

It has clubbed Saint Martin and has devastated Paraquita Bay which is known as Tortola’s hurricane hole, and where row upon row of boats have been uprooted from what was a safe anchorage. And there is more, much, much more…..!

Out there too are many South Africans who are following their sailing dreams, and who may be effected. Some are in danger, others may still be waiting in fear as the path of Hurricane Irma has them in its sights.

To every one of them, those we know, and those whom we don’t, here’s to your strength, fortitude and ability to survive. Your sailing mates have you in their thoughts and prayers, and are with you all the way until this monster blows itself out.

I am purposely not publishing pics of the devastation caused so far, and rather suggest that readers have a look at the NASA site about Hurricane Irma which has interesting info, pics and more.