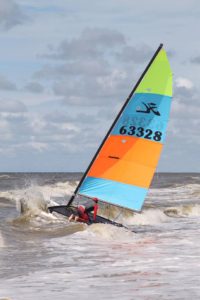 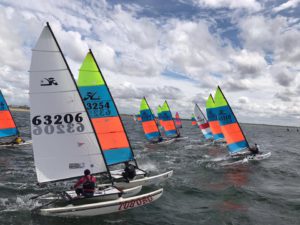 Blaine Dodds is a seasoned campaigner who needs no introduction to the cut and thrust of top level international competition as he has been in the thick of it for many years.

However he did leave his charge for a place on the Hobie 14 podium rather late!

He started the event in a very uncharacteristic way with a few double digit finishes. It was only in the 6th race that his true grit, determination and skill showed as he finished the final 6 races with three 1st; two 2nds and a 9th – to pull himself onto the podium a full 10 points ahead of his nearest rival.

The RSA contingent had Garth Louden in 7th and Peter Hall in 9th – to make it 3 in the top 10.

The Hobie 14s were dominated by the husband and wife duo of Fletcher and Georgia Warren-Myers. It was Georgia who led overall for the first half of the regatta, prompting Fletcher to pay tribute to his wife who won more races than he did.

The final day of this event was sailed in exciting and turbulent conditions. The day started with moderate winds from the West / South West and a fair share of sunshine. During the course of the day, the wind picked up to fresh and even strong breezes, causing a massive windswell at sea and a challenging shore-break with the upcoming tide. For the safety of the sailors racing was abandoned due to a threatening thunderstorm.

The Hobie 14 and Hobie 16 classes eventually went back to sea to complete their final races. Many sailors chose to stay ashore, due to the strong winds and challenging surf. The sailors who went to sea treated the crowds on the beach to spectacular views while challenging the shore break and strong side-onshore winds.