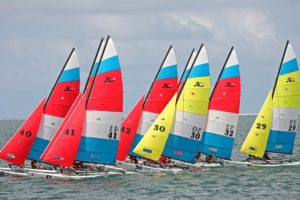 Yesterday (Monday) the wind and surf had calmed down. Light air, again from Westerly directions. A rainbow formed over the Holland Hobie House, a beautiful welcome to the early bird sailors arriving at the beach. At the scheduled starting time for the first race the wind shifted to onshore and picked up nicely to around 8 – 10 knots, making sailing possible. The dark thunder clouds blew past and did not come back.

The fleet was spit in two and raced and scored separately.

In the yellow fleet former Hobie 14 World Champion Thorin, Zeilmaker had an impressive day with three first places and a fourth. When asked about the fourth Thorin replied, ‘I had the lead but thought it was only 2 laps. So I started t head for the finish line when I say the fleet heading back upwind. So I stopped and headed back upwind but I had already lost eight places’.

Today has a forecast tailor-made for spectacular Hobie 16 sailing – 20 knots from the North / Northwest, with winds going up to 25 knots in the late afternoon. Bring it on as these are conditions the RSA contingent like.