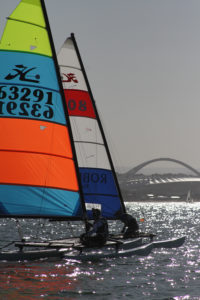 The June 16 – 18 long weekend was characterised by three days of light winds which tested the fleet of 48 yachts in the Hobie 14 Nationals incorporating the Flying Fifteen and Laser Provincials hosted by Point Yacht Club offshore of Durban.

In the main fleet of Hobie 14s, a small but competitive bunch took to the water with 27 boats. There was absolutely nothing between the top two contenders, Blaine Dodds and Garth Loudon, with both of them ending on 9 points each on the log. It was neck-and-neck throughout the regatta between the two big names in South African Hobie sailing.

Dodds added to his impressive tally of 37 national and regional titles claiming the win. The new sailing rules state that the result rests on the last race sailed, regardless if that is your discard race. Dodds finished third, one place ahead of Loudon.

A tired Loudon said after de-rigging his boat, “I did pretty well, it was really close. There was nothing between Blaine and me. I lost it by one position, I scored a fourth in the last race while Blaine scored a third in the fourth race.”

“I prefer the stronger winds, but the conditions were the same for everybody. The youngsters are all light weights, so they did well with that advantage. The lighter stuff is much more of a challenge to race in. I was really impressed with the Race Officer, Kevin (Bingham) who managed to get six races in. Today I don’t think the 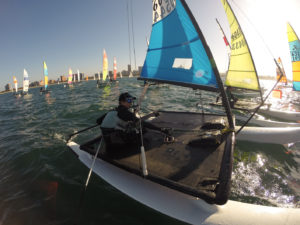 Youngster, Matthew Hall, relishing the light conditions at the front of the Hobie 14 fleet.
Pic by Sophie Thompson

wind got over 6 knots. All in all, I would have to say that everyone did well out on the water. It was tough training for the upcoming Hobie MultiWorlds and Europeans 2017 that takes place next month.” Loudon concluded.

In the small fleet of seven Flying Fifteens, it was the formidable champions of Patrick Harris and Jeremy Kriek who took the honours. The duo have been hard at work preparing for the Flying Fifteen World Championships in Ireland in a couple of months. Harris and Kriek were on top of the podium in three of their races, second in two races and scored a fourth in their final race. Chomping at their heels were Richard Parker and Mike Surgeson who snuck in an impressive two wins, two seconds, a third and a seventh in their first race, ended their provincials two points behind Harris and Kriek after the one race discard.

Cape Town’s Alistair Keytel showed why he was reigning Laser National champion, dominating the first day at the top of the fleet. On the third day, he had mixed fortunes, but his first day of racing saw him win the KZN Provincials.

Pushing Keytel around the course was youngster Sam Lombaard and Campbell Alexander who finished second in the full rig class. Alexander and third placed Henri Frencken are both eyeing out the upcoming World Laser Masters that will be taking place in Croatia. 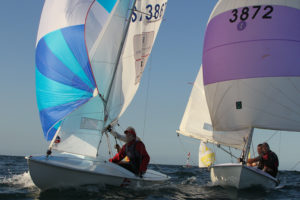 Myles White and Charlotte Marshall hold out Anthony MacMillan and Lorna Daniel as they drift down to the finish during the Flying Fifteen Provincials.Pic by Sophie Thompson

Race Officer, Kevin Bingham had a challenging time on the water with the weather gods throwing loads of curve balls at him. He managed to get in four races on the first day, with the course needing to be reset after the first and second race as the gentle 8 knots clocked around from a south easterly to more of an easterly during the day. The second day, racing was abandoned just after midday as Bingham sat on the water waiting for the little breeze on offer settled to something decent, but the maximum reading he recorded was 4.1 knots, to light for the main fleet. On the third and final day, Bingham managed to get two races in bringing the total up to six races.

The next event for Point Yacht Club is the festive MSC Week held in the first week of July.