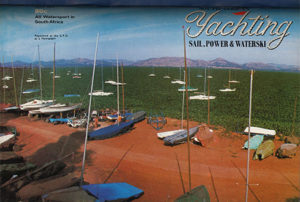 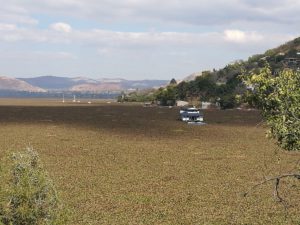 Taken from the road leading to the dam wall on the western side of the TYC, in a south and a south westerly direction. 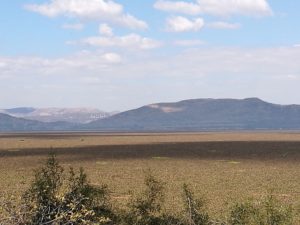 Taken from the road leading to the dam wall on the western side of the TYC, in a south easterly direction.

An NSRI headline – Canoeists caught in hyacinth – caught my attention this morning.

“Our duty crew launched the rescue craft Rotary Endeavor and proceeded to make their way through the thick and compacted Hyacinth.

“With two crew on the bow using oars and their legs to clear a path in front of the rescue craft we finally came alongside the first casually, an adult male, approximately 300m offshore on a fishing canoe. He is a local fisherman who had launched in clear water earlier in the day, but due to the shift in wind he and his friend had become trapped in dense hyacinth.

“With both casualties safely aboard Rotary Endeavour negotiated a path back through the Hyacinth.

“The casualties were handed over to the Estate Security who helped them return to their original launch area.

“Both men were unharmed and required not medical assistance, unfortunately we were unable to recover their canoes and they will make arrangements to recover them once circumstances allow.

“Martha, who works for local residents (the Ball family), first noticed the men in difficulty. Connor Ball and his father Glen are commended for contacting NSRI without delay and for providing updates as to the exact location and progress of casualties. They were instrumental in guiding us to the fisherman.”

According to my sources, there are many rumours going around as to who is going to do what and when, but the relevant departments (Water and Sanitation, and Environment) have not made any firm commitments to remedy the situation. 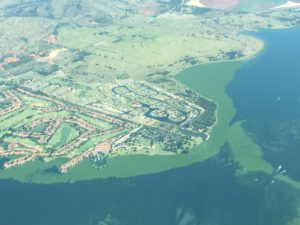 Aerial view of the extent of the problem. 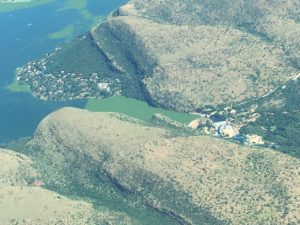 Another aerial view of the water hyacinth at the dam wall.

The facts are :
1) The METSI A ME programme managed by Rand Water on behalf of Department of Water and Sanitation (DWS), which was aimed at cleaning up the dam in general was suspended at the beginning of the year.
2) As part of the programme, a barrier was in place at the bridge over the Magalies river. This kept most of the hyacinth off the dam. Any stray pieces on the dam were removed manually.
3) The barrier, no longer being maintained, broke during the heavy rains in late January, early February, allowing the mass of weed behind it to float onto the dam itself.
4) Since then the weed has been growing almost uncontrolled. (Estimates in April were 95 000 tons of weed on the dam growing at 1000 tons a day).
5) In May DWS put 5 teams of 10 people per team to work to manually extract the weed. At about the same time, the excavator with its 6m wide rake was deployed. The machine is pretty stationary and can only work when the weed is being pushed towards its position at the Ouwer Club.
6) There is no consensus between the local officials (and residents for that matter) as to how to handle the problem – some are vehemently opposed to spraying and others are of the opinion it is the only way to resolve the issue.

Pity as this inland sailing venue, and recreation stretch of water for many diverse watersport interests, could be gobbled up by water hyacinth as it did in 1977.