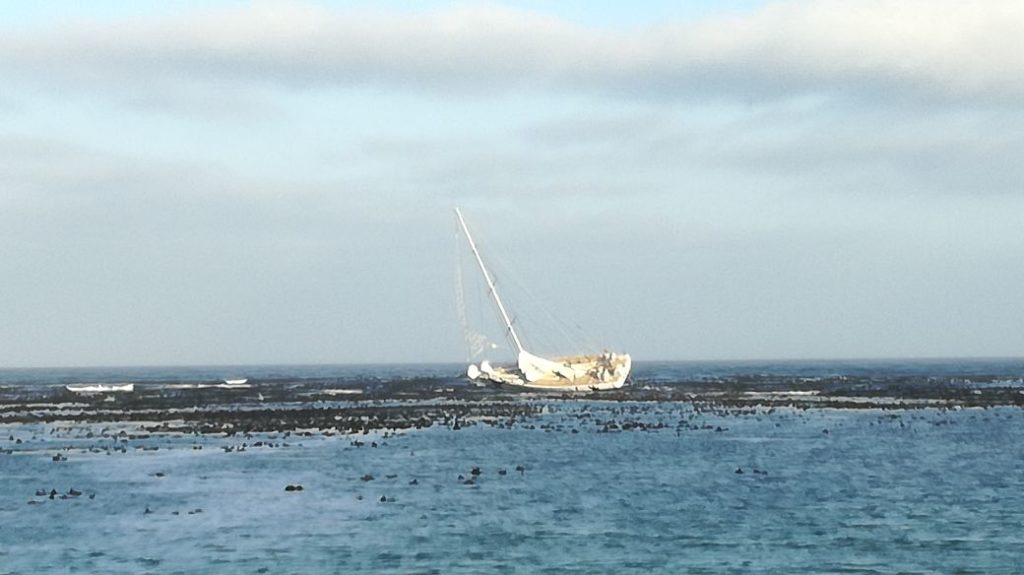 Greenings aground.
pic by NSRI Kommetjie

The Marine Accident Investigation Branch (MAIB) in the UK has concluded its report on the grounding and loss of commercially operated yacht CV24 (Clipper sailing vessel ‘Greenings’ off the Cape Peninsula, South Africa.

The investigation report, published on 27 June 2018, includes what happened, safety lessons learned and recommendations. Here is a summary:

Summary
On the first night of the Cape Town to Fremantle leg of the 2017 – 2018 Clipper round the world race, the UK registered and commercially operated yacht CV24 ran aground on Cape Peninsula, South Africa. CV24 could not be freed and was abandoned with all the crew rescued safely. CV24 had been sailing south and downwind with a spinnaker hoisted, intending to pass clear of land and into the Southern Ocean. During this coastal passage, there was a significant shift in the wind direction which resulted in the yacht being turned towards the shore in order to prevent an unwanted gybe. The skipper realised that a planned gybe would be necessary to head back towards the open sea; however, this turn came too late to avoid running aground. Seven of the 11 other yachts in the race also headed inshore and, in similar circumstances to CV24, CV31 almost certainly grounded but did not stop and was able to continue the race.

Safety lessons
CV24 was not safely manned or operated as the skipper was the only qualified, professional seafarer on board, and there was no dedicated navigator with responsibility for passage planning and execution there was not an effective plan for CV24’s coastal passage along the Cape Peninsula and, when unexpectedly close inshore, the skipper became distracted from navigation by the requirement to supervise the crew on deck. It was also difficult for the crew to monitor the yacht’s position when on deck company risk assessments, operational procedures and taking opportunities to learn from previous groundings could all have provided a higher level of safety management on board Clipper Ventures’ yacht fleet, particularly when operating in remote and often harsh environments

Recommendations
Safety recommendations have been made to the Maritime and Coastguard Agency (2018/116) and Clipper Ventures plc (2018/117 and 2017/118) intended to improve the standards of safety management and conduct of navigation in the Clipper yacht fleet.