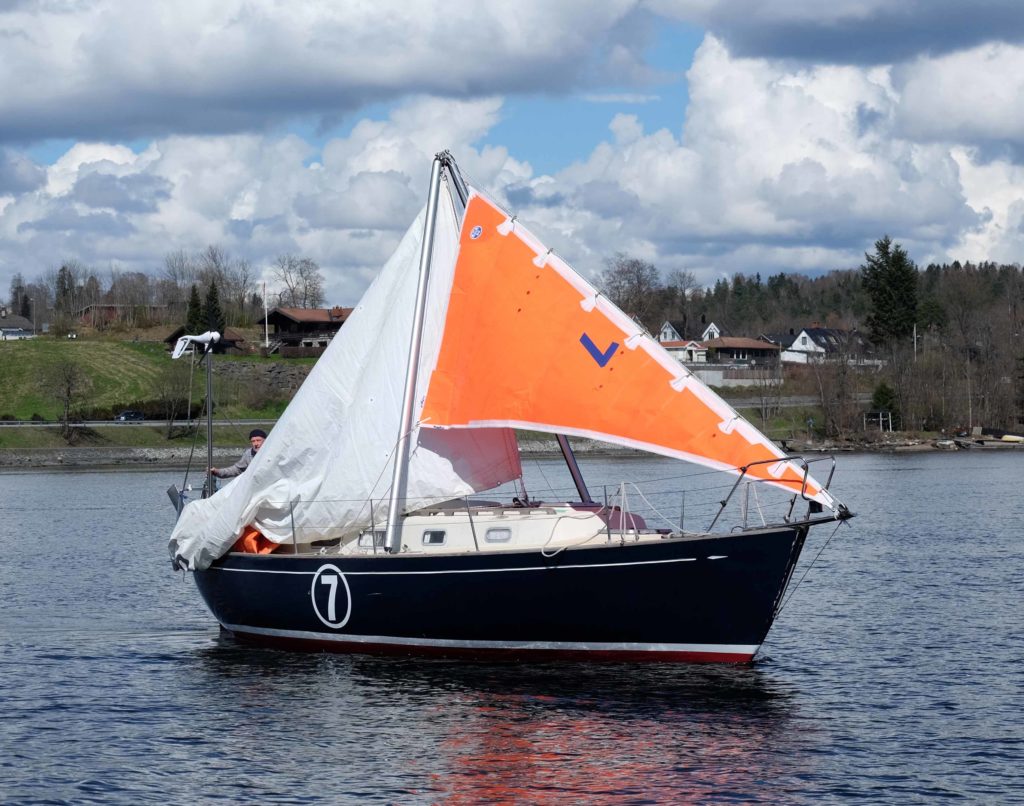 Are Wiig sailing during jury rig trails prior to the Race in April 2018. There is a requirement for each skipper to prove their jury rig and rudder arrangements over a 6-mile triangular course prior to the start.
Pic by J/PPL/GGR

Further details have emerged regarding Norwegian skipper Are Wiig following his capsize and dismasting 400 miles SSW of Cape Town on Monday.

“He was repairing the safety pin (of his windvane self steering) when his yacht capsized and he was thrown out of the companionway and landed in the sprayhood. He got some bruises and ended up in the cockpit, but it is nothing serious. A cut on the ear and a few other places, so there was some blood. The forestay is working as a sea anchor and the boom is saved.

The porthole that broke was over the chart table, so the electrical system got a lot of water on it, but the batteries are probably still fine.

Under deck there is food and oil everywhere. Wiig thinks it was blowing around 35 knots when he capsized, which he didn’t think was much having sailed through this storm for the last 3 days. Ironically, Wiig had just read the book ‘The Voyage of Madmen’ and every boat that hove-to didn’t capsize. The race is over for Wiig and he will not be getting a new rig for now.”

Wiig also recorded a telephone message to his many supporters in Norway saying: This is Are, I just have to say I’m sorry. My participation in the Golden Globe Race has suddenly come to an end. I have experienced some bad weather the last couple of days, and with it, knockdowns. The wind-vane had broken and I was repairing it. I was standing in the companionway and had the parts for the wind-vane in the vice, working on them. And then there was a big sea, and I capsized. When the boat came back up, there was chaos everywhere, the mast was broken, and that means the end of my participation. I’m sorry, I can’t continue, because it was really fun while it lasted. I want to thank everyone who gave me support of any kind. I’m so sorry. I’m sorry…though I’m not sure that ‘I’m sorry’ is the right phrase. This is how the weather is, and you can’t rule over the weather. The seas have been terrible today, and in the end, this was the result. We will have to try another time. Maybe. Thank you.”

Don McIntyre, the GGR Chairman confirmed today that Are Wiig has all the equipment needed to set a jury rig: “All entrants had to prove this during their preparations by sailing a triangular course in the open ocean with their planned jury rig for at least six hours, then submit a comprehensive report as part of their final registration and acceptance into the Race. Wiig completed his jury rig and emergency rudder arrangement off the Norwegian coast last April.”

McIntyre added: “Parts of the mast and sails are still connected off the bow which is holding the boat head to wind and sea. He has located all the parts made specially for the Jury rig and both spinnaker poles are intact. Are reports that he had a rough night with plenty of rocking. He felt it may be easier now to roll over without the mast. He is trying to rest, but finding it very hard with all the jerky motion. He woke during the night thinking she was going over again but did not. The seas are slowly dropping.

Hull compression damage on the starboard side suggests huge impact dropping off wave. The forward bulkhead was damaged and torn from hull by the impact and some deck fittings have been ripped out. There are small holes still to be repaired on deck. His YB3i main tracking unit is NOT operating and his main YB3 text unit is damaged so he has activated the spare YB3 sat texting unit stored in the yacht’s emergency grab bag. His solar charging is damaged, but reparable and electrical wiring holes are leaking water into boat. Engine runs, but Wiig will not complete final checks until he can confirm that there are no ropes in water. He has approx. 120 litres of fuel so about 40 hours motoring at 5 knots = 200 miles. The hull is sound and strong enough for voyage to Cape Town. Wind is dropping but small seas continue to break over the boat. He feels safe.

We feel that Are Wiig is now fully in control of his boat and in good health. He has a good plan to sail to Cape Town under Jury rig. LIVE Tracking has been restored to the GGR tracker and Sat comms are all working. We will provide him weather reports and maintain CODE ORANGE till he arrives safely in Cape Town.”

Overnight, all other GGR skippers sent supportive messages to Wiig including Ireland’s Gregor McGukin who was 40 miles NE of Wiig‘s position when the upset happened. He texted: SORRY TO HEAR ABOUT ARE. AM CLOSE BY IF ASSISTANCE NEEDED. He had been running under bare poles and streaming warps in the severe conditions yesterday, but this morning the Irishman had even more reassuring news: BACK ON TRACK. SEA STATE MUCH BETTER. Latest forecasts predict even calmer conditions over the next couple of days which will make life much easier for Wiig to set his boat up to sail north to Cape Town

In Cape Town, Harbour Master Captain Steven Bentley, has promised his support, just as the harbour authority did for fellow GGR skipper Philippe Péché a week ago. He writes: “We will keep an eye on his progress, and be available to assist him into Cape Town. Should his jury rig course take him into False Bay, between Cape Point, and Cape Agulhas, he should make best course possible to False Bay. I am able to arrange a safe marina berth at False Bay Yacht Club, and In better local weather conditions, he can translocate from FBYC to the Royal Cape Yacht Club with assistance from local club members. I will watch his progress, and aim to get him ashore and his yacht safely berthed, as soon as possible with the least risks.”

Meanwhile, another GGR skipper may well be forced into Cape Town for lack of water. French entrant Loïc Lepage sailing the Nicholson 32 ‘Laaland’ reports that he has still not caught much rain water and has only enough to get as far as Australia. His SSB radio and YB3 Texting unit are not working and he has had to resort to messaging on his sat phone direct to Race HQ. Lepage is currently 1,000 miles west of The Cape of Good Hope, and without the ability to pick up weather forecasts, may well decide to head for Cape Town to fix these issues before continuing on in the Chichester Class.