As race leader Jean-Luc Van Den Heede closes on a very stormy Cape of Good Hope, Race organisers posted two navigation warnings to the fleet on Sunday, and have now raised the southern limit to 42°S from Longitude 40°E to keep the fleet clear of the worst conditions in the South Indian Ocean.

Don McIntyre, the Race Chairman explains: “This is early Spring in the Southern Ocean and the fleet will be 2-weeks or more ahead of Sir Robin Knox-Johnston 50 years ago in rounding the Cape of Good Hope and entering the Roaring Forty latitudes. From the satellite images, which of course were never available to the original Golden Globe Race skippers, it is clear that the remnants of the winter storms are still running through the 40 and 50 latitudes. Raising the exclusion line to 42°S now is a prudent measure to keep the 2018 GGR fleet from straying into the worst of this weather.” 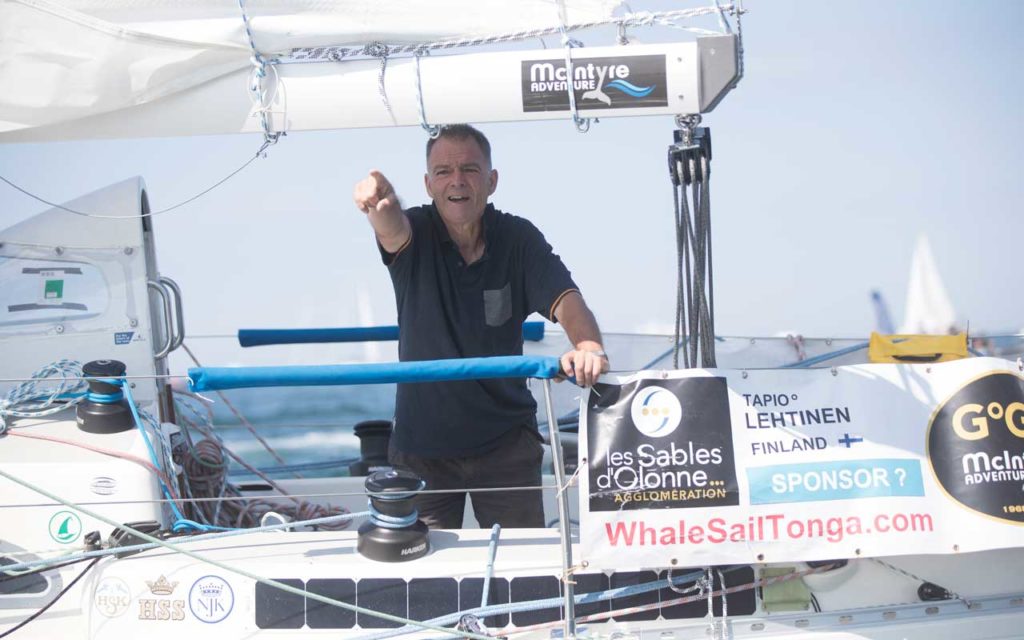 No stopping! Tapio Lehtinen is determined to complete GGR circumnavigation without electricty if necessary.

Van Den Heede and his followers still face some uncomfortable sailing. South of the Cape, the Agulhas Current is running in a clockwise cauldron at between 3-4 knots, which when mixed with strong south westerly winds, is creating a vicious sea state for these small yachts to cross.

Van Den Heede’s Rustler 36 Matmut will be the first to experience this during the latter part of this week followed by second placed Dutchman Mark Slats currently trailing the Frenchman 515 miles astern.

Behind them, the 10 other sailors within the GGR have been reporting mixed weather.

Indian Abhilash Tomy (Suhaili replica Thuriya) has been dogged by light winds all last week as a high pressure system followed his every move. 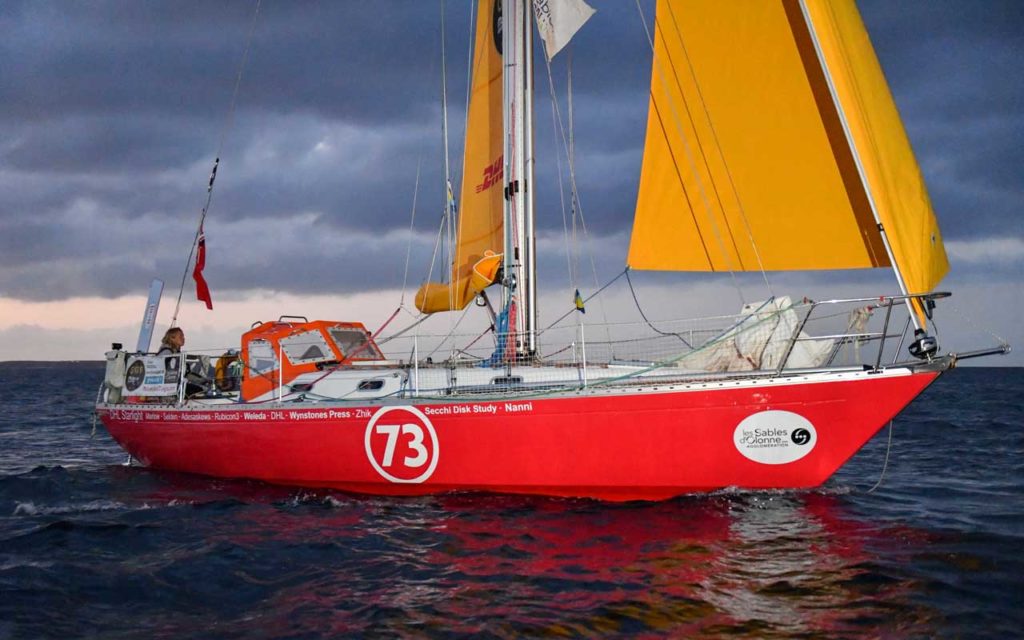 Britain’s Susie Goodall (DHL Starlight), currently 450 miles ENE of Tomy, has been facing strong head winds and rough cross seas all week – so much so that to tack would force her to head straight into them. That is why she is heading North Easterly today in search of a more favourable wind further east. She fears that to tack south right now, the sea state would stop her Rustler 36 in its tracks. More worryingly, Susie reported today that some of the chain plates connecting the yacht’s rigging to the hull have lifted some 2mm above the deck and are now letting in water. She is monitoring the problem.

Susie also reported that her yacht has been sailing through a large area of flotsam and jetsam in recent days some of which has been hitting the hull with quite a bang.

Ireland’s Gregor McGuckin (Biscay 36 Hanley Energy Endurance) has made most progress this past week, moving up from 8th to 5th, despite running into stray ropes, fishing nets and other debris. This worrying ecological state in mid South Atlantic was first underlined a week ago when Abhilash Tomy reported hitting an unknown object hard.

Two other skippers have reported bigger issues. Finland’s Tapio Lehtinen is suffering a power meltdown on his Gaia 36 Asteria. Her engine stopped working two weeks ago, the yacht’s solar panels, which should be providing a 300watt trickle charge are producing barely 5% that amount, and the connections to his water generator keep burning out. Tapio made an unscheduled call to the Race Organisers yesterday to discuss the possibilities of running ‘Dark Ship’ for the remainder of the circumnavigation. Bernard Moitessier did so in the first Golden Globe Race 50 years ago, but this GGR requires at least one position report a day for safety reasons.

Don McIntyre explained: “Tapio could turn off all power in the boat, including his satellite tracker. He is looking at the option of hot-wiring one or more of his solar panels direct to the ship’s batteries and that would allow him to send us one position update a day. Tapio is a ‘stayer’. He is not considering stopping to make repairs. He is determined to battle on regardless”. 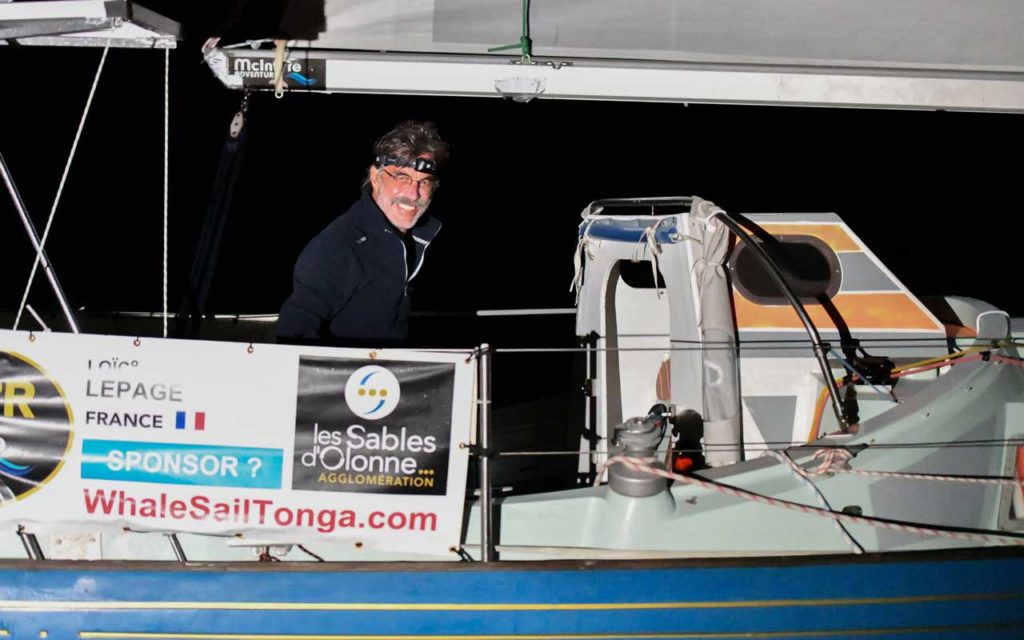 Loïc Lepage is running short of fresh water and praying for rain.

Frenchman Loïc Lepage (Nicholson 32 Laarland) may not have that option. His fresh water supplies are running low following a unusual lack of rain experienced in the Doldrums. He is now considering a stop in Cape Town which would demote him to the Chichester Class.

Fellow Frenchman Philippe Péché has remained silent over his intentions to stop in Cape Town to replace the broken wind vane self steering system and tiller on his Rustler 36 PRB, but has been making remarkable progress in keeping pace with Van Den Heede while hand-steering all week. At the current rate, he is likely to reach Cape Town on Thursday or Friday.

One other man with worries is Dutchman Mark Slats. Now down to 32°S, the second-placed Dutchman is beginning to feel the cold, and reported last week that he forgot to pack gloves for the Southern Ocean stages. He has hanked headsails rather than roller furling on his Rustler 36 Ohpen Maverick and it is going to be cold changing sails on that foredeck!