Golden Globe Race. It Was Never Going to Be Easy 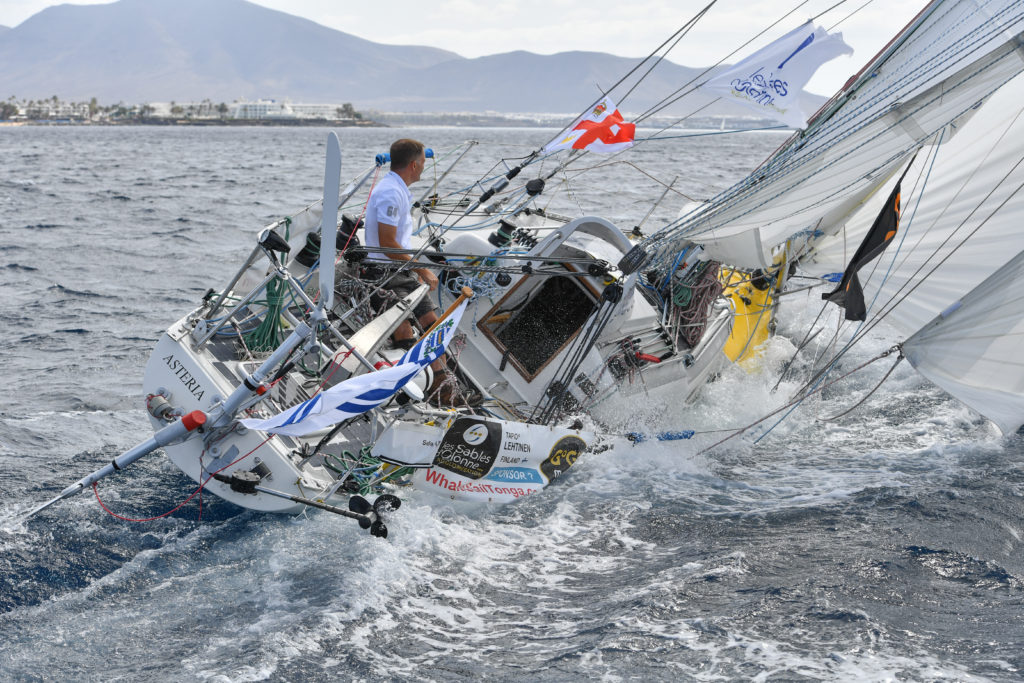 Tapio Lehtinen (FIN) sailing his Gaia 36 Asteria through the Marina Rubicon gate off Lanzarote. Asteria has the lowest freeboard of all the yachts in the GGR.
Pic by Christophe Favreau/PPL/GGR

This was never going to be an easy race, and so it is proving to be.

With old slow boats, only traditional methods of navigation permitted, and adventurers as the singlehanded skippers, one always knew that the race would be slow and the attrition rate high.

From a fleet of 17 boats, there have been 5 retirements to date, with the race not even into its third week. But those soldiering on all appear to be overcoming the problems of singlehanded sailing in old boats.

What is interesting is that four skippers, Mark Slats, Philippe Péché, Estonian Uku Randmaa and French veteran Jean-Luc Van Den Heede all shared the lead at some stage during this first week at sea. More significantly, they are all sailing Rustler 36 yachts. 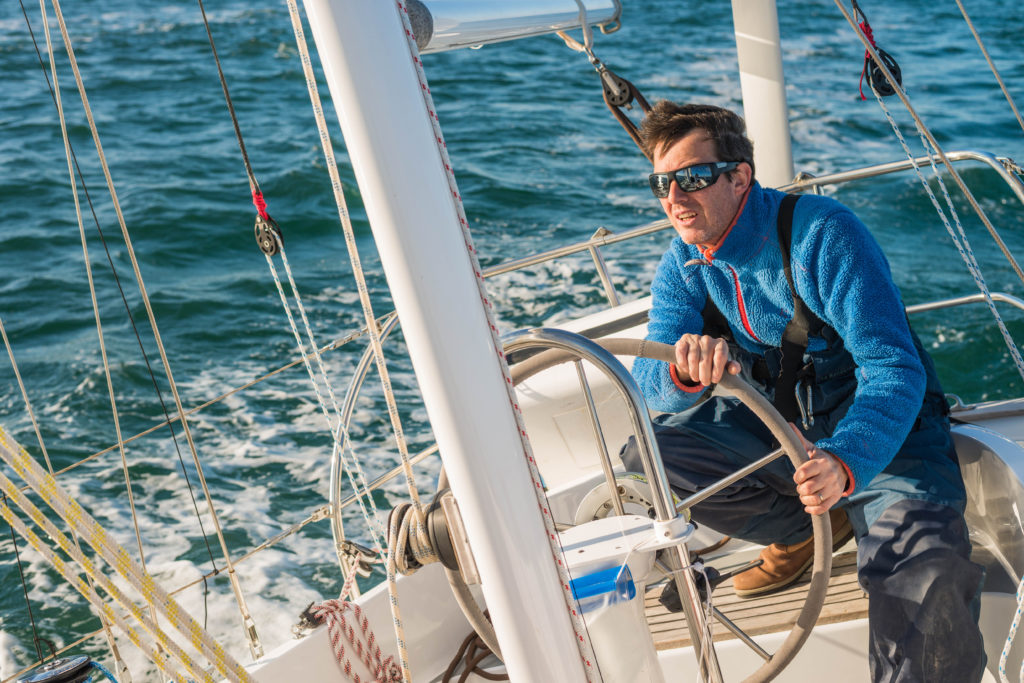 Forced to hand steer for hours on end due to failing self-steering systems led to exhaustion and frustration for Antoine Cousot.
Pic by Christophe Favreau/PPL/GGR

Mark Slats (NED) Rustler 36 Ohpen Maverick is carrying a pair of 13ft (3.9m) oars to scull his way through calms. Slats, who smashed the solo transatlantic rowing record by 5 days in December 2017, believes he can row for up to 9 hours a day and make 20-30 miles on his rivals. The oars can also act as his emergency rudders and as a jury rig.

With the race only a few days old, Italian Francesco Cappelletti, whose late preparations prevented him starting on time withdrew due to his uphill struggle to complete safety inspections and a 360 mile solo trial sail.

On 9 July Susie Goodall highlighted a problem most are facing: Low cloud cover is restricting their ability to get a sun sight. “I’m worried about finding the Canaries” she reported. GPS would make life just so much easier, but this is a traditional race where only the ‘tools’ used in the Golden Globe Race 50 years ago are permitted. 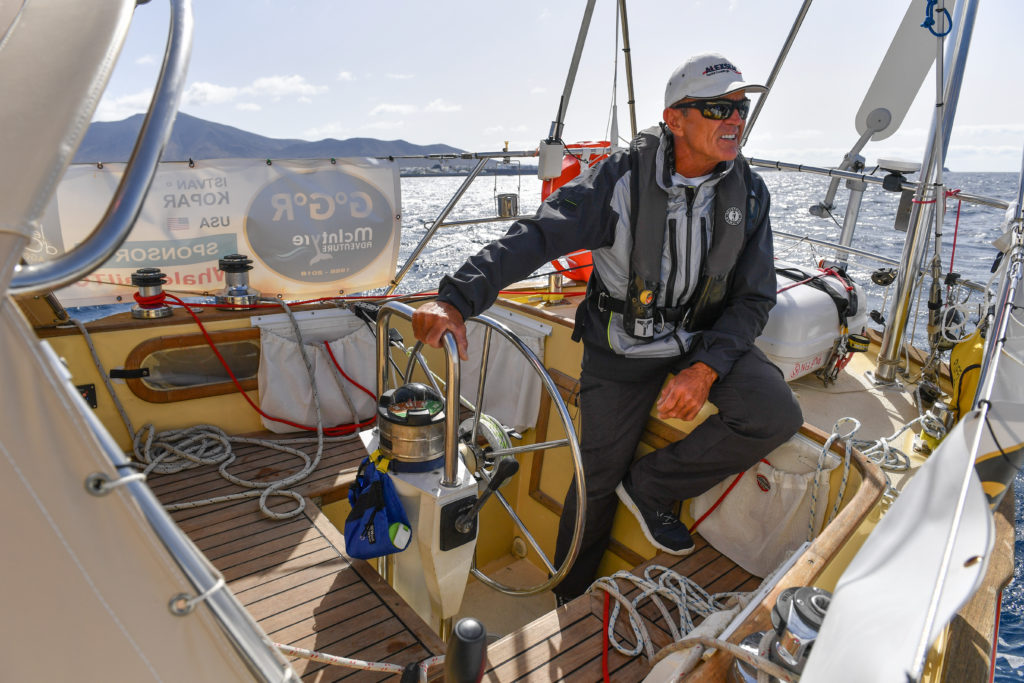 Forced to hand steer for hours on end due to failing self-steering systems led to exhaustion and frustration for Antoine Cousot.
Pic by Christophe Favreau/PPL/GGR

Ertan Beskardes, the Turkish-born British skipper from Bournemouth informed Race HQ by satellite that he was pulling out of the Race for personal reasons. Later, he informed followers on Facebook: “Not talking to my family regularly to share the daily experiences has sadly taken the joy and happiness from this experience. These feelings gradually got worse until nothing else mattered except to talk to them. This wasn’t an experience I was prepared for and this decision was the hardest I’ve ever had to make in my life. I love solo sailing but felt very lonely with no contact.”

Others too were facing practical as well as emotional issues.

Both Frenchman Antoine Cousot and his US/Hungarian rival Istvan Kopar were experiencing continued problems with their wind vane self steering systems – essential gear when they reach the Southern ocean – and were spending long hours steering by hand. Cousot has indicated that he intends to pull in at Lanzarote to make repairs, but not yet declared whether he intends to gain outside assistance.

French Golden Globe Race leader Philippe Péché threw away a hard-fought 3½ hour lead at the first gate in this 30,000 mile solo non-stop round the world race after mistaking the lighthouse marking the southern end of Lanzarote. It was not until he had reached the northern tip of Fuerteventura in the Canaries that the Frenchman realised his mistake and had to turn back into the wind and beat the 7 miles back. Why he missed the lighthouse’s distinctive pattern of flashes in the early dawn is not fully explained.

This time wasting closed the gap between himself and second placed Mark Slats and to little more than 9 miles. The Dutchman was delighted. “I’m very happy and feeling strong. I rowed for 6 hours when the winds got very light around Cape Finisterre” he told organisers.

Third placed Frenchman Jean-Luc Van Den Heede was a further 6 miles behind was equally delighted with the news. The 73 year-old, who has five previous circumnavigations under his belt, said, “I’m very comfortable with my position. This is a long race, and to win, you first have to finish.”

The next compulsory turning gate is off Hobart, Tasmania

By day 16 both Are Wiig and Susie Goodall reported problems: Wiig has blown out a spinnaker, while Goodall has found that the solar panels on her British yacht are not working and took a following wave onboard which flooded the cabin.

Australian mountaineer and adventurer Kevin Farebrother pulled out of the Race at this point, disillusioned by solo sailing and lack of sleep.

Farebrother, a former Paratrooper who has made three successful assents up Mt Everest, conceded “I’m not cut out for solo sailing.” He told race organisers that he could not contemplate sleeping below decks. “For me it is like getting into the back seat of a moving car to sleep when no-one is at the wheel. As a result, I’ve had very little sleep over the past two weeks…My boat is now for sale!”

Antoine Cousot, Istvan Kopar and Nabil Amra who have been struggling with faulty wind vane self steering equipment.

For Cousot, the problems had become so overwhelming that he decided to pull in to Marina Rubicon to make repairs.

Kopar, who is using the same WindPilot system as Cousot, told Race organisers yesterday. “It is very frustrating. “I can’t even go down below to use the heads [toilet] without the boat going out of control. I have been hand steering since the start and have no energy for anything else. This is the big issue and the biggest challenge will be trying to control the boat in the Southern Ocean. That is really scary. I’m sure I’ll be knocked down several times. If it wasn’t for my sponsors, I would give up.” 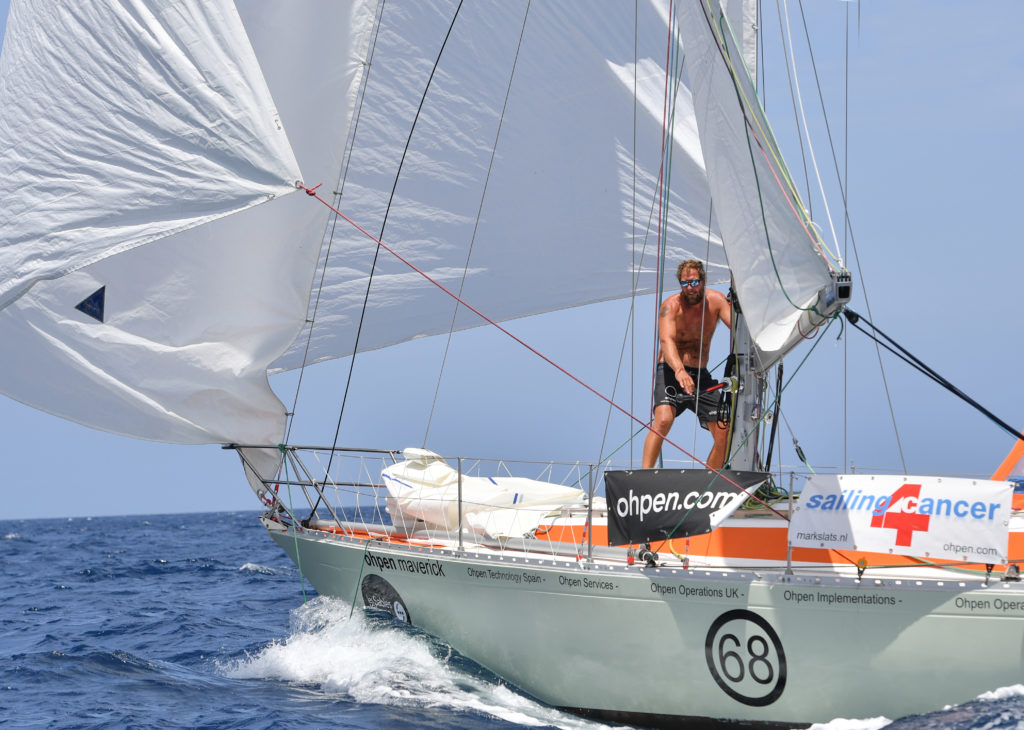 One consoling thought is that Sir Robin Knox-Johnston suffered similar problems 50 years ago and was forced to hand steer for two-thirds of his solo non-stop circumnavigation in his yacht Suhaili. “Robin did it, so I will give it a go too” He said stoically as he sailed through the Marina Rubicon gate in last place to chase after the fleet.

Nabil Amra has even worse problems. A weld on his French made Beaufort self-steering failed so he is faced with either putting in to an African port or sailing back upwind to the Canaries to affect repairs.

By day 18 Nabil Amra formally announced his retirement from the race. He reported that a weld had broken on his Beaufort wind vane self steering. As he battled his way across 35 knot winds en-route to Tenerife, the Palestinian messaged: “Wind and waves in the teeth…Sailing is better with friends.” This was followed by: “Violently ill now..No sleep for 4 days.”

American Istvan Kopar announced that he intended to stop in the Cape Verde Islands to replace his self-steering system and drop down into the Chichester Class for those who are forced to make one stop during their solo circumnavigation.

Cousot stopped in Lanzarote on Sunday complaining that his WindPilot wind vane steering could not control his Biscay 36 Métier Intérim, but after two days in port it became clear as he left Marina Rubicon on yesterday that his decision to drop down to the Chichester Class, was as much mental as mechanical.

In a candid interview with Race Organisers, Cousot said: I needed the break just to relieve the pressure. It was important for me mentally to make sure that everything is working…And it was good to have a hamburger and a beer!

This is a personal challenge – a huge adventure. You have no idea, even reading Moitessier’s book and those of other singlehanders, about what it is like being alone. They talk about the sea and the environment, but they don’t talk about what is going on inside.”

The fleet (on day 18) is spread 500 miles astern, but a close fight is developing mid-fleet with just 47 miles dividing Susie Goodall now back up to 5th and 9th placed Uku Randmaa