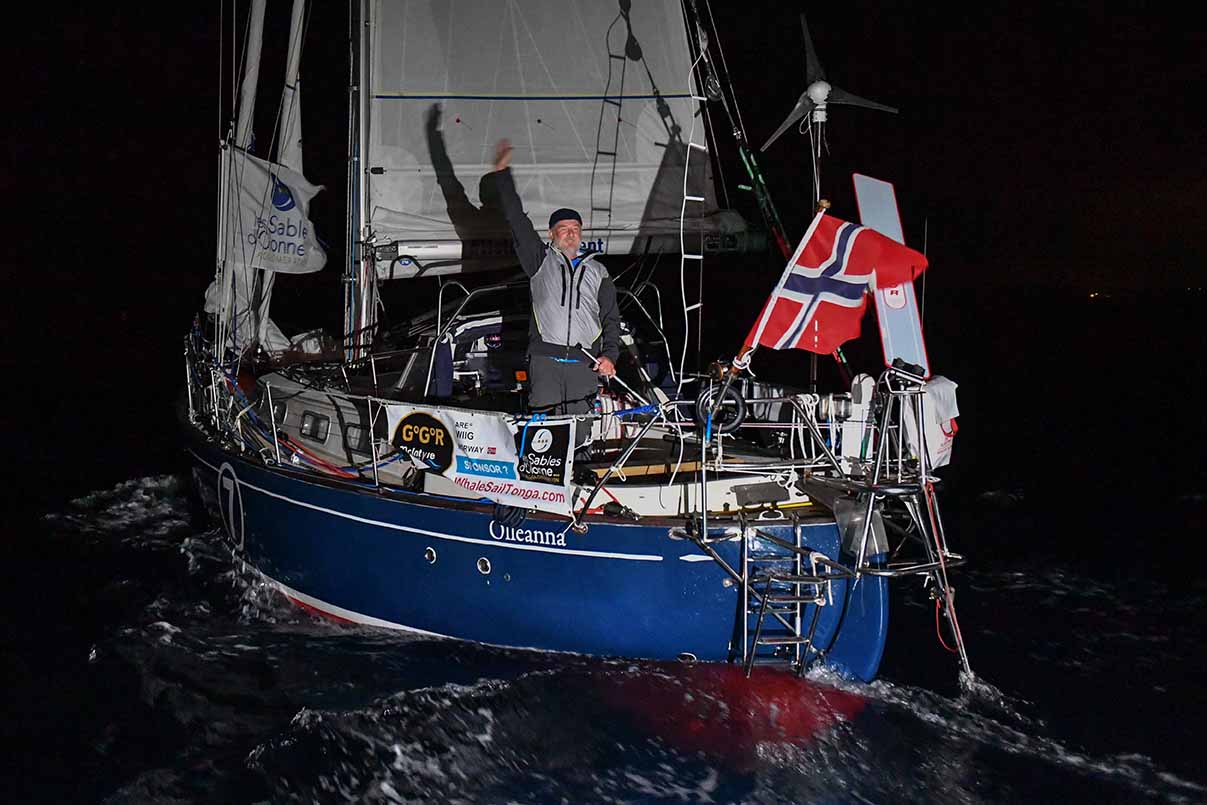 Norwegian Are Wiig in better times on Olleanna.
Pic by Christophe Favreau/PPL/GGR

On day 58 of this global singlehanded marathon Are Wiig made a satellite phone call to Race HQ reporting that his 32′ yacht Olleanna had been rolled through 360° and dismasted some 400 miles south west of Cape Town.

The 58-year old yacht surveyor from Svelvik, Norway is one of 12 sailors competing in this solo non stop race around the Globe, and was below decks at the time with the yacht lying hove-to in 35 – 45knot winds and 7 – 8m seas. One cabin porthole was lost, but Wiig reported that he was not injured and there was no damage to the hull. He quickly cut the mast and rig away from the hull but left the forestay and it is currently hanging from the bow of the boat in the water with the sail attached acting as a sea anchor.

Don McIntyre the GGR Race Chairman who answered the call from Wiig reports “Wiig sounded confident and very much in control. His windvane self steering system had broken, and before going below, he had been hand-steering since. Down below is a mess, but he plans to tidy up and monitor the situation and then develop a plan. He has everything onboard to make a jury rig. Wiig confirmed that he had NOT activated his EPIRB and did NOT require any assistance at this time. All his safety equipment is secure and in good order. His satellite communications are working well and he has full electrical power.”

Race HQ in les Sables d’O’lonne is monitoring the situation and alerted rescue authorities in Cape Town and the fleet of race yachts. The nearest competitor to Are Wiig is Ireland’s Gregor McGuckin sailing the Biscay 36 Hanley Energy Endurance, some 40 miles north east of Wiig’s position, but he too is facing the same strong westerly winds, reporting earlier today: 3RD NIGHT OF GALES, NO SAILS, TOWING WARPS. ALL WELL, JUST TIRED…