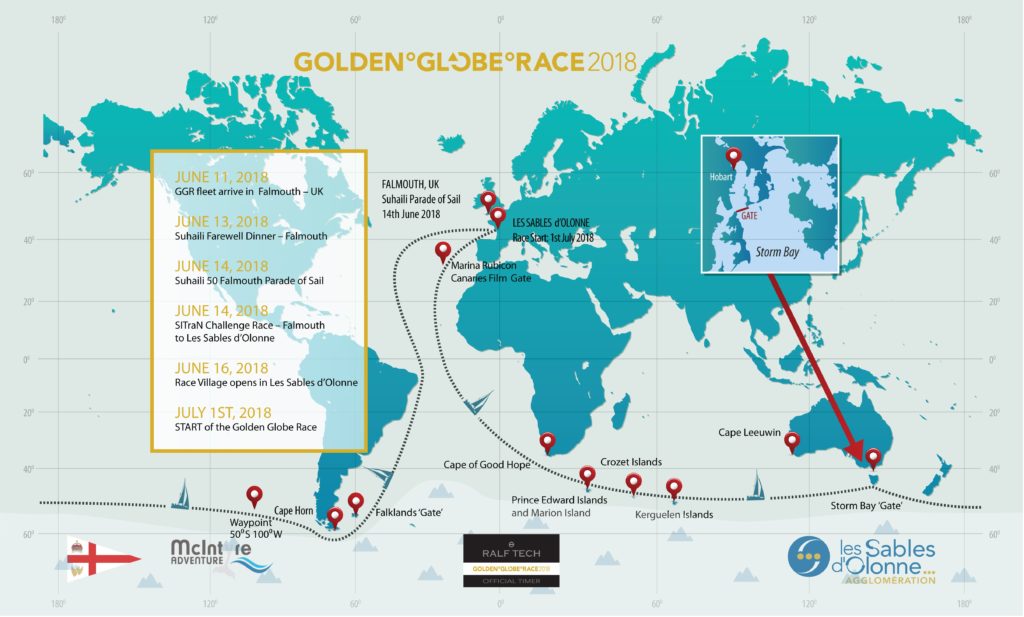 With 4 months to the start of the 2018 Golden Globe Race from Les Sables d’Olonne, France on July 1, the number of entrants now stands at 20, representing 13 countries.

These skippers have a remarkable range of backgrounds. Professional sailors and adventurers dominate, but they also include an engineer, foreign exchange trader, hydrographer, pilot, tailor and university lecturer. All have considerable short – and single-handed sailing experience, one having logged five solo circumnavigations. They hail from Australia (2), Estonia (1), Finland (1), France (4), Ireland (1), India (1), Italy (1), Netherlands (1), Norway (1), Palestine (1), Russia (1), UK (3), and the USA (2). Their average age is 47. The youngest, Britain’s Susie Goodall is 28; the oldest, French solo veteran Jean-Luc Van Den Heede is 72.

Three skippers have withdrawn: Gustavo Pacheco (58) from Brazil, American Roy Hubbard (28) and French veteran Patrick Phelipon (64). For Pacheco, retirement is a bitter disappointment. He had devoted the past two years to preparing his Lello 34 Double Helix in South Africa and had recently completed a proving trial across the Atlantic to Rio de Janeiro, but with no sign of sponsorship, he didn’t have the money to complete preparations as he wished. Hubbard, one of the youngest entrants, who recently competed on two legs of the Clipper Round the World Race to gain experience in the Southern Ocean, says that he has learned the need to extend his sailing resume before attempting a solo circumnavigation and has deferred his entry to the next GGR in 2022. He is now planning a voyage to Greenland and back aboard his Babe 35 Duke during the summer of 2019.

Race founder Don McIntyre says: “18 of the original 34 skippers to sign up for this 50th Anniversary Race have been forced by circumstances to either retire or defer their entry to the next GGR. We all knew from the outset that the hardest part of this challenge was simply getting to start line in a race-ready state. It is a measure of their professionalism and the strict safety measures prescribed within the race rules that none have felt pressured to press on against all the odds as Donald Crowhurst and others did in the first Sunday Times Golden Globe Race back in 1968. Those that remain have a very high chance of completing the Race, and those that have made the decision to abstain this time round, will be welcomed as entrants in the next GGR.”

In Transit to the Start
Australian entrants Mark Sinclair and Kevin Farebrother are the first to ship their yachts to Europe for the start. Sinclair’s Lello 34 Coconut was lifted aboard the MSC Luisa in Adelaide on 27th January, and Farebrother’s Tradewind 35 Sagarmatha was loaded aboard the same ship when she docked in Perth. The ship is due to berth in London on March 8.

Displaying the friendly banter that exists between these two Manchester UK born competitors, Mark said: “Kevin has told me that Sagarmatha is positioned ahead of Coconut on the ship. He should make the most of it because this is the only time his yacht will lead mine!”

Indian skipper Abhilash Tomy is also planning to ship his Suhaili replica yacht Thuriya from Mumbai to Europe in March and other competitors in the USA, Finland and Norway will be on the move as soon as the ice melts.

Turkish born British entrant Ertan Beskardes is already on the move. Having refitted his Rustler 36 yacht Lazy Otter in Fertilia Marina, Sardinia over the winter, he is currently completing his 2,000 mile solo trial voyage en-route to Falmouth.

The first port of call for all 20 entrants is Falmouth UK between 11-14th June for the Suhaili 50 Falmouth Parade of Sail celebrating the 50th anniversary of Sir Robin Knox-Johnston’s departure from there back in 1968 at the start of the original Sunday Times Golden Globe Race.

The SITRaN Challenge Race from Falmouth to Les Sables d’Olonne starts immediately after the Parade of Sail on June 14.