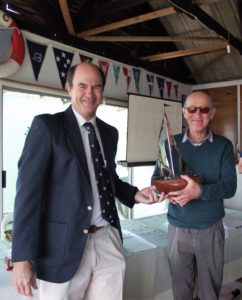 For the prize giving, as well as the awards of the club trophies awarded to the winners of the various season series, the prestigious club trophies were awarded.

The Angus Hay trophy for the member who for the year has made the greatest contribution to the Club was awarded to Tony Bowen.

The Peter Grant trophy for the club member making the most contribution was awarded to Maurits Lammers.

For the juniors, the Paul Trevelyan Cup for best progress was awarded to Kyle America.

The Dee Trophy for best beginner was awarded to Tristan Boshoff. 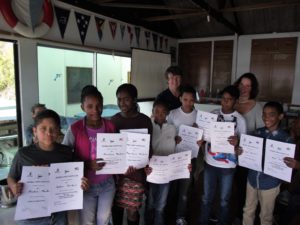 Children from the Pacaltsdorp Primary School were awarded Certificates of Sailing Achievement. At the back are Sailing Coach Evelyn Osborne and Swimming Coach Melody Hodgson 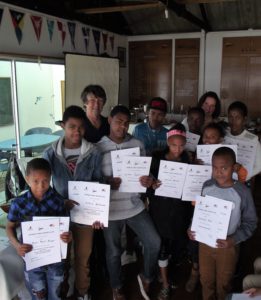 Children from the Hoekwil Primary School were awarded Certificates of Sailing Achievement. At the back are Sailing Coach Evelyn Osborne and Swimming Coach Melody Hodgson 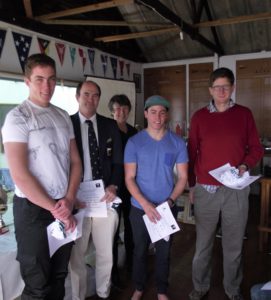 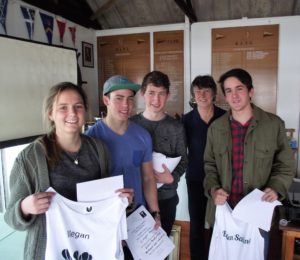 Certificates of Sailing Achievement in respect of their sailing training were awarded to club cadet members from the Pacaltsdorp Primary School, Hoekwil and George Schools. These youngsters were introduced to Sailing through the S.A. Sailing/Lotto Development programme.

Our youth members, who have qualified as assistant and level one Sailing Instructors, were recognised – Chris du Toit, Ryan Hodgson, Matthew de Villiers and Chris Kennedy.

For the Annual General Meeting, most of the existing committee were re-elected, with Di Turner as President and David Laing as Commodore. Tony Bowen stood down as Treasurer, replaced by Hans Hefer. Andrew de Villiers was elected as Bosun. Sue du Toit is now Secretary, with Melody Hodgson and Charles Norman as additional committee members.