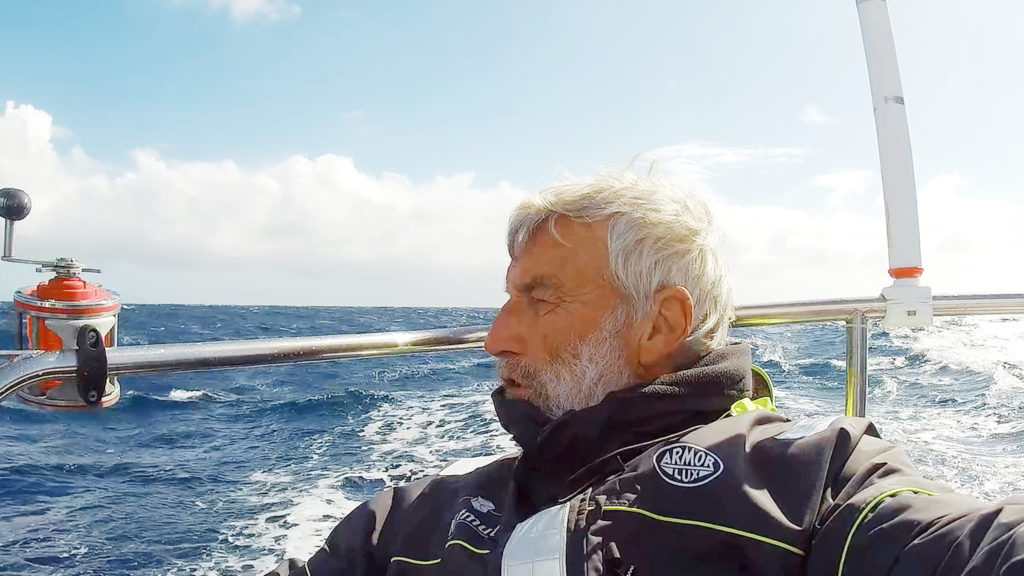 Jean-Luc Van Den Heede led the Golden Globe Race fleet of solo sailors round Cape Horn on Friday having extended his lead on all but second placed Dutchman Mark Slats during a week when those trailing up to 8,500 miles behind all faced serious trials.

Both Australian Mark Sinclair and Russia’s Igor Zaretskiy are now heading for ports in Australia to clean off barnacles and make repairs. Sinclair, who is also running perilously short of drinking water, is heading for Adelaide, his home City after being thwarted by sharks on two occasions during the past week from diving over to scrape the hull of his Lello 34, ‘Coconut’.

Zaretskiy reported yesterday that he had motored to check drag the hull of his Endurance 36 Esmeralda and determined that the barnacles are now reducing her speed by 2.5 knots. He now intends to slip the yacht at the old whaling port of Albany on the South West corner of Australia. When they stop, both skippers will be relegated to the Chichester Class, leaving just 6 of the original 17 starters still competing for Golden Globe honours.

The lack of breeze that frustrated progress in mid fleet for much of last week has been replaced by 20 – 30knots winds from the South and West, but Estonian Uku Randmaa, Britain’s Susie Goodall and American/Hungarian Istvan Kopar all face continuing problems.

Randmaa, who lost 300 miles on the race leader over the past 6 days, is back doing 6.2 knots in the right direction today, but has still to clear barnacles from the bottom of his yacht ‘One and All’. Goodall (‘DHL Starlight’), now half way across the South Pacific some 2,700 miles from South America, is running desperately short of water, and American/Hungarian Istvan Kopar who, like Goodall, lost 400 miles on the leader this past week, has reported major problems with the pedestal steering system on his Tradewind 35 ‘Puffin’.

The bearings in the pedestal gearbox are breaking up under the strain and may not last much longer. In an effort to reduce the chance of a complete break-down, Kopar fitted his backup emergency tiller, but that too failed within 12 hours. His last resort is to fit his emergency rudder,’ but that will mean hand-steering for the remaining 11,000 miles back to the finish in Les Sables d’Olonne. To cap all this ‘Puffin’s’ main halyard snapped last night, and Kopar must wait for calmer conditions to climb the mast and replace it.

6th placed Tapio Lehtinen has dropped almost 700 miles behind this week, his barnacle infested yacht ‘Asteria’ was unable to make any real progress against strong head winds all week. Worse, forecasters are predicting this unusual easterly airstream will continue for another 5 days at least.

In a special radio hook-up with members of the International Cape Horners Association attending their annual meeting in Portsmouth UK yesterday, Jean-Luc Van Den Heede reported that repairs to the damaged rig on his Rustler 36 ‘Matmut’ were standing up well. “I am on course to pass west of the Falkland Islands and have winds on the beam. I am taking it easy with three reefs in the mainsail. If I was racing, I would only have two. I do not want to stress the mast any more than necessary and will have to nurse it all the way back to Les Sables d’Olonne.”

The 73-year old Frenchman confirmed that this had been his 10th rounding of Cape Horn. “Six times the right way (west to east) and four times the wrong way (against the prevailing winds). “The last time was in 2014 when I was cruising in the area and we stopped to meet the lighthouse keepers. Conditions were good this time round and I was doing more than 8 knots when heading up through the Straits de la Maire.”

One old Cape Horner asked “What are you missing most?”

“Nothing” came the reply.

“I chose to be here and am very happy. I know that my wife and friends are waiting for me to return and look forward to that.”

Since Van Den Heede’s rig problems 3 weeks ago, Slats has clipped almost 700 miles off ‘Matmut’s’ lead, but these past 6 days, the gain has been only 43 miles. To finish ahead, the Dutchman knows he must set an average 20% faster than the Frenchman. The first chance of doing this will come in 5 days time when he is expected to reach the Horn and when ‘Matmut’ is slowed by head winds. But like Van Den Heede, Slats will earn his passage round this infamous Cape because forecasters are predicting another storm just as he rounds the Horn or shortly after.