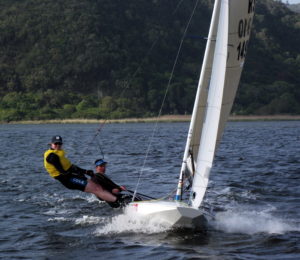 Ferdinand Holm and Georgou Divaris were the overall winners of the Fast fleet, with their Fireball. 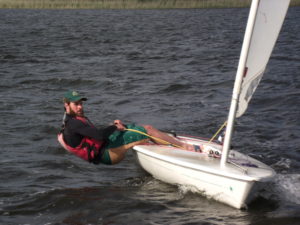 John-Marc Olivier was the leading Laser and third overall in the Fast Fleet. 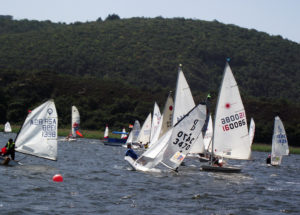 The start of the race on Saturday afternoon, in a strong, gusty wind. 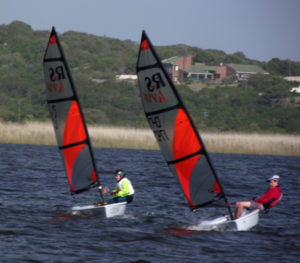 Ashley Layland (l) and James Vonk (r) sailing their Tera Pro’s. James Vonk was the overall winner of the Slow fleet, with Ashley in 4th place. The GLYC team of Senior and Youth sailors, winners of the Fast Fleet section of the GLYC Inter Club regatta. 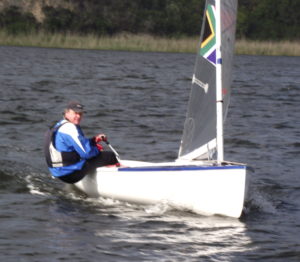 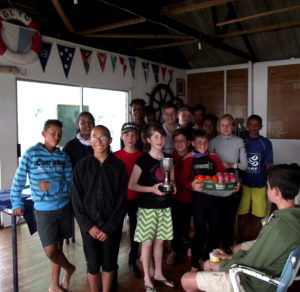 The youth team of Mossel Bay Yacht and Boat Club were the winners of the Slow Fleet section of the GLYC Inter Club regatta.WIN

Two fleets were created – a Fast fleet (those with ratings less than 1200) and a Slow Fleet (those with ratings greater than 1200). The Fast Fleet had 23 boats, comprising Fireballs, Lasers, Dabchicks and Hobie 14. The Slow Fleet had 21 boats comprising Optimists, Teras, Picos, Toppers, Qbas, Feva and Topaz. Of this fleet, fourteen came from Mossel Bay, despite logistical problems getting all those boats and sailors along the N2.

The first race was started at 12h00 on Saturday in a light breeze, which unfortunately faded and the race was abandoned for the Fast fleet, while the Slow fleet were just able to complete a shorter single triangle. The fleet was sent to shore for lunch to await a better wind.

By 14h00, a strong south wester arrived and racing could resume. However, this wind, 15 to 20 knots, proved to be too much for many and the safety boats were busy rendering assistance. The more experienced sailors were able to cope and especially the Dabchicks revelled in the conditions. The wind later abated to under 15 knots and three races could be completed in the afternoon.

On Sunday, there was just a very light south-easter, causing the sailors to employ their light wind sailing skills. Two shortened races were completed, a total of five races for the Fast fleet and six for the Slow fleet. This allowed for one’s worst race to be discarded.

In the Fast fleet, consistently up front were the GLYC Fireballs of Georgou Divaris/Ferdinand Holm and David Laing/Chris du Toit, closely pursued by KYC’s Finn sailed by Dudley Isaac.

GLYC’s top Laser, sailed by John-Marc Olivier did well in the lighter conditions on Sunday, getting second places on handicap. The Divaris Fireball was the winner overall in this fleet, with Dudley Isaac in second place, Olivier in third.

George Lakes Yacht Club wishes to extend it‘s grateful thanks to its sponsors – Raubenheimers Attorneys and Lew Geffen Sothebys International Realty (George), as well as to the many volunteers who ensured that the event went of smoothly.