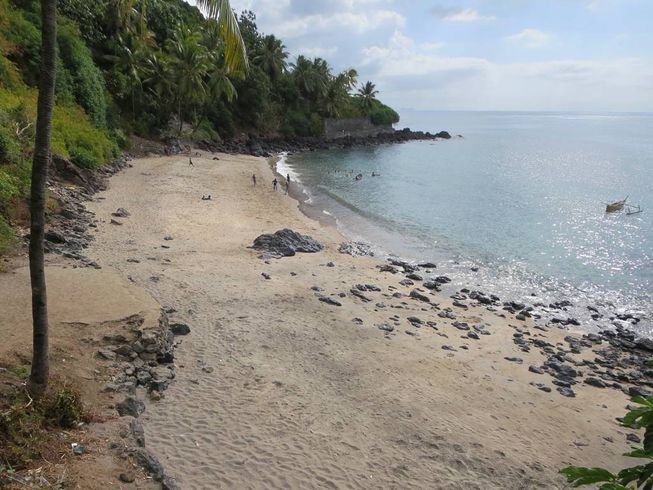 A beach on Anjouan, the island with ‘impossible’ rocks.
Photo by David Stanley/Flickr

There’s no way these types of rocks could have formed there.

There exists a remote tropical island between mainland Africa and Madagascar where one of the greatest geological mysteries in history is unfolding.

Anjouan is an autonomous high island formed by undersea volcanoes 4 million years ago, known for its steep, mountainous terrain and black sand beaches. Due to its volcanic origins, the island should be uniformly composed of basalt, a lava-derived rock — and it mostly is, with one peculiar exception.

Littered across the island are lighter-coloured sedimentary rocks that have no business being found on a volcanic landmass that emerged from depths of the sea. These rocks, identified as quartzite, are a converted form of sandstone, which can’t come from volcanoes.

“This is contrary to plate tectonics,” said geochemist Cornelia Class from Columbia University in a press release. “Quartzite bodies do not belong on volcanic islands.”

Class and a team of researchers recently travelled to Anjouan to conduct a full-scale investigation into these misplaced rocks. They haven’t quite solved the mystery yet, but they do have a theory, thanks to a bread crumb-like trail of quartzite that researchers followed high up the island’s mountainous terrain. It was there they found the motherlode: a massive mound of quartzite wedged into the side of the mountain. “It’s almost half a mountain,” Class told LiveScience.

The theory, if proven true, could make Anjouan one of the most unique geological wonders on the planet.

Class believes that Anjouan’s quartzite could be a remnant chunk of the ancient supercontinent of Gondwana. As that supercontinent split apart some 165 million to 130 million years ago, Class argues that a mountain-sized nugget may have crashed into the ocean basin that came to form in the rift between Madagascar and mainland Africa.

The rock would have sat at the bottom of the ocean for well over 100 million years until the great volcanic eruption that spawned Anjouan raised it back up, exposing this lost part of an ancient continent once again.

It’s an exciting theory, as thrilling a geological drama as can be, but of course more research will have to be done to test it. Until then, we can dream. Anjouan might be the only volcanic island in the world where you can pick up and hold an ancient chunk of Gondwana in your hand.

“This is what nature presents, sometimes,” explained Class. “It’s something we consider impossible, but then we find it, and once we find it, we have to explain it.”