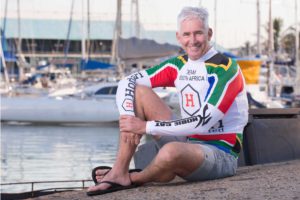 Quietly unassuming, Point Yacht Club’s Garth Loudon, like fine wine is just getting better with age as he heads off to the Netherlands and then on to Germany to compete against the world’s best Hobie Sailors.

His first stop is on the west coast of the Netherlands, in Noordwijk aan Zee, together with a handful of other South African Hobie sailors are competing in the Hobie Multiworlds and Europeans 2017.

Realistically, Loudon is Durban’s best chance of a medal, racing on a Hobie 14 in the Hobie Multiworlds. He is joined by Durban sailors Peter Hall, Dylan Albert; Jethro Brophy-Tintinger and father and son sailors James and Justin Butler.

Loudon’s sailing career spans four decades having first competed in the 1984 Hobie 16 Worlds at Fort Walton, Florida in the USA. He has had a hugely successful resurgent sailing season raking in the titles both locally and nationally. His best achievements in a decorated international career are sixth in both the 1993 and 1996 Hobie 16 Worlds, a first in the Tanzacat 2016 and a first in the European Grand Masters 2016.

Following on from the Hobie Multiworlds, Loudon heads to Germany where he, together with his long-time sailing partner Robbie Edouard-Betsy, take on the crème-de-la-crème at the ‘Olympics of Hobie sailing’ the Hobie World Cat, an invitation only event taking place in the surf of Sylt, an island off the north of Germany.

Only eight teams have been invited to participate at Slyt, the teams are selected by ProSail Events in Germany according to their national ranking and results in World and Continental Championships. Back to defend their title flying the Danish flag are brothers Daniel and Nicolaj Bjornholt Chrstensen. There are six fresh, new teams from the 2016 regatta.

Loudon said, “The selected teams race on branded Hobie 16s with each of our national flags featured on the sails. The regatta entails six days of spectacular racing directly in front of the main Sylt beach with thousands of holiday makers watching. It is an exclusive regatta where only the current world’s best Hobie sailors partake. All the races have live commentary, so certainly something different for Robbie and myself but we are certainly looking forward to it!”

This is the first time Loudon and Edouard-Betsy have been invited to the prestigious Hobie World Cat event, “I have competed in many world Championships over my 43 years of sailing. My best achievements were 6th place finishes in two consecutive World Champs. On the 16s, Robbie and I have been sailing together for much of my career, so we know each other well and are hoping to do South Africa proud.”

“It is going to be hard, fast racing in a small, highly competitive fleet where we will need to get a good start and keep our nose out in the front! Six days of racing in the North Sea can be very harsh and our sailing skills and endurance are certainly going to be tested at this high level.”

Talking about sailing on Sylt waters, Loudon stated, “Racing often takes place in the surf line near the beach which makes racing very exciting and spectacular. The racing is going be very physical, especially if the wind and seas get up and of course, the younger sailors have the age advantage. But we have been working hard on our physical fitness, Robbie is very fit having recently completed his 29th Comrades marathon. And I am getting a strong work out this week racing against some big names in Noordwijk.”

Having lost out by the narrowest of margins to Blaine Dodds in the recent Hobie 14 Nationals in Durban last month, where both sailors ended on the exact same number of points, with the decision resting on their last race, “But for now, my aim is to stay ahead of Blaine and Peter. A podium finish would be fantastic, but the reality is anything can happen and we still have a lot of racing to do here. Nothing is ever guaranteed.”

Other RSA sailors competing are: