As the sun sets on Durban, getting in some late afternoon training ahead of this weekend’s Flying Fifteen Nationals.
pic by Sophie Thompson

Two classes will be heading offshore to compete in the Flying Fifteen Nationals and Hobie 16 Provincials hosted by Point Yacht Club this weekend from the 16 – 18 December.

Defending champs in the modern fleet of Flying Fifteens are Patrick Harris and Jeremy Kriek who keep raking in the awards, they will be back on the water in the hopes of being crowned yet again. In the hunt to topple them off the top spot on the podium are international specialist 505 sailors, brothers Thomas and Peter Funke. Other names to look out for will be Myles White and his regular crew member, Estelle Buys, they will be keen to perform as they start to focus on the Flying Fifteen World Champs in Ireland.

Campbell Alexander, who competed in the Laser World Masters in Split, Croatia recently, will be pairing up with Dr Stephanie Brown from England. The Brit sailor who is out here for a week long holiday, will be relishing the warmer weather out at sea and making a trip up to the berg. Brown was awarded a special seamanship award at the Charles Stanley Direct Cowes Classic Week this July. She was crewing on a Flying Fifteen Fram Freyr, holding second position when she witnessed a nearby collision. Giving up her second place, she assisted the concussed sailor injured in the collision. The injured crew member later received 24 stitches in his head at hospital.

Joining them on the water will be respected and highly competitive Greg Hurter, Hurter was victorious four years ago. Well known for his stealth mode, he is keeping his crew name under wraps in the build up to the event. Anthony McMillan will be hoping for a repeat performance in the first running of the Jonsson Cup, where he pipped Olympic sailor Dave Hibberd on the line. Both him and Hibberd didn’t sail the correct course, but it was a fabulous tight finish and McMillan will be concentrating on the race course card this regatta. Similarly, to Hurter, McMillan is not revealing who is crew member is. Nhlanhla Phakathi and Craig Campbell, who featured on the Bashboard for the Bart’s Bash and are keen to feature on the steps of the podium.

A strong family contingent will be gracing the course sailing on the magnificent classics. Newcomers to the fleet, brother and sister team of Rudi and Hannah Fokkens. Also, fairly newcomers, Father and son team of Dominic and Marco Collett venture offshore for the first time, having gleaned their experience sailing in the bay. Another father and son team, that of Rob and Iain Bowman will be back on the water after their superb craft got t-boned and had to get a bit of reconstructive surgery. 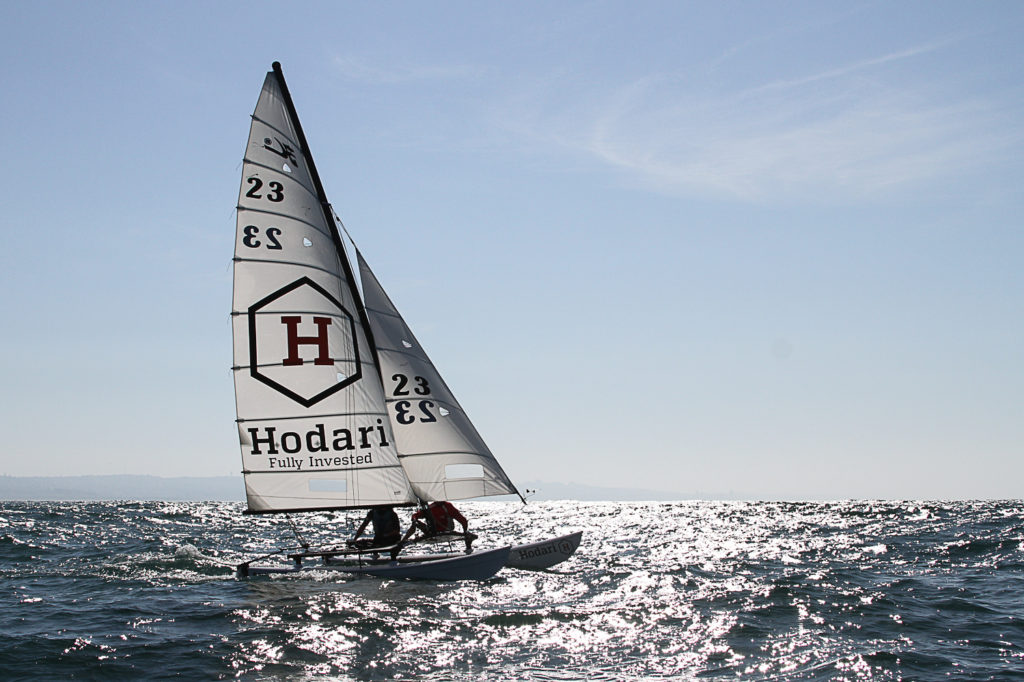 The Hobie 16 fleet is expected to have a number of hot shot sailors in town hoping to take to the water. Their challenge will be navigating the beachfront development currently taking place.

“The launching of the Hobies will be a bit of a challenge, but we are confident we will get the numbers on the water, and look forward to a colourful, fun-filled, competitive event.” Commodore for the Point Yacht Club, Greg de Beyer stated.

A number of big names will be taking to the water having competed internationally recently. Hoping to jet-propel his way to the front, Jethro Brophy-Tintinger has had a remarkable year, having competed in the Netherlands, topped the local log in the biggest sailing event in the world, Bart’s Bash and just touched down from being a part of the Volvo Round the World send-off down in Cape Town.

Joining him will be Garth Loudon with a young, new crew member. In the Durban off-season, Loudon represented SA at the Hobie Worlds. Loudon, together with Peter Hall took on the best of the best at the Hobie Multiworlds and Europeans 2017 held in the Netherlands. Hall will be sailing with his champ son, Matthew who has been turning heads in the Hobie 14 class.