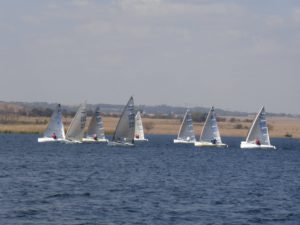 The weather is always unpredictable in August, but sailing conditions are usually good. This year a minor cold front was passing to the south of Pretoria, resulting in a stiff and gusty northerly berg wind on Saturday, which dissipated overnight and left behind a light and fluky north-westerly on Sunday.

Sixteen Finns took part in the regatta; a smaller turnout than usual, but it was a very competitive fleet. Only two ‘Classics’ were on the entry list this time; all the others were either new-generation or upgraded boats. The Finns completed four really good races on Saturday, but only two were possible on Sunday.

Nigel Trevarthen and Mike Smith very kindly volunteered to run the bridge, and they did an excellent job in quite difficult conditions. Franci Girdlestone was in charge of rescue, assisted by a number of enthusiastic volunteers.

On Saturday the wind was in the 12-16 knot range, with frequent heavier gusts, some of which were in excess of 20 knots. The wind strength generally favoured the heavyweight sailors, but the wind direction and the geometry of the dam kept the beats short and the chop minimal, allowing the lighter sailors to be reasonably competitive.

The 505’s had requested some good spinnaker reaches, and as a result the Finns were treated to some unusually long and exhilarating reaching legs. Unsurprisingly, Andreas Bohnsack enjoyed these conditions, and ran away with three first places and a third, while Tim Addison and Chris Moreton picked up most of the other top positions.

There was one notable exception; Richard Parker sailed almost flawlessly in the third race, and very nearly won it in his beautifully prepared Classic. Rob Mathot, Arend van Wamelen and Paul Thomson also sailed consistently well. It was a very good day of sailing, and an excellent start to the new season. After four races, Andreas was leading on six points, followed by Tim on nine and Chris on fourteen.

Sunday was completely different. It was a lovely sunny day, but the fluky nature of the wind resulted in a number of delays. Finn sailors become very sociable in these conditions, and the conversations on the water sounded rather like a get-together around a braai fire. Of course all that changes instantly when a warning signal is heard! In the fifth race, Rob Scott found a great shift way out on the left, and led from start to finish. He was followed by Jeremy Coutts, and then Tim and Chris. Andreas recorded a forgettable seventh place, although he was still leading the overall standings.

The sixth and final race was characterised by numerous position changes. Paul was first to arrive at the weather mark, with about six other boats just behind him. Some intense jockeying followed, at the end of which Andreas found himself in the lead. Then, right in front of the whole fleet, he demonstrated a ‘Florida Roll Tack’, which unfortunately involves falling in the water. He recovered rather well from this manoeuvre, losing only one or two places, and on the final beat he was still in line to win the regatta. During this beat Tim attempted to force him towards the right, which seemed to be the unfavoured side; however it did not remain unfavoured for long enough, and the two boats approached the finish line in second and fourth places. At the last moment, fate struck a final blow when Richard managed to nip across the line just inches ahead of Andreas, and by doing so he stole the vital fourth place. In the final tally Tim won the regatta by a single point; a tie would have gone in Andreas’s favour. This is the third time in the last couple of seasons that Andreas has lost a PSC regatta by a point or less; it was really bad luck for a very competent sailor!

Chris finished in third place, with Jeremy and Richard in fourth and fifth. Rob Scott, in eighth place, was the first ‘Legend’, followed by Gerd Bohnsack in tenth place. Gerd has recently graduated into the ‘Super Legend’ category (over 80), and is a unique character who is welcomed everywhere (even in Barbados). He will never stop sailing; he is quite literally a Legend!