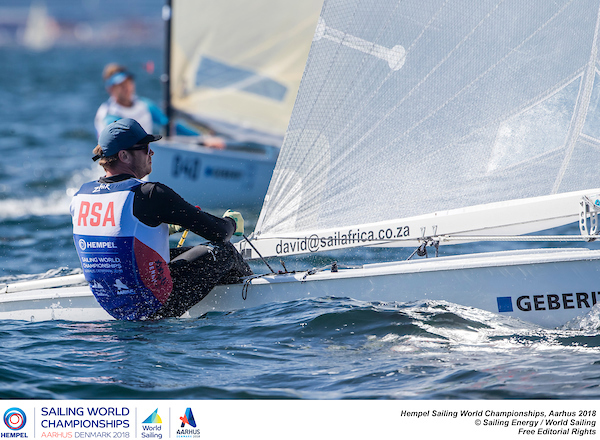 Dave Shilton of South Africa has moved up 2 places on the overall leader board.
Pic by Jesus Renedo/sailing Energy/aarhus 2018

Only a handful of Finn sailors managed anything approaching consistency yesterday on the fifth day of the 2018 Finn Gold Cup at the Hempel Sailing World Championships 2018 in Aarhus, Denmark.

Scoring a second from last and then a second place, European champion Ed Wright took a seven-point lead at the top after two more races on Tuesday.

With racing lost on Monday, three races were scheduled for Tuesday, however delay followed delay as the day got hotter and hotter. Finally one race was sailed under a blazing hot sun in very light winds before a further delay and a second race in 10-12 knots. The race course was a minefield of holes and shifts that caught out almost everyone at some stage. After the second race finished at 17h30 the fleet was sent home, after being afloat for more than six hours.

For Day 5 the fleet was split into gold and silver groups, with the gold fleet starting 10 minutes ahead of the silver on the same windward-leeward course.

South African Finn sailor Dave Shilton moved up the leader board 2 places yesterday with pleasing finishes of 4 & 17 to be 58th overall.

The fleet will now use the second reserve day (today) with two more races scheduled. This will also decide the medal race line-up for Thursday.