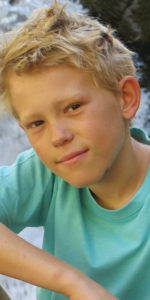 Matt Ashwell (13) learnt to sail at Milnerton Aquatic Club when he was nine. His talent immediately came to the fore, so naturally he advanced in the sport very quickly.

During the Youth Nationals at Theewaters in December he won the Optimist title for the second consecutive year. This was no easy feat as he scored two UNFs. Fortunately he received redress on one of those – and went on to win convincingly.

He is a very humble young man with amazing talent, and will go far in the sport, of that there is no doubt. He is very intelligent and even at his young age confident enough to present a speech to a room full of adults with consummate ease. Interestingly enough he is a talented musician and plays the clarinet beautifully.

Last year he competed in the British Nationals at Largs in Scotland, in very extreme conditions, yet managed 32 out of 89.

He then competed in Optimist Africans in Luanda, Angola in October where he was placed second overall and the top South African.

There is no doubting this young man’s talent as he is someone we will hear more about in the years to come.