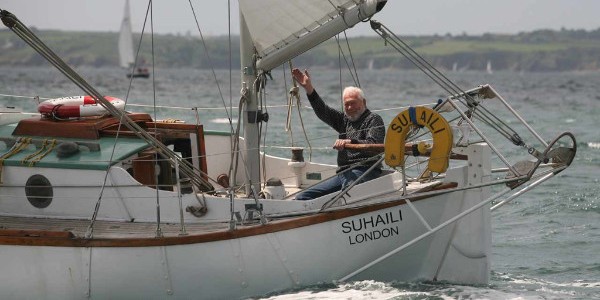 Sir Robin Knox-Johnston at the helm of his famous yacht SUHAILI after the start of the GGR SITRaN Challenge Race to Les Sables d’Olonne France.

Falmouth has celebrated the 50th anniversary of Sir Robin Knox-Johnston’s departure at the start of the 1968 Sunday Times Golden Globe Race.

Fifty years to the day after Sir Robin Knox-Johnston set out from Falmouth UK in his rugged 32ft yacht Suhaili to become the first man to sail solo non-stop around the Globe, the British master mariner returned to lead a celebratory parade of sail around the harbour.

Watched by visitors on every headland, the 200-strong armada of sail criss-crossed between Falmouth and St Mawes before Sir Robin set up a start line between Suhaili and Sir Francis Chichester’s equally famous yacht Gipsy Moth IV and fired the canon to set the 17-strong fleet of 2018 Golden Globe Race yachts on their way to Les Sables d’Olonne for the start of this 50th anniversary solo circumnavigation on Sunday 1 July 1.

The Suhaili Parade of Sail was the culmination of a 3-day festival involving Suhaili, Gipsy Moth IV, the replica fleet of Golden Globe Race yachts and vessels from around the UK and Europe which had gathered in Falmouth to honour Sir Robin Knox-Johnston’s achievement in the original Sunday Times Golden Globe Race back in 1968/69. 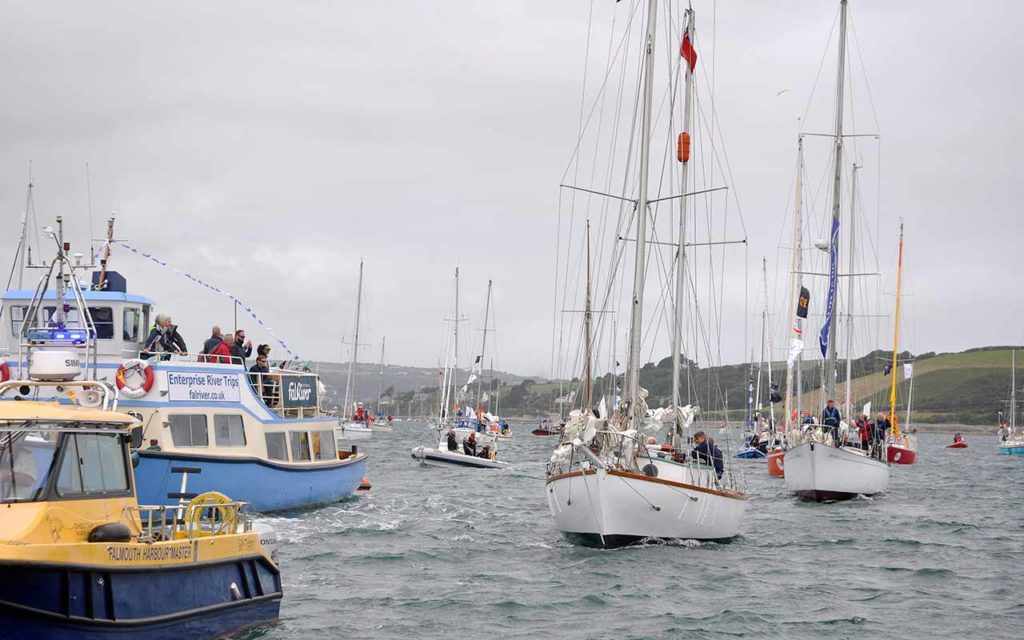 The Mayor of Falmouth, Cllr Grenville Chappell said: “It’s amazing to think it was 50 years ago – it seems only yesterday – that Falmouth welcomed Sir Robin Knox-Johnston back into port after his incredible and historic sailing achievement, one that captured the hearts and minds of millions of people around the world. His exploits then and subsequent, have inspired many across the UK and beyond to get out on the water, take up sailing or indeed undertake their own adventures. It certainly made an indelible mark on Falmouth’s community and we are thrilled to see Sir Robin and his legendary yacht Suhaili back in town. We’re delighted to be the host port for the Suhaili 50 Falmouth Parade of Sail jamboree. Our community has come together so well to assist, so a particular thank you to Falmouth Town Council, Falmouth BID, Falmouth Harbour Commissioners, Royal Cornwall Yacht Club, St Mawes Sailing Club and St Austell Brewery for their support.” 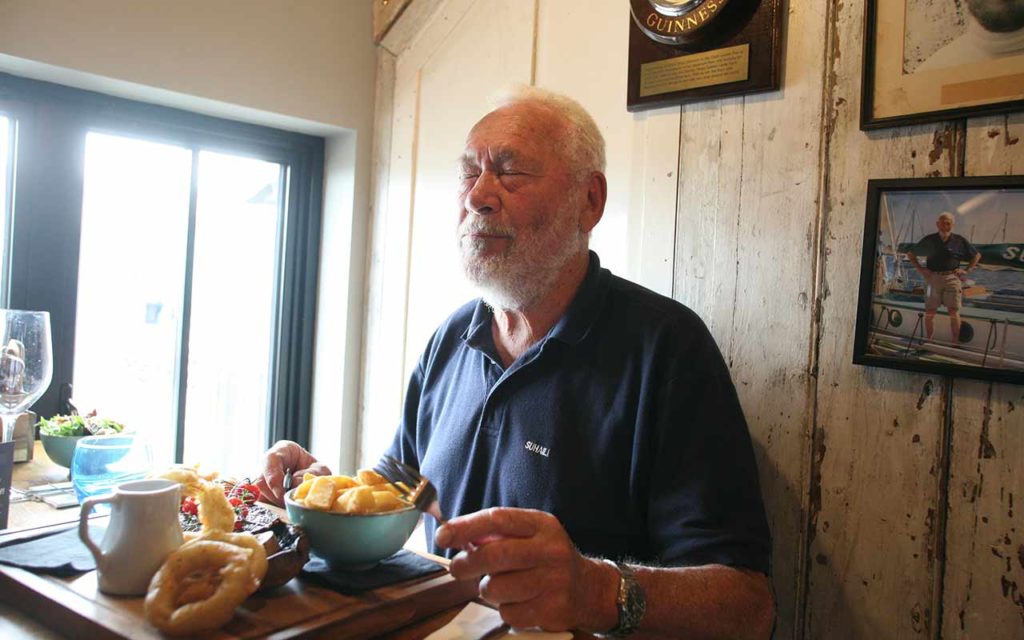 A Golden Moment… Sir Robin Knox-Johnston resampling his first meal of steak and chips served at the Chain Locker Pub Falmouth 50 years before, with the Guinness barometer mounted on the wall behind.

Sir Robin Knox-Johnston said: “It is wonderful to be back in Falmouth and to receive such a warm welcome. Everyone has been very kind. This week’s celebrations have brought back so many memories.”

One of those memories is of a barometer, ‘borrowed’ off a pub wall before Sir Robin set out on his solo first which he used to monitor the changing weather conditions during his 312 day voyage. The original was later stolen from his yacht, but Sir Robin returned with a replica of that faithful ‘A Lovely day for a Guinness’ branded barometer to present to the Chain Locker Pub where he stayed 50 years ago before his departure and on his return.

And to mark his return to this famous harbour-side hostelry, staff served Sir Robin with the same meal of steak and chips followed by lemon meringue pie he had ordered when he first returned to Falmouth on 22nd April 1969.