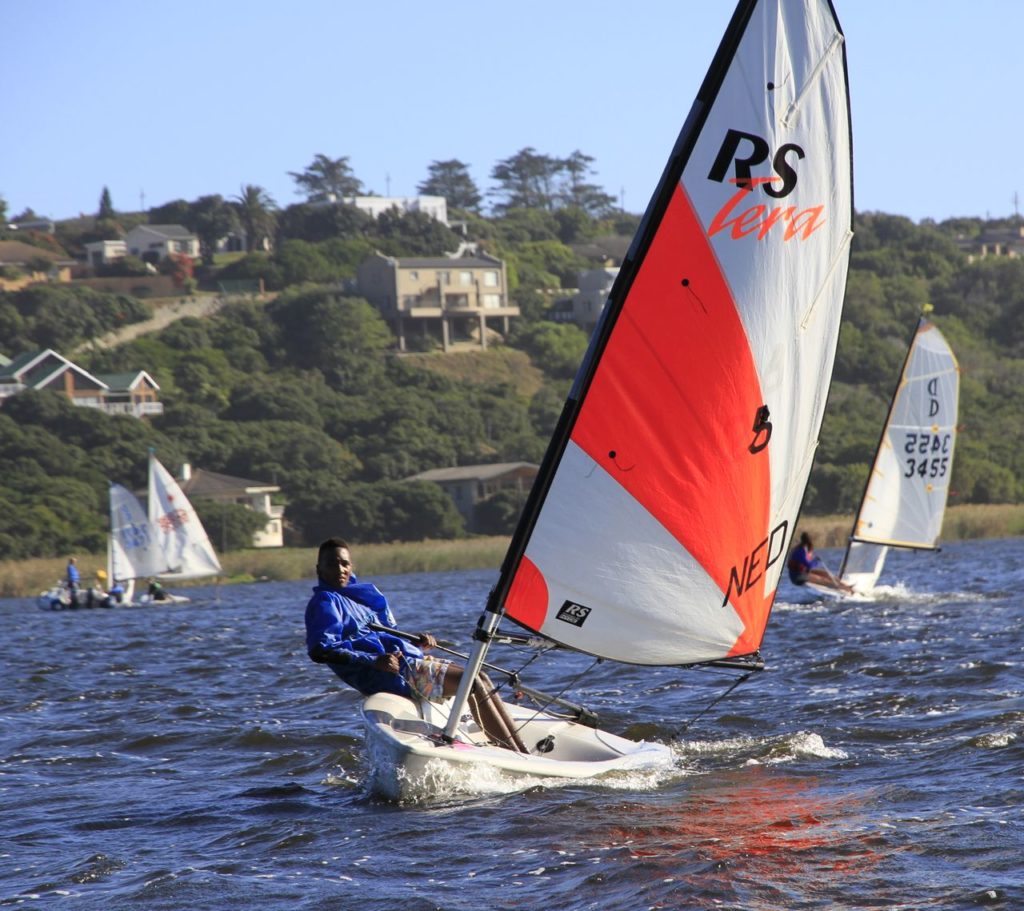 Thimna Mzola of Hillcrest Secondary in control in the breeze on Saturday.
pic by Peter Adrian

On Saturday, a moderate south-easter was blowing, providing excellent sailing conditions for the more experienced, but the novices in both fleets found the going difficult and had to retire to shore. 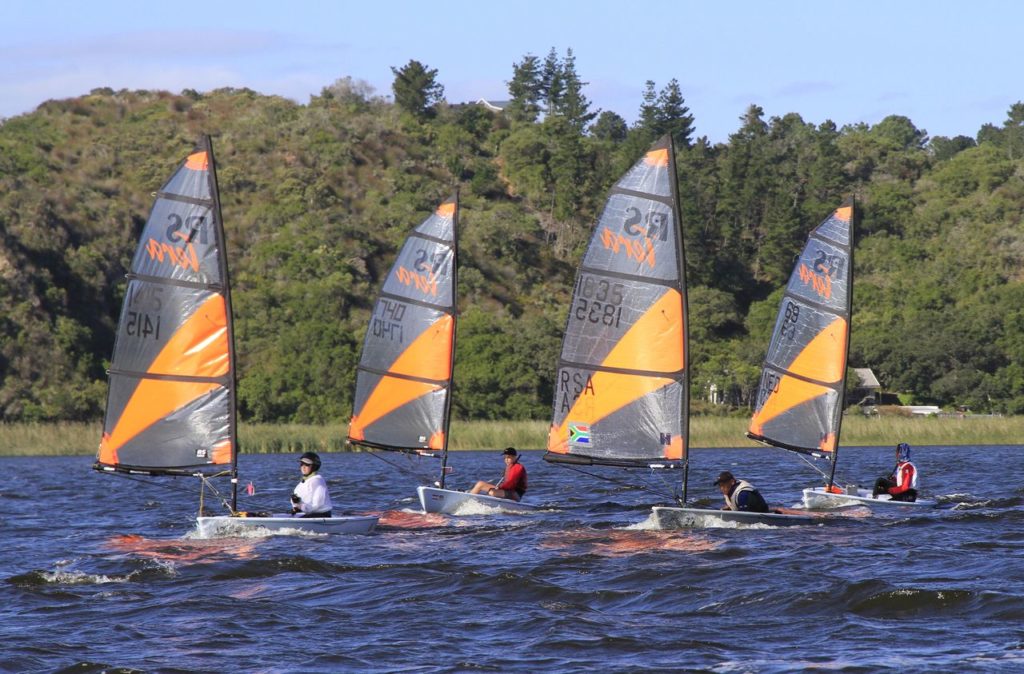 Dinghies of the High Schools fleet soon after the start of a race on Saturday, with the Topper of Waydon Goliath sailing for Sao Bras High (r).
pic by Peter Adrian 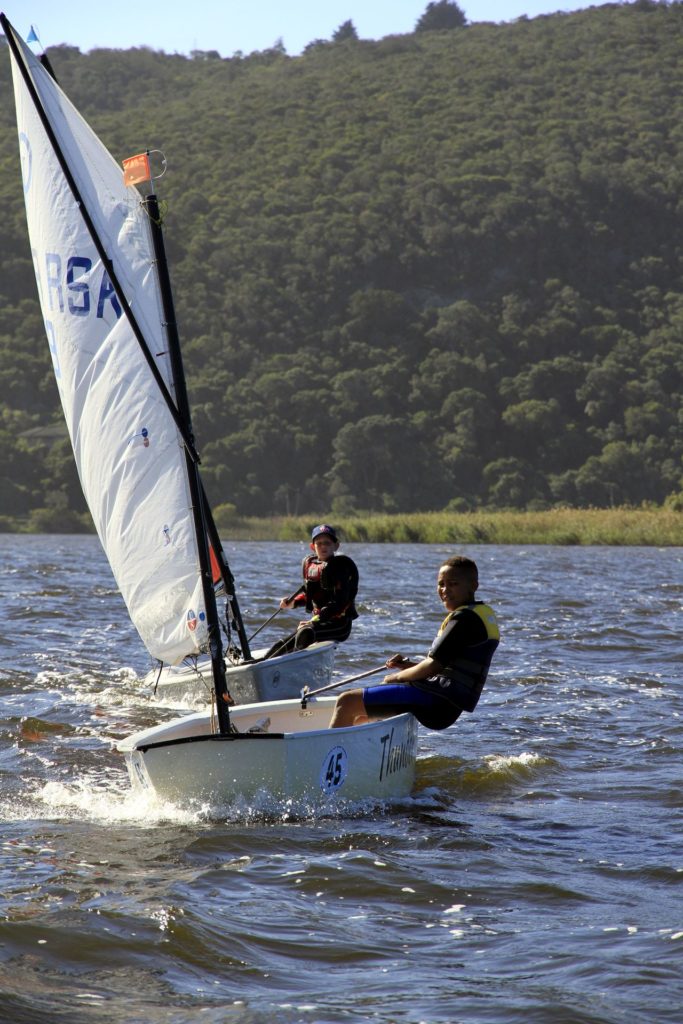 Jean Paul Buys of Outeniqua Primary was the overall winner in the Primary Schools fleet.
pic by Peter Adrian

In the High Schools fleet, Conrad Holm of Glenwood House College was in the lead, ahead of York High’s Matthew de Villiers and Robyn Hellstrom. With results being scored on Portsmouth handicap, in both fleets faster boats were well ahead, but the leading boats on handicap in both fleets were Optimists.

On Sunday, the wind failed to make much of an appearance. Only one slow race in a very light southerly breeze could be completed. In this race, the winner in the High Schools fleet was Sean Vonk ( Glenwood House College) from Ashley Layland (Point High). In the Primary Schools fleet, Aydin Gething (Oakhill) was the winner, from Tristan Boshoff and JP Buys, 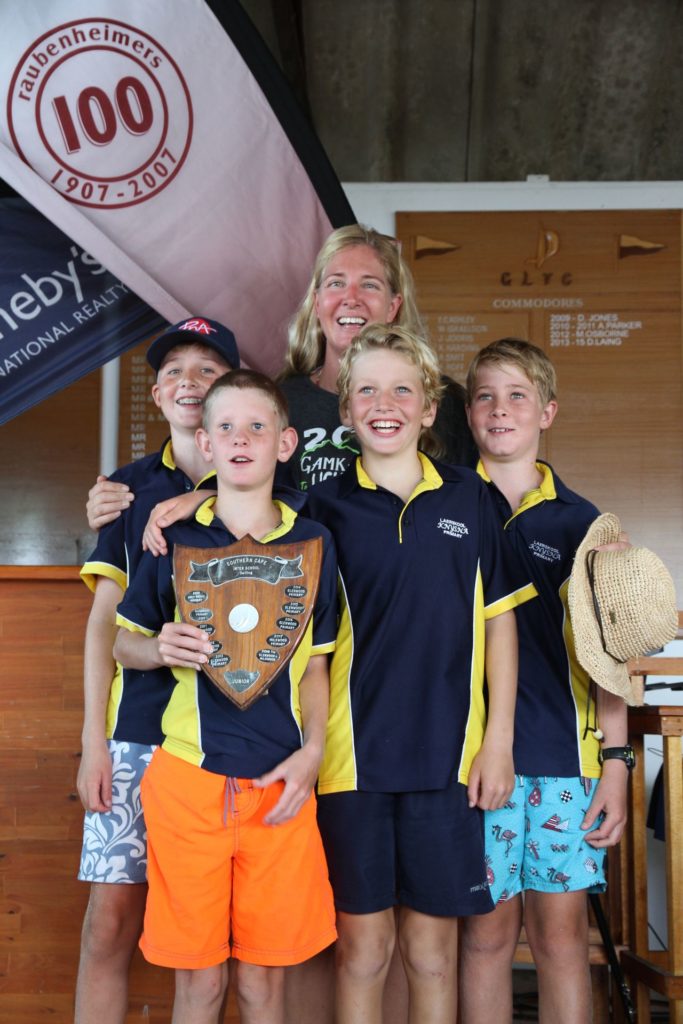 For the High Schools fleet, the individual winner was Conrad Holm, sailing for Glenwood House College on his Optimist. Matthew de Villiers on a Dabchick was second and Robyn Hellstrom on a Laser Radial was third (both York High). 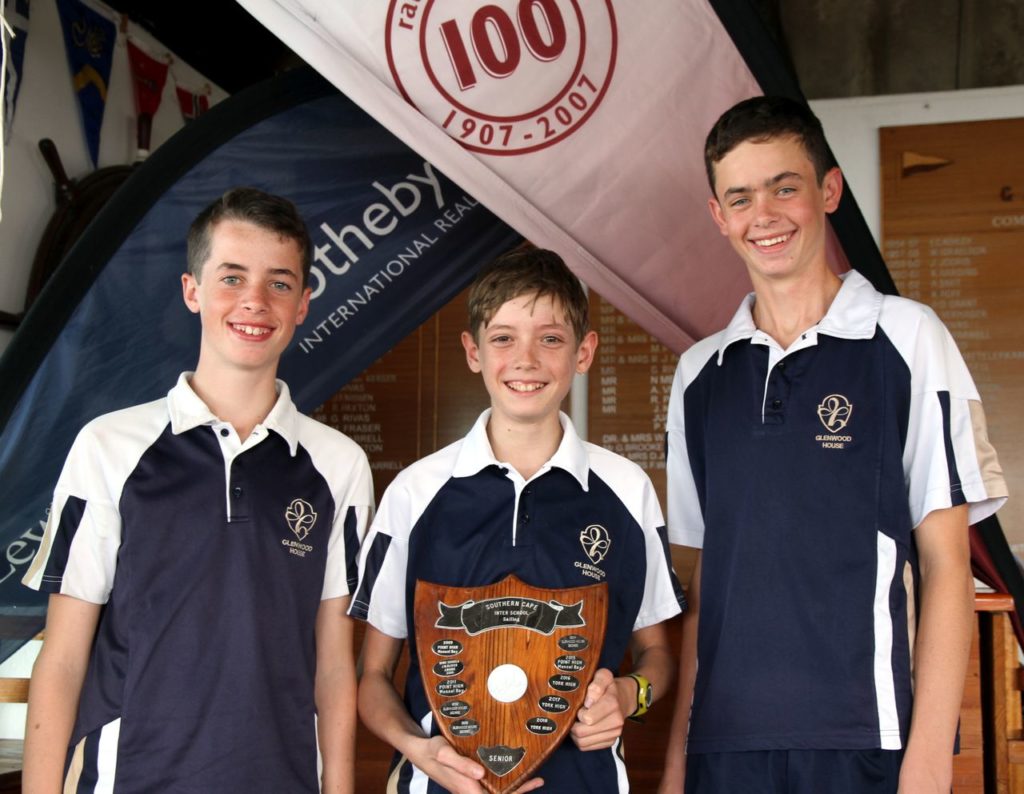 The inter-schools team scoring was done on the basis of the top three per school. On this basis, the team from Glenwood House College were the winners of the 2019 Eden District Inter Schools Regatta (High School fleet). They were represented by Conrad Holm, James Vonk and Sean Vonk. They narrowly defeated the title holder, York High, who had Matthew de Villiers, Robyn Hellstrom and Jordyn Soldin as their top three. In third place was Point High of Mossel Bay.

The Primary School fleet winner was Knysna Primary, who had Ryan Steenkamp, Luca Lutolf and Tyrin Williams as their top three in their team. Second in this division was Glenwood House Primary, represented by Tristan Boshoff, Mark Franklin and Clara Adrian. Third Primary School was Pacaltsdorp Primary.

S.A. Sailing Eden District and George Lakes Yacht Club gratefully acknowledges the sponsorship by Sothebys International Realty (George) and Raubenheimers Attorneys for their contribution to the success of the event. Sponsorship for prizes was received from the Lego Foundation, Victoria Inn Surf Camp and Sanguine Wellness.