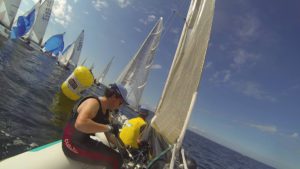 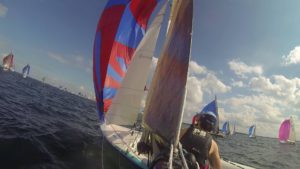 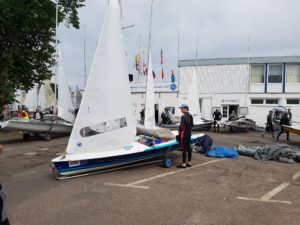 So today, Day 3 of the 505 European Championships in Warnemuende, the wind forecast looked good. We started launching at 10h30 to get to the racing area before the start at 12h00.

On the way out as we rounded the pier a cold, steady 16-20 knots greeted us, just our wind! The first race was started in overcast conditions, but every now and then we had a bit of sunshine. We had a good start at speed with space above and below us and managed to keep our lane clear above us, but the boat below us was fast and soon climbed up in front of us giving us dirty air. We tacked off, ducked a few boats and managed to get to the top mark in the top 30, but the wind was getting lighter all the time and we chose to go straight downwind.

At the bottom mark-rounding our spinnaker halyard got tangled, so dousing had to be combined with rounding the mark which is never a good combination. The second beat became a juggling act between haunched trapezing or sitting in the boat as the wind was getting much lighter. A tricky situation at the last gate rounding before the finish saw us having to let an inside overlapped boat past just before the finish and we ended up in 44th position – not so good.

Then the long wait started as the wind turned around in circles and gradually died completely.

Eventually at about 16h00 a new breeze started and the 4th race could be started in light wind of about 6-8 knots.

Shortly after the start we decided to cut our losses and tack, ducking what looked like most of the fleet, but as we moved to the right things started looking more favourable and we were on the starboard layline to the mark, with not too many boats ahead of us. The runs were hard work, trying to keep the spinnaker flying in the light stuff. We seemed to catch up a few places on the runs, but a difficult mark rounding at the last mark had 4 or 5 boats sail over us on the reach to the finish, and we finished 39th.

We came off the water at 18h45 and packed up the boat while sipping our ‘Rostocker’ before making our way to the Party at the Warnemuende beach tent. This was a grand affair with a real spread of food to write home about, salmon, prawns, smoked eel, roll mops, as well as a good selection of pork, chicken steaks and lamb chops, and some delicious potato bake, closely followed by a big choice of deserts. There was lots of chatting and making plans for future events and sailing holidays, before we viewed the sunset for the last time and walked back to our flat for a well deserved rest.

Howie Hamlin/Jeff Nelson won the first race with the Bojsen Moller brothers 2nd and the German pair of Stefan Boehm/Gerald Roos won the 2nd race with many of the top teams finishing in the 20’s, 30’s and even 40’s…, hey that’s behind us! So all was not as bad as it seemed.

And the Bojsen Moller brothers, both older than 60. are winning this event at the moment…comfortably!