Cruising. Pirates of the ‘Gariepbean’ 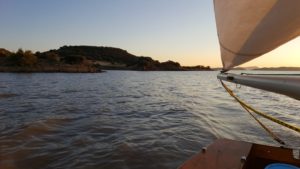 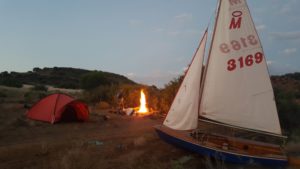 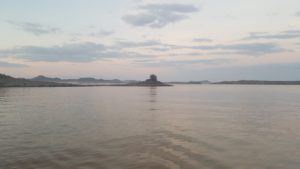 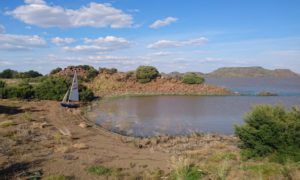 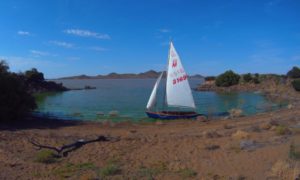 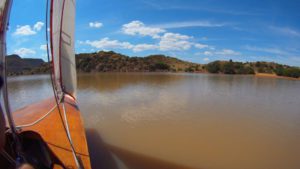 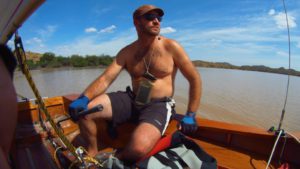 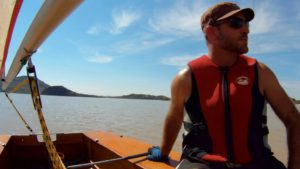 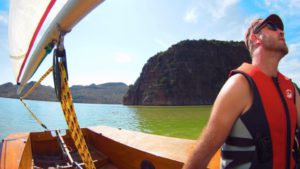 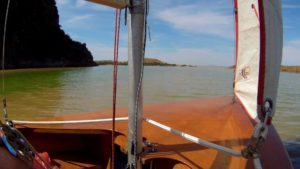 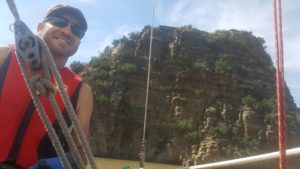 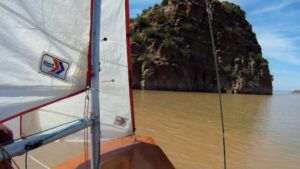 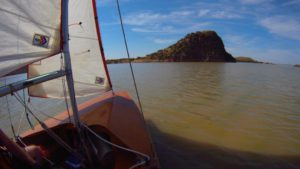 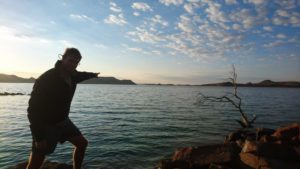 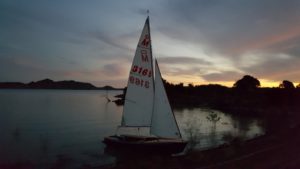 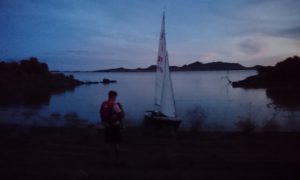 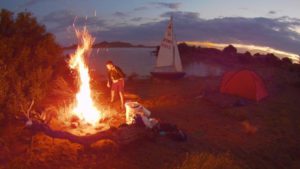 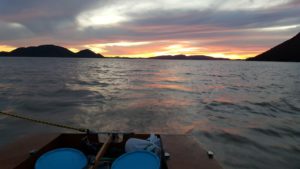 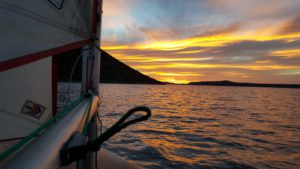 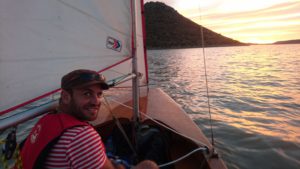 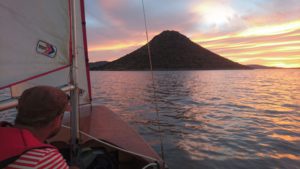 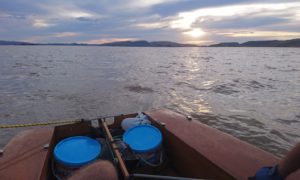 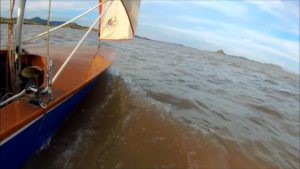 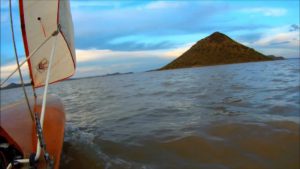 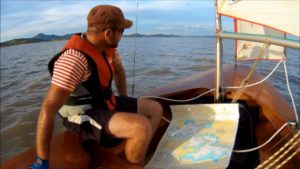 Dinghies, especially old wooden ones, represent the epitome of “simply messing about in boats”. The tinkering becomes part of the journey, no longer just a means to an end. The never-ending restoration turns into a relationship of “I take care of you, you take care of me”. Or so they say!

I have only just become the new owner of a 1980s vintage plywood Miracle sailing dinghy and had yet to use a piece of sandpaper on her in anger. **Jins was still in a fair sailing condition when I bought her, but she had seen better days. After every outing on the Swartkops River, my local sailing grounds, a new weakness would show itself. As much as I wanted to get her all fixed up first, I realised that the season was changing. I only had a small window left to go and fulfil one of my sailing dreams – a dinghy cruise on the Gariep Dam.

The idea had occurred to me only about a month earlier, but it was a long time in the making.

For years I have scoured the web for videos, photo’s and trip reports of adventures and voyages in small boats. I have read with envy how a hopscotch of mostly open boats would hit the Intracoastal Waterway in Florida every year and cruise for days on end, camping on a new piece of deserted beach every night, and talk boat-stuff around a campfire.

Unforeseen circumstances forced me to pull out of the Round-the-Island-Race on the Vaal Dam at the last minute at the beginning of February. I had promised my brother, who was supposed to crew for me during the race, that I would make it up to him.

A year earlier, February 2016 to be exact, SAILING Magazine featured a short article on Gariep Dam. No photos or stories, just a miniaturised image of the navigation charts and a brief description of sailing conditions. What really got me was the reference to all the evocatively named bays and most importantly – islands! What more do you need to get your inner pirate groping for his map and compass than the prospect of distant islands to explore!

Things were coming together nicely. I had a keen if inexperienced crew and now we had a boat with enough packing space for some camping gear. We had a venue that screamed potential, but of which we knew almost nothing. Fortunately a fellow Redhouse sailor, Peter Senn, used to own and sail a Dehler 34 on Gariep for many years, and he knew the dam well. He was ready with advice and kindly donated a neatly laminated Navigation Chart to the cause. So the real planning could begin.

Armed with fresh cheese buns from the local supermarket and a weather forecast, we shoved off from a gravelly shore at the Free State Yacht Club on April Fool’s Day with the sun already sitting low.

Packing the boat had been a tedious affair, with lots of rearranging and cross-packing between the limited waterproof containers to ensure a sensible weight distribution while still leaving useful space to move around. Packing small turned out to be even more difficult than packing light. Satisfied with the water quality after a make-shift filtration test, we also left half our clean water supplies back on shore to reduce the load.

The wind was blowing North West, as it does almost every day in summer from about 10h00. This meant an easy run from the harbour towards an island called Sonop in the East. Our departure came after the wind had already peaked earlier in the afternoon and it was gradually winding down towards sunset. Advisors from every corner including the Navigation Chart had warned of the violent gusts that accompany summer squalls. But the rainy season was pretty much over and had left the surroundings green and the dam level within a meter of completely full. The wind was steady and the boat chuckled and gurgled like only a light plywood hull can, keeping pace with what little swell was running. It was a tremendous relief to finally be on the water.

As the dam wall got smaller and the island bigger, the sky slowly turned orange and the wind started to peter out. Sonop is a large conical mount in the middle of Main Dam, 600m in diameter and towering more than 110m above the water where it meets the surface with its steep rocky shores. Just to the East of it lies Xmas Island (or Goodland, depending on the chart you use), an altogether more boat-friendly place. We passed north of Sonop to inspect a small bay on the Northwest corner of Xmas Island and then used the last of the remaining wind and daylight to sneak through the gap between the islands. Rocky ridges stretch out from the islands southern shore, forming natural breakwaters. With the first stars already out, we ghosted through a gap between two of these ridges, barely 20m across, and into a perfect little cove with a welcoming sandy beach.

It wasn’t long before meat was sizzling over driftwood coals. Yes, even the braai-grid made it onto the boat.

During the night a gentle wind had picked up, again from the South-East. We made an early start, hoping to do as much exploring as possible and still be back in our little cove before the afternoon’s North-Westerly got too strong. We had hoped for the predicted light Northerly wind for a nice reach to Porcupine Passage, but the South-Easterly persisted, and it turned into a long, slow beat to windward. Porcupine Passage is a very narrow section of the dam where the old river had cut a deep gorge through rocky mountain ridges. It is flanked by the aptly named ‘Zimbabwe Ruins’ stacked rock structures in the West, and the large Wildvang Island in the East. Standing guard over the passage like a sentinel is an impressive buttress called Eagles Crag with its towering cliff face climbing straight out of the water. Fluky winds ushered us through into Fluffy bay where we bobbed on a glassy surface over lunch.

Cat’s-paws started coming through the passage from the North as the wind finally shifted. We weaved between the smaller passage islands and the treacherous Porcupine rocks which were just breaking the surface. It was easy to see how a boat can come to grief on these rocks – the suspended silt throughout the dam makes the water utterly opaque and it is impossible to see any submerged obstructions.

We had one last look around the beautiful anchorage called Pam’s Bay and then started our beat back to Xmas Island in a rapidly freshening North-Westerly.

The wind had a good few kilometres fetch over the water toward where we were. A steep chop had quickly built up and some of the crests were starting to break. The sailing was exhilarating and the Miracle with her voluminous pram bow rode over the waves like a much larger boat.

I still do not know exactly what happened, but the one moment we were luffing up in a gust and the next we were swimming, boat on its side and inverting fast. We must have sailed into a strong thermal or vortex coming off the large island Sonop to windward. A wild veering in the gust and even further increase in speed had caught us with the jib a-back and we went over in a confusion of flailing arms and sheets.

We managed to right the boat without trouble and it drifted sedately while we scrambled back on board and bailed the cockpit. It was my first capsize in the Miracle, and I was happy to see how little water she had scooped in as she rolled upright. Despite the hull turning turtle, we only lost a water-bottle and one shoe, a small sacrifice for our initiation.

We nursed the dinghy back into our little cove where we watched from its protection as the whitecaps spread across the water. Nervous laughter punctuated the conversation as the adrenalin slowly wore off, each of us clutching a strong cup of coffee. We waited for the afternoon sun and warm wind to dry out our soggy gear and soggy selves.

As the wind eased and our confidence returned towards evening, we set sail once more to explore more of the island’s shore. Just off its eastern shore lies a mooring buoy in an open bay called Pirate’s Creek. It is well protected against the North-Westerlies, but seems very exposed to a South-East wind. Just to the south lies another, much smaller bay enclosed between parallel rocky ridges which form submerged reefs that extend quite far offshore. Ask my centreboard how I know that! (Side note: In retrospect, another feature of Google Earth of particular usefulness in planning is the ability to scroll through different imagery dates, showing the dam at varying levels. The shallow bays drain and a new shoreline takes shape. This exposes detailed reefs and rocks that can be noted on a chart for future navigation when the dam is at full capacity.)

It was another early start, this time with the sun behind us as we slowly made our way West on the final leg back towards the harbour, combining our efforts with a single paddle and a little help from a very light air out of the South-West.
This voyage has left me feeling deeply satisfied, but at the same time also wanting more. It is great to check it off the bucket-list, but our particular combination of boat, route and wind conditions was just one of umpteen possibilities, each with its own rewards and challenges.

There are a lot of things about the boat and our preparation that we could have been done better, some of which I knew well in advance, and others that we only discovered as we went along. One thing we did absolutely perfect though was using what we had and doing it anyway.