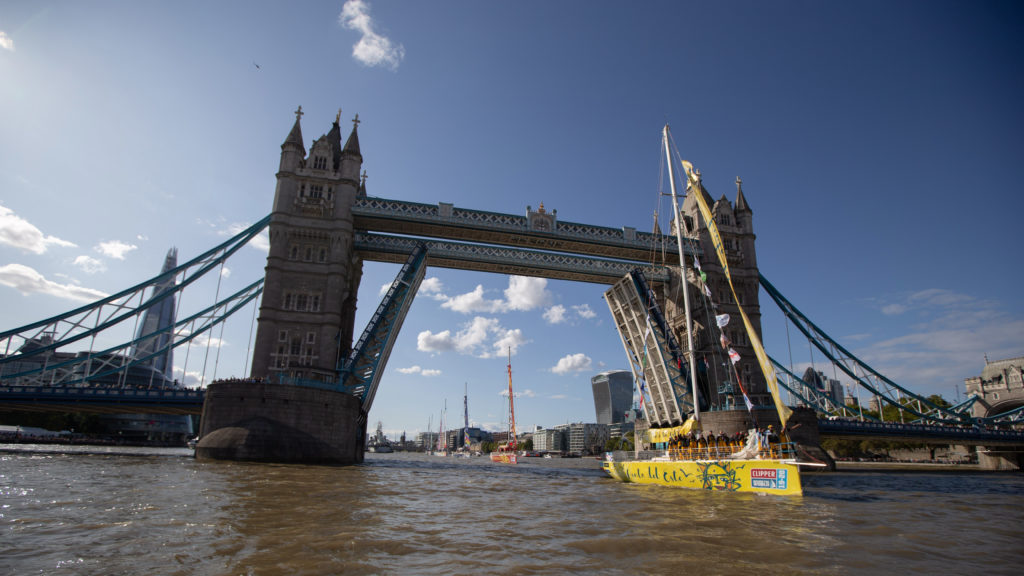 Some 220 ordinary people from all walks of life, representing 29 different nationalities, departed from St. Katharine Docks, London, in front of thousands of spectators, to embark on the twelfth edition of the epic 40,000 nautical mile global sailing challenge, the Clipper Round the World Yacht Race.

The Clipper Race is unique in that it trains everyday people to sail around the world. And 40 percent of participants have no sailing experience before signing up for the four weeks of intensive training needed to take part. In this edition, there are over 350 different occupations including doctors, farmers, teachers, retirees and a safari leader.

After leaving London on Sunday afternoon, the race will officially began from the Thames Estuary on Monday. The first race is to the Algarve town of Portimão, Portugal, then the teams will race for thirty days to Punta del Este, Uruguay.

Legendary sailor and Clipper Race Chairman, Sir Robin Knox-Johnston, who was there to see the fleet off, said: “The Clipper Race is for anyone wanting to do something extraordinary with their lives. By the end of this challenge, you see crew standing tall, their self-confidence having grown, knowing they’ve done something very special with their lives.”

Sir Robin, the first person to sail solo, non-stop, around the planet, 50 years ago, founded the race to allow anyone, regardless of experience, the chance to share his passion for ocean racing. He added: “Why paint your life in pastel shades? Paint it in bright colours and enjoy every moment of it!” 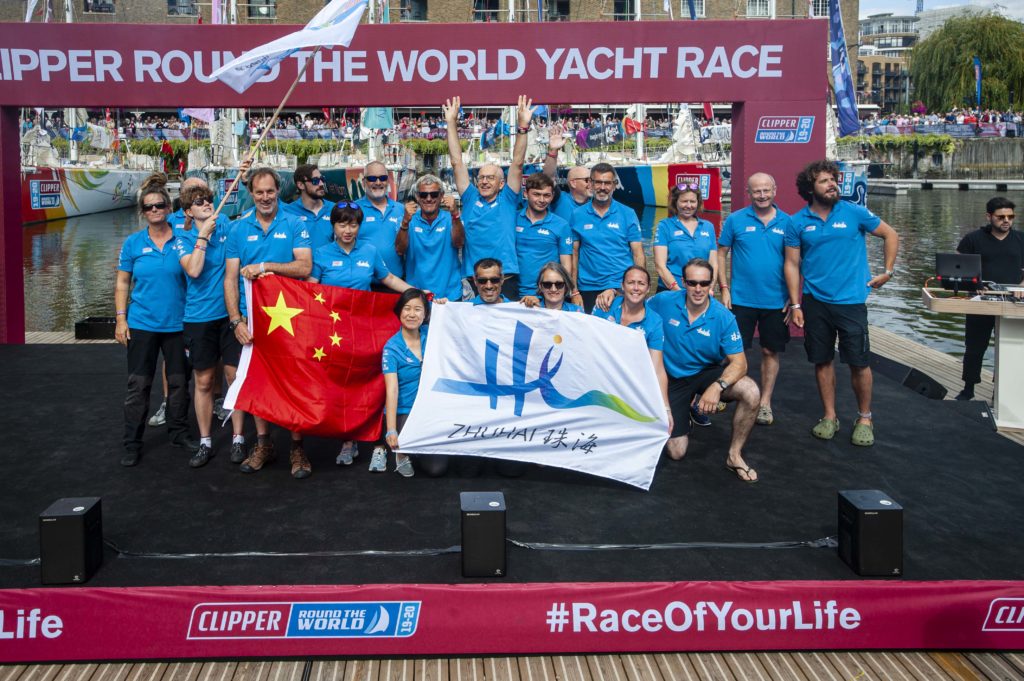 The crew of Zhuhai, skippered by South African Nick Leggatt, prior to boarding for the race.
Pic by Jason Bye

Nearly 700 non-professional crew will take on Mother Nature in this ultimate ocean challenge. 43 different nationalities are represented, making it the most international edition to date. The race will see crew from Tanzania, Nigeria, Morocco, Martinique, Saudi Arabia, Slovakia and Egypt compete for the first time.

Timothy Morgan a nineteen year old student from Northamptonshire, is sailing around the world on the Seattle team. He says: “The adventure, getting away from it all and doing something completely different from everyday life, is what attracted me to the Clipper Race. I’m taking a gap year from university and when I come back people tell me I will have a whole new outlook on life.

As he departed London, he said: “Now looking around us there are crowds, three or four people deep, all the way around. It’s an emotional day leaving everyone. I won’t see my parents for six months now, but I am excited to get started.”

The race is open to anyone aged 18 and over with no upper age limit, who has a thirst for adventure and a desire to challenge themselves. The oldest competitor to date is 76, a figure matched during this edition. Each crew is led by a professional Skipper and First Mate.

Following their stopover in Portimão, Portugal, the teams will then head to Punta del Este, Uruguay, Cape Town, South Africa, Fremantle and the Whitsundays, Australia, Sanya, Zhuhai and Qingdao, China, Seattle, USA, Panama and New York, USA, Bermuda, before a final crossing of the Atlantic Ocean towards Derry-Londonderry, Northern Ireland.

The Clipper Race will return to London almost a year later for Race Finish on Saturday 8 August 2020, where one of the eleven teams will be awarded the illustrious Clipper Race trophy.