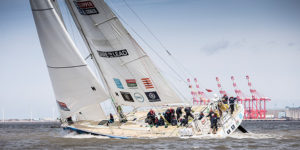 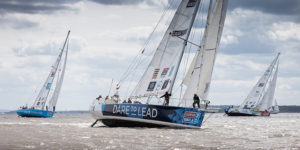 Light winds continue to challenge during the fourth day of racing, which have caused the fleet to condense by 20 nautical miles in the last 24 hours in the Bay of Biscay.

Andy Burns, Skipper of ‘GREAT Britain’, currently in sixth place, reports that the light weather conditions bring with them real lessons of light wind sailing which will be valuable later on in the race.

Andy reports: “The Doldrums have come early!!! Or so it feels without the heat.

“We have moved a grand total of about five nautical miles in the last three hours. It is, however, teaching the crew the importance of concentration even in light airs and the gains that can be made and gaps that can be opened.”

Nikki Henderson, Skipper of ‘Visit Seattle’, and her crew have been working hard to maintain third position “After a night of not much sleep whilst trying to keep the boat moving along even at one knot, I’m really hoping the wind gods blow in our favour soon!”

There are now just 72 nautical miles standing between ‘Unicef’, which is holding onto first place by two nautical miles, and twelfth placed ‘Greenings’ which maintain its westerly course.

Whilst the four leaders; ‘Unicef’, ‘Sanya Serenity Coast’, ‘Visit Seattle’ and ‘Dare to Lead’ have maintained their respective positions, ‘Qingdao’ has started to break away from the middle of the pack and currently sits just nine nautical miles behind fourth place.

Dale Smyth, Skipper of fourth placed ‘Dare To Lead’, comments: “The race is currently very tactical and barely able to keep the boat moving at times.

“All are well onboard and in good spirits. The competition keeps us on our toes all day and night”

‘Greenings’ has now completed exactly 7.1% of Leg 1, and although currently sitting in twelfth place, Skipper David Hartshorn is confident in his westerly routing tactic.

David explains: “I am very aware that there is a ridge of high pressure pushing east towards the Bay of Biscay, that is likely to develop into a wind hole preventing further positive direction south, so we are preparing to go west were we need to be.”

Looking ahead, teams are hoping for some increased windspeed and a smooth transition into the trades when they reach the Portuguese coast.

Gaetan Thomas, Skipper of sixth place ‘Garmin’, notes: “It is funny to see the fleet coming back together as the wind died from the front to the back, the lucky ones are the boat at the back I guess. In French, we call that the accordion effect. The first ones to get out of the hole will have a chance to fly away, maybe for good, until the equator.”