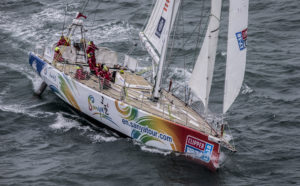 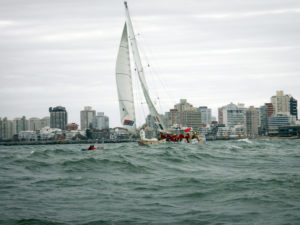 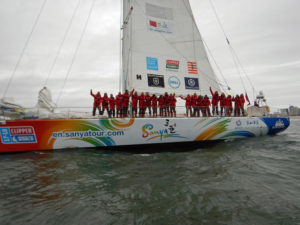 The winning lining the deck while savouring their moment of glory.

On her team’s achievement, Skipper Wendy Tuck, 52, from Sydney, Australia, said: “During the last big wind hole, which changed the leader board so much, I was pouring over the weather files for hours. I was pretty happy with my tactics, but when you get to the wind hole and the wind completely drops, even though you know it is coming, you always have nightmares about other boats moving ahead, but you have to stick with your convictions.

“The crew have developed by leaps and bounds. We have a mixture of those who had sailing experience before and they helped to coach those with less experience. We had so many different situations, it’s just amazing how far they have come on.”

This is the second consecutive Clipper Race for Wendy Tuck, a veteran of ten Rolex Sydney Hobart Yacht Races and the 2016 Jane Tate Memorial Trophy winner.

Wendy and her team also secured one bonus point during the race crossing the inaugural Scoring Gate in third position. However, the official winner of Race 1 is still to be confirmed as redress will be applied to two teams still competing.

The 6,400 nm route, which is the equivalent distance of ten Fastnet races, was eventful, including three medivac, and a varied mix of fickle winds in the Doldrums, challenging seas states, and champagne sailing conditions in the Trade Winds, which contributed to frequent changes on the leader board, and a closely fought battle amongst the fleet.

Nine further teams are expected to join Sanya Serenity Coast into port in the next 24 hours. They will be joined by Greenings and Nasdaq in the next few days to complete the twelve-strong fleet.

This is the first time the Clipper Race has visited Uruguay in its eleven-edition history. The teams will now enjoy a well-deserved break from the relentless conditions of ocean racing and will perform much needed maintenance on their yachts as well as enjoy local hospitality amidst the region’s stunning coastline location.

Clipper Race Chairman, Sir Robin Knox-Johnston, said: “This first stage of the Clipper 2017-18 Race is the longest ever individual race in our eleven editions. You never forget your first ocean crossing and this particular one has been a major achievement. 6,400 nautical miles through the Atlantic, from North to South, is a huge feat for any sailor, let alone our amateur crew. They have put themselves to the ultimate endurance test.”

Race 2 of the Clipper 2017-18 Race starts on 4 October, departing Punta del Este and heading back into the Southern Atlantic as teams take on the 3,560 nm mile journey to Cape Town, South Africa.