Clipper Race. Battle At the Top 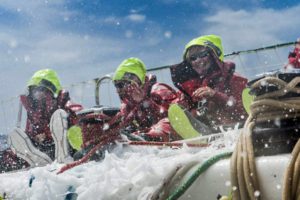 Two teams are fighting hard for the honour of taking first place in this leg to Cape Town, with the finish just days away.

Greenings has emerged from Stealth Mode in second place, with its time off the grid failing to maintain its leading position. Dare To Lead now maintain first place by three nautical miles. Both teams have completed the Elliot Brown Ocean Sprint, though the bonus points won’t be announced until the rest of the fleet crosses the eastern gate. Dare To Lead Skipper Dale Smyth isn’t too hopeful of collecting extra points, explaining: “In all honesty, between losing our Code 3 (heavyweight spinnaker) and some big gybe angles, there is a big chance that many will better our time.”

On a more positive note, the Capetonian adds: “We passed Greenwich Meridian last night so now I am really feeling on home turf being south and east!”

The second placed Greenings also experienced a less than ideal Elliot Brown Ocean Sprint. After noticing the boat was not performing as well as others in the fleet, the team used the onboard Garmin VIRB action cameras to discover kelp wrapped around the port rudder. Whilst every effort was made to clear the debris, Skipper Andy Woodruff says: “Unfortunately, there is still weed trapped between the hull and rudder join. Hopefully it may come out as we sail, but if not, it will impact our performance the rest of the race to Cape Town.

“But this is sailing and there is no sport so difficult with so many variables as yacht racing.”

The biggest threat facing both Dare to Lead and Greenings is Liverpool 2018. A day after jumping an impressive six places to be third on the leader board, Liverpool 2018 has elected to go into Stealth Mode. We will find out if this tactic pays off when the team returns to public view later today (Monday).

In Liverpool 2018’s absence, Garmin sits in third place, despite occupying top spot just 24 hours ago. The team is now around 23 nautical miles off the lead, and Skipper Gaëtan Thomas explains: “We had the spinnaker up and we were on sight of Greenings in the day, then unfortunately we lost them due to some effects making our boat kicking to port, which will be fixed in Cape Town.

“On a port tack, the boat couldn’t keep the pressure of the spinnaker because the result would be a broach and probably the end of a spinnaker. So, we lost some ground on Greenings and Dare To Lead, and probably other boats too, but I prefer to protect the boat and keep the big picture in my head of racing round of the world.”

Sanya Serenity Coast is back into fourth place in the standings, but is closely followed by Visit Seattle , who is less than seven nautical miles behind in fifth. Sanya Serenity Coast Skipper Wendy Tuck reports: “It’s now a matter of keeping the boat fast, heading in the correct direction. The race is not over yet by a long shot, as we have a large patch of light breeze to get through yet. We have two plans and will probably go with the third one.”

The large patch of light breeze Wendy is referring to is being caused by a ridge of high pressure coming up behind the easterly boats. Clipper Race Meteorologist Simon Rowell reports it will then rotate towards Cape Town, and could potentially strand much of the fleet in a wind hole just shy of the Finish Line.

Meanwhile, a battle is also brewing between Qingdao and Nasdaq, with just ten nautical miles separating the sixth and seventh placed teams.

HotelPlanner.com is a further nine nautical miles back in ninth. The team were kept busy overnight after being caught in a sudden squall while flying the Code 3 (heavyweight spinnaker). Skipper Conall Morrison comments: “We have some work to do, to make a small repair to the clew and get a Yankee sail on deck to keep HotelPlanner.com moving.”

Unicef remains in tenth, whilst PSP Logistics is in the midst of heavy winds, with gusts between 40 to 45 knots. The conditions should ease this morning, and provide a couple of days of good reaching conditions south of the high ahead of the next low.