Cassini has begun transmitting data – including the final images taken by its imaging cameras – in advance of its final plunge into Saturn on September 15. The spacecraft is in the process of emptying its onboard solid-state recorder of all science data, prior to reconfiguring for a near-real-time data relay during the final plunge.

NASA’s Cassini spacecraft is on final approach to Saturn, following confirmation by mission navigators that it is on course to dive into the planet’s atmosphere on Friday, September 15.

Cassini is ending its 13-year tour of the Saturn system with an intentional plunge into the planet to ensure Saturn’s moons – in particular Enceladus, with its subsurface ocean and 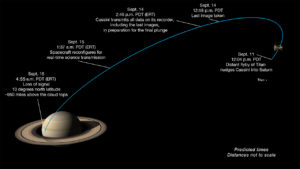 Milestones in Cassini’s final dive toward Saturn.
pic by NASA/JPL-Caltech 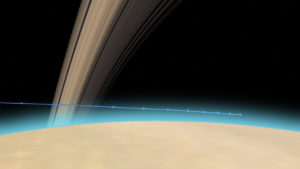 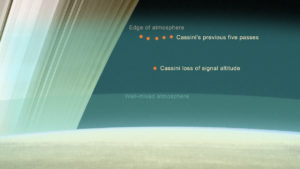 Graphic showing the relative altitudes of Cassini’s final five passes through Saturn’s upper atmosphere, compared to the depth it reaches upon loss of communication with Earth.
pic by NASA/JPL-Caltech

signs of hydrothermal activity – remain pristine for future exploration. The spacecraft’s fateful dive is the final beat in the mission’s Grand Finale, 22 weekly dives, which began in late April, through the gap between Saturn and its rings. No spacecraft has ever ventured so close to the planet before.

The mission’s final calculations predict loss of contact with the Cassini spacecraft will take place on Sept. 15 at 7:55 a.m. EDT (4:55 a.m. PDT). Cassini will enter Saturn’s atmosphere approximately one minute earlier, at an altitude of about 1,190 miles (1,915 kilometers) above the planet’s estimated cloud tops (the altitude where the air pressure is 1-bar, equivalent to sea level on Earth). During its dive into the atmosphere, the spacecraft’s speed will be approximately 70,000 miles (113,000 kilometers) per hour. The final plunge will take place on the day side of Saturn, near local noon, with the spacecraft entering the atmosphere around 10 degrees north latitude.

When Cassini first begins to encounter Saturn’s atmosphere, the spacecraft’s attitude control thrusters will begin firing in short bursts to work against the thin gas and keep Cassini’s saucer-shaped high-gain antenna pointed at Earth to relay the mission’s precious final data. As the atmosphere thickens, the thrusters will be forced to ramp up their activity, going from 10 percent of their capacity to 100 percent in the span of about a minute. Once they are firing at full capacity, the thrusters can do no more to keep Cassini stably pointed, and the spacecraft will begin to tumble.

When the antenna points just a few fractions of a degree away from Earth, communications will be severed permanently. The predicted altitude for loss of signal is approximately 930 miles (1,500 kilometers) above Saturn’s cloud tops. From that point, the spacecraft will begin to burn up like a meteor. Within about 30 seconds following loss of signal, the spacecraft will begin to come apart; within a couple of minutes, all remnants of the spacecraft are expected to be completely consumed in the atmosphere of Saturn.

Due to the travel time for radio signals from Saturn, which changes as both Earth and the ringed planet travel around the Sun, events currently take place there 83 minutes before they are observed on Earth.

“The spacecraft’s final signal will be like an echo. It will radiate across the solar system for nearly an hour and a half after Cassini itself has gone,” said Earl Maize, Cassini project manager at NASA’s Jet Propulsion Laboratory (JPL) in Pasadena, California. “Even though we’ll know that, at Saturn, Cassini has already met its fate, its mission isn’t truly over for us on Earth as long as we’re still receiving its signal.”

Cassini is set to make groundbreaking scientific observations of Saturn, using eight of its 12 science instruments. All of the mission’s magnetosphere and plasma science instruments, plus the spacecraft’s radio science system, and its infrared and ultraviolet spectrometers will collect data during the final plunge.

Chief among the observations being made as Cassini dives into Saturn are those of the Ion and Neutral Mass Spectrometer (INMS). The instrument will directly sample the composition and structure of the atmosphere, which cannot be done from orbit. The spacecraft will be oriented so that INMS is pointed in the direction of motion, to allow it the best possible access to oncoming atmospheric gases.

As Saturn looms ever larger, Cassini expects to take a last look around the Saturn system, snapping a few final images of the planet, features in its rings, and the moons Enceladus and Titan. The final set of views from Cassini’s imaging cameras is scheduled to be taken and transmitted to Earth on Thursday, September 14. The unprocessed images will be available at:
https