Cariad I. A Sweetheart Who’s Beautiful to Look at 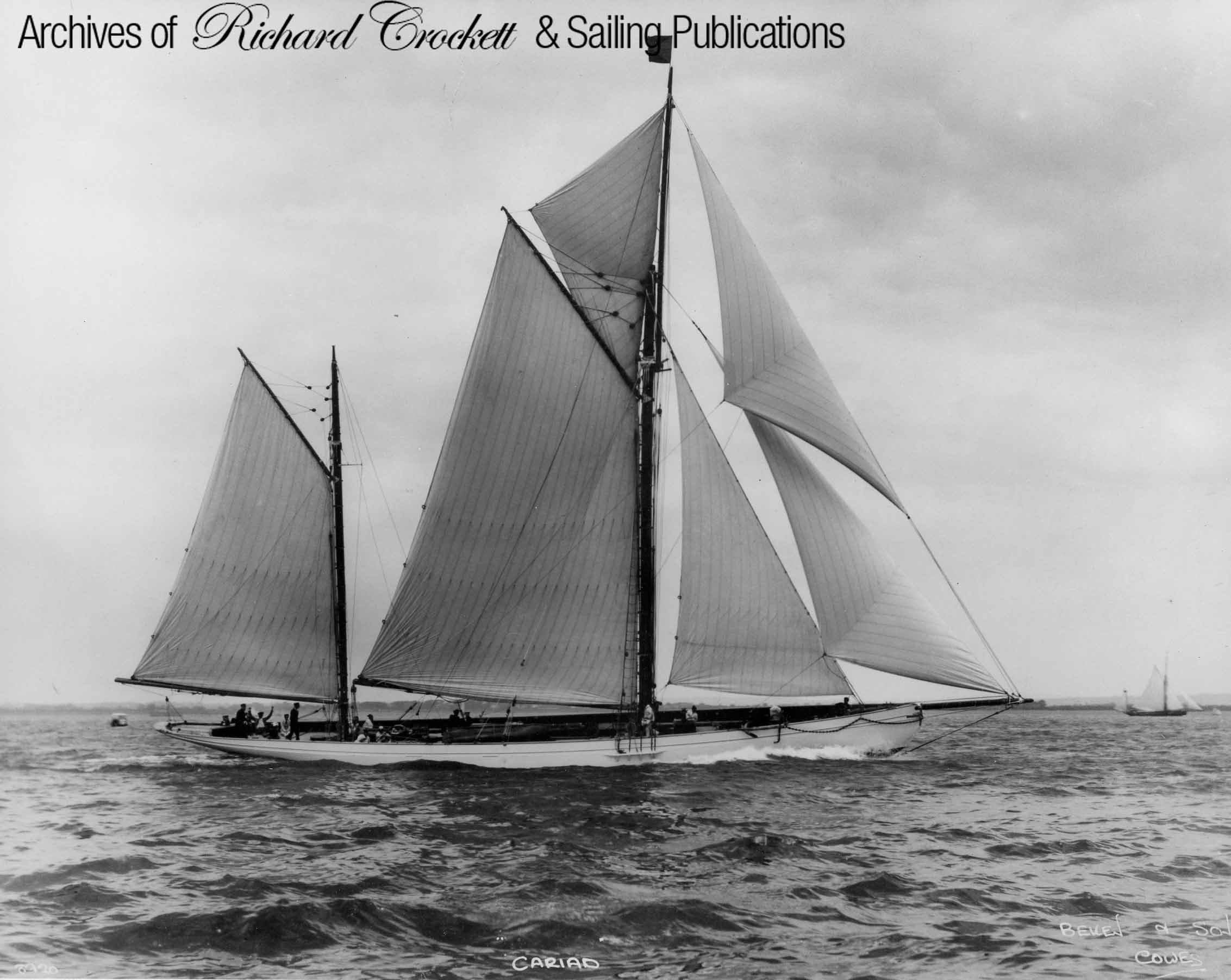 This pic by Beken of Cowes, was undoubtedly taken in the Solent.

While delving into SAILING’s archives recently I noticed a few pics of Cariad 1, which I always remember as the yacht which was refurbished in Durban for the 1971 Cape to Rio race, and whose name comes up on occasions when graceful yachts are mentioned.

These pics of her show a beautiful and graceful lady under sail, and sadly some of her in a desperate state of disrepair.

Below are a few highlights of her years under sail. 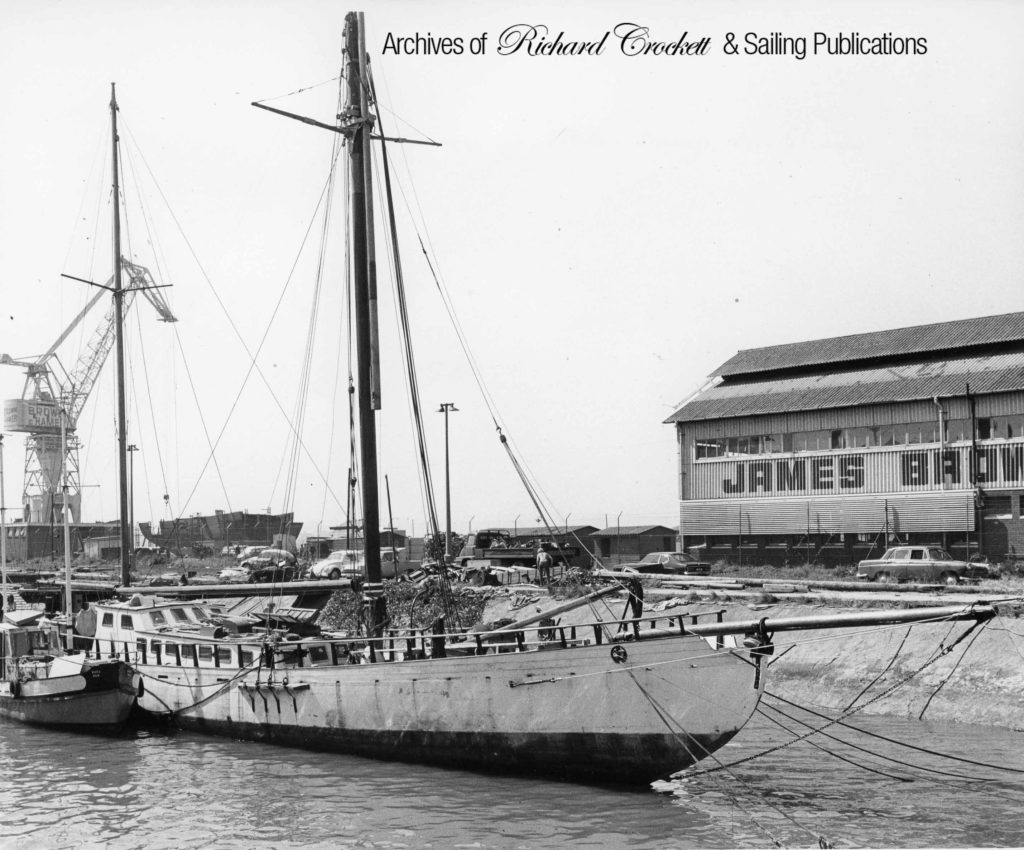 Not looking too good, but under restoration in Durban.

‘Cariad 1 was designed by A. E. Payne and built in 1896 by Summers & Payne of Southampton, England, for Lord Dunraven. She is reputed to be the oldest gaff ketch in the world today and with a length of 38.7 metres (118′) she is also the longest!

Plus, she is believed to be the most beautiful classic yacht in the world.

Which is why her name is so fitting – as ‘Cariad’ is the Welsh word for ‘sweetheart! 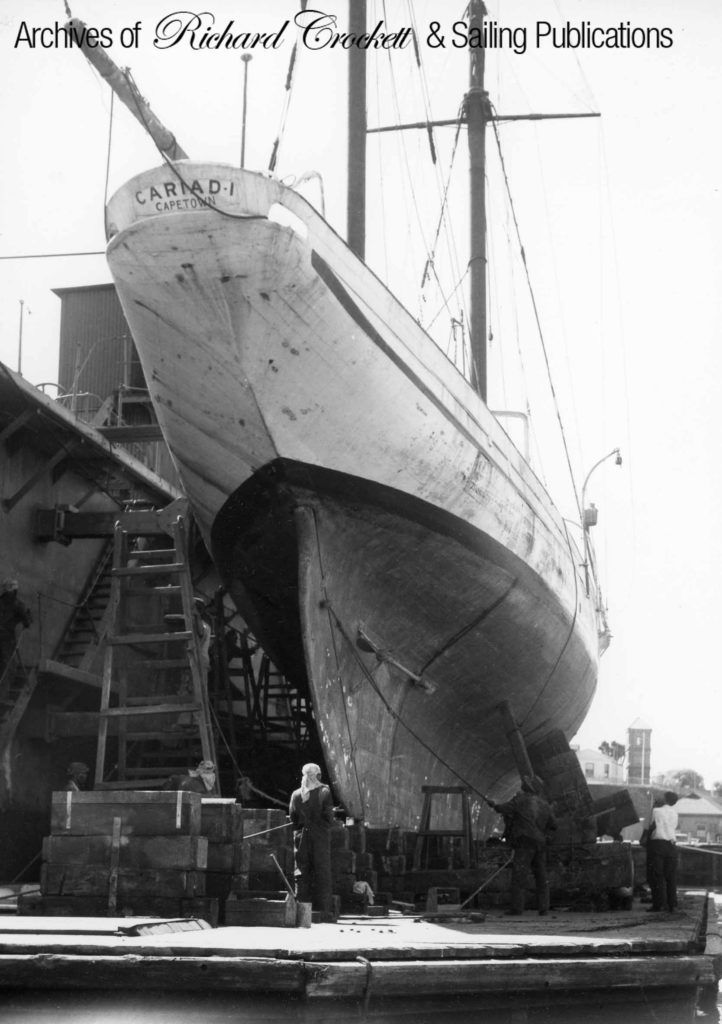 On the slipway in Cape Town before undergoing further restoration.

In 1898 she won the Vasco da Gama Cup, a race that celebrated the 400th anniversary of the Navigator’s voyage around the Cape of Good Hope to India. The race was of 10,000 nautical miles from Lisbon to Bombay. During her lifespan so far she has completed at least three circumnavigations, two under her South African owner Mr A.W. Flitton. 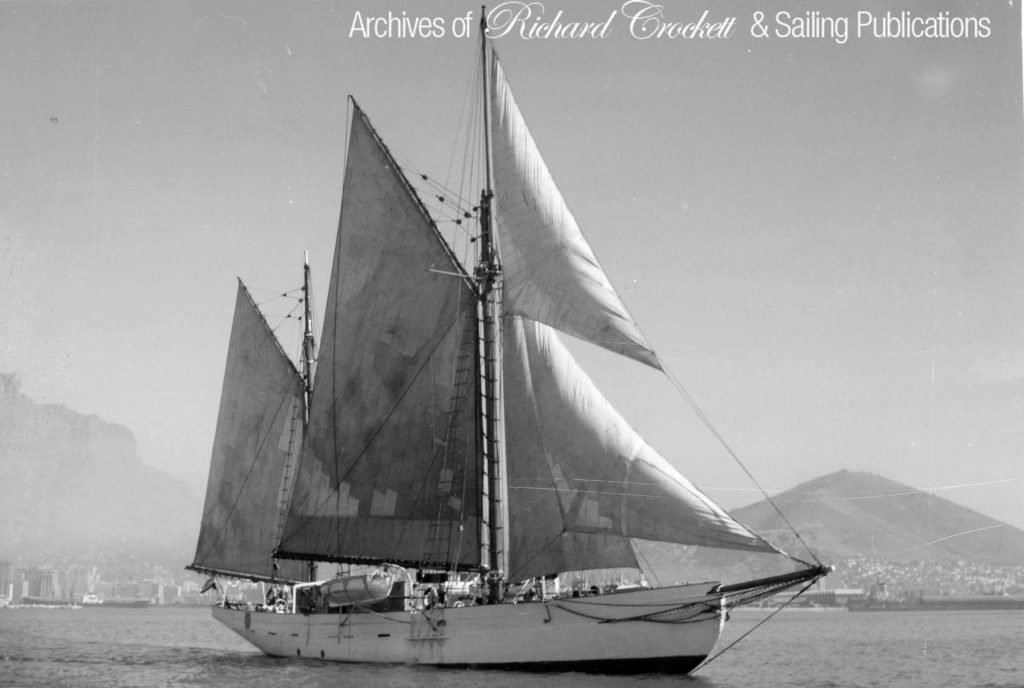 Another breathtaking pic of a gallant old lady taken off Cape Town.

Her name at one point had been changed to Fidra, and later in life she became Cariad I as a new Cariad II had been launched.

Her first circumnavigation under Flitton commenced on 9 November 1948, with just 6 crew, amongst whom was Joseph Mbayi, the cook, and probably South Africa’s first black yachtsman. 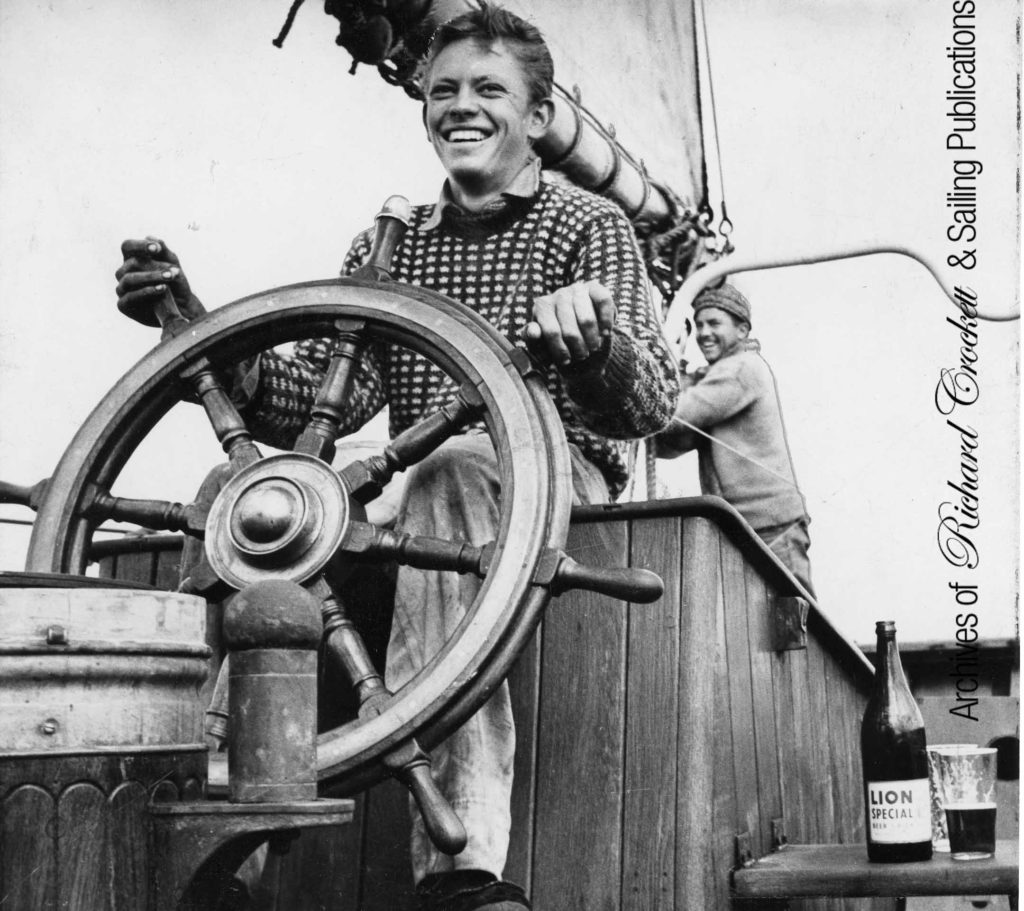 This could be Jan Lello? Life aboard Cariad I was good. Taken note of the beer brand!

On the first night of the 1971 Cape to Rio Race she was almost involved in a collision with a tanker which headed towards her on collision course but, secure in the knowledge that “power gives way to sail” especially on the open sea, Cariad 1 correctly continued on her own course. Instead of the expected alteration from the tanker there came five imperious blasts which mean “Get out of my way!” Barely avoiding a collision, the tanker finally altered course when Cariad 1 shone a powerful light on her sails’.

Cariad 1 has fallen into disrepair several times in her life, but always there has been someone who has fallen in love with her and restored her to her original glory.

Her most recent restoration was in Thailand, and today she is moored in Singapore, and looking beautiful.

Enjoy the pics of this beautiful lady. 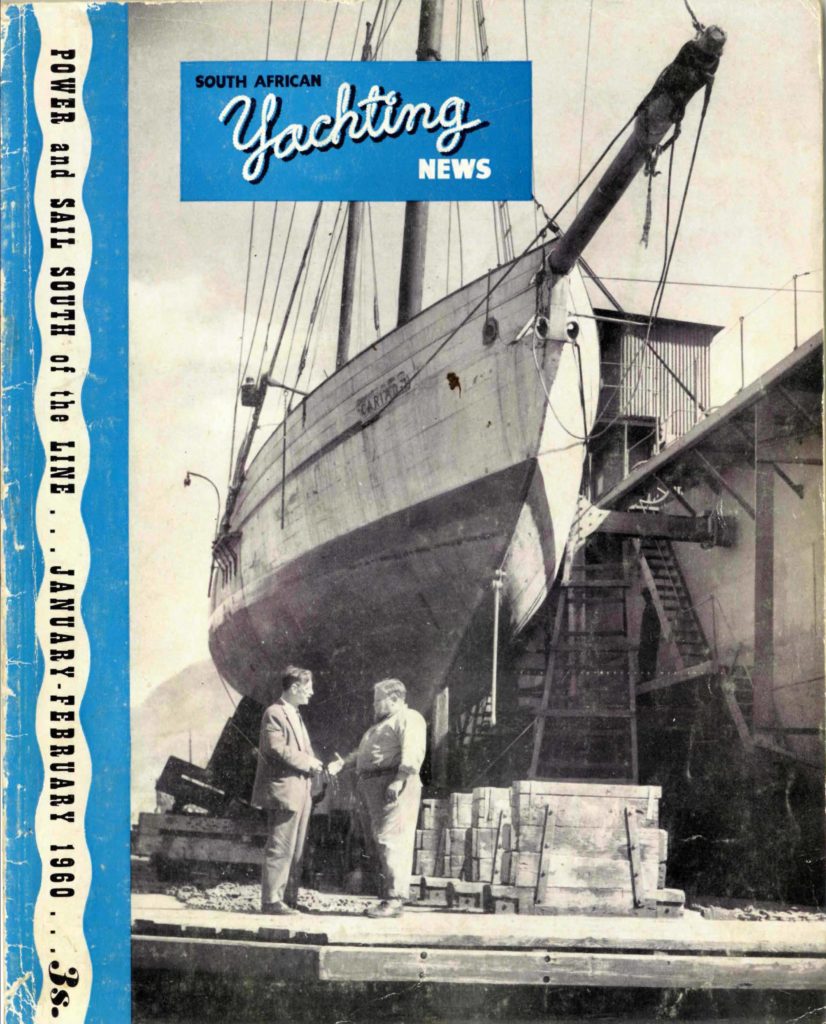 This cover pic was captioned as follows: New lease of life for the late A.W. Flitton’s historic 126-ton ketch Cariad I. Happy moment on the floating dock, Cape Town, as the new owner, John Hardman, right, congratulates yacht broker Frank Robb after a survey shows all is well with the hull. 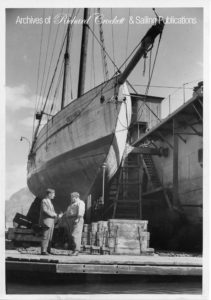 The original pic from which the cover was designed. 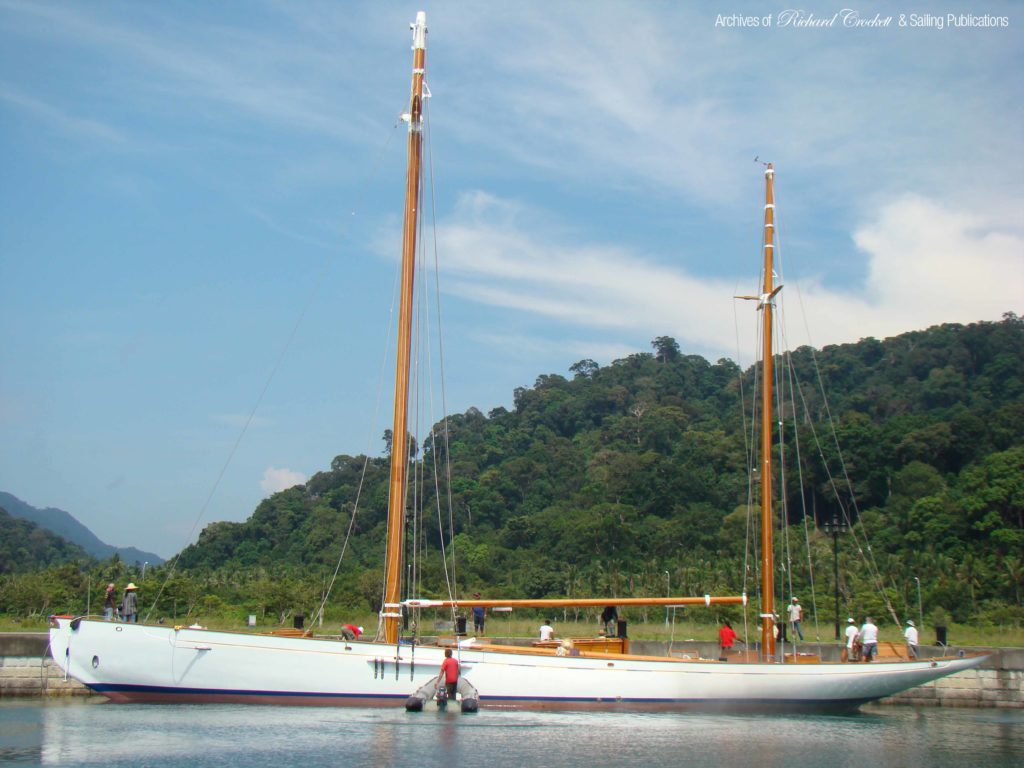 Fully restored and on her way to becoming someone’s sweetheart again!