The second discard came into play with the completion of the final race for the Cape 31 fleet in Cape Town Race Week 2019. And it’s likely to be a game changer for a boat like TnT, who are on fire today – and were fourth overall coming into the final day.

The start was all clear, and committee boat end favoured, with Scud lowest at about mid-line and above them, Nitro, Ski, Magic and TnT, with MB hugging the race committee boat.

The boats piled in towards the shore and then came up like a peloton behind the kelp-line on the long port tack.

Wow, these are champagne sailing conditions!

At the weather mark it was TnT leading ahead of Nitro and Magic, then MB, Scud and Ski.

The boats flew down the shore of the busy promenade creating an incredible spectacle and a great advert for the sport of sailing.

As the boats gybe off onto the port layline Scud and Ski were early and the only two to opt for a port rounding at the gate.

TnT exploded with pace downwind, while Magic pulled a rabbit out a hat to overtake Nitro who will need to turn on the afterburners in the last lap to salvage a podium position from MB in this regatta. Nitro came into today in second position overall.

At the ultimate weather mark rounding of the regatta, TnT opened a healthy lead, with Nitro breathing down Magic’s neck. Brothers-in-law Dave Rae (helming Nitro) and Roger Hudson (calling tactics on Malcolm Hall’s Magic) have it all to play for in this final leg.

The wind moved slightly north, so the boats needed to gybe off far earlier to avoid the shoreline. MB fell back dramatically on the beat having rounded at the gate with Nitro, and were under pressure from Scud who momentarily look to have passed them, before a slow gybe cost Scud the challenge. Ski close out the regatta with a cheerful message of thanks to the Committee boat, ably led by Race Officer Doug Alison.

What an action packed regatta!

With the fleet trimmed to six boats after the retirement of CuAl and Nemesis due to a collision in Race 7, the start line looks a bit barren now.

The weather leg was been extended to 1.5 miles for this race. The start was clean with Nitro on the pin, then TnT, Scud, Magic, MB, and Ski closest to the committee boat.

Scud was squeezed to weather on TnT and was forced to make a clearing tack behind Magic, MB and Ski. TnT were sailing high and fast, but when they, and Magic tacked, they had to duck MB and Nitro who was beginning to look strong. The fleet all tack onto port for the long beat up the coast to the

TnT was first to the weather mark, followed closely by Nitro, MB and Magic. Some way back, Scud was followed by Ski.

The front group hoisted cleanly for what was going to be a very interesting long starboard run. This leg is all about who can best work the angles and get the shifts and gusts right? Nitro and Magic both put early pressure on TnT before they both gybed offshore early. The rest hugged the back of the kelp line on the port lay line. Picking up kelp at this critical stage of the regatta would be a disappointing disaster!

Nitro took the port rounding at the gate and headed right offshore – a bold move as all the rest went left heading for Granger Bay.

Nitro took a hammering by going right, as the fleet began to separate. Scud put pressure on Nitro who had dropped back to fourth after crossing close behind her.

By coming right into the shore Ski made a comeback and slipped in between Nitro and Scud at the weather mark.

At the weather mark, just 15 seconds separates first from third. Similarly, a bit further back, there was just 18 seconds between fourth and sixth with the boats rounding as follows: TnT, Magic, MB, Nitro, Ski, Scud.

The boats opened up at full taps down the rocky shoreline before the gybe onto port and the finish.

There was no change to the order down the last leg. 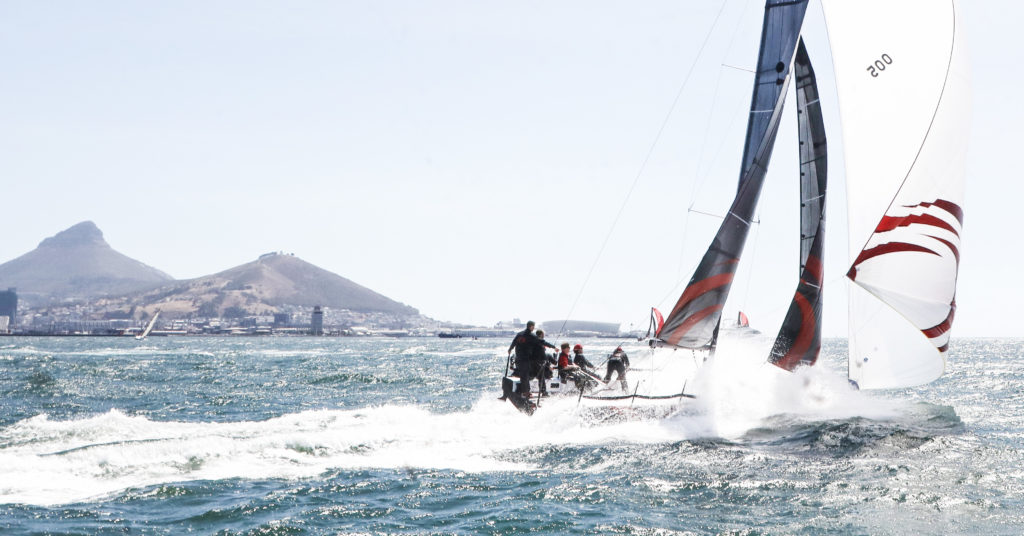 TnT blasting along at full speed on day 1.
pic by Ashleigh de Villiers

We are into the last day of Cape Town Race Week, it’s a clear sunny day, and the race course is set up along the western seaboard off Granger Bay up towards Mouille Point lighthouse. At present there is a west northwest breeze just breaking into the early teens and the glimmer on the water screams “let’s go racing”. With a vantage point surveying the entire course from the deck of the Radisson, it’s looking like a five star day.

The start was clean with boats nicely spread along the line. Nemesis was at the pin, Scud, MB, Magic, Nitro, Ski and CuAl closest to the committee boat. From the gun it was a flat-out race left to tack onto the port lift around Granger Bay.

Ironically the boats that started at the pin were the first to cross behind the rest of the fleet. Scud was most right, then Nemesis, Nitro, TnT, Magic and MB. TnT are looking very strong, with the trio of Magic, Nitro and MB in hot pursuit. They rounded in that order, followed by Nemesis, CuAl, Scud and Ski. 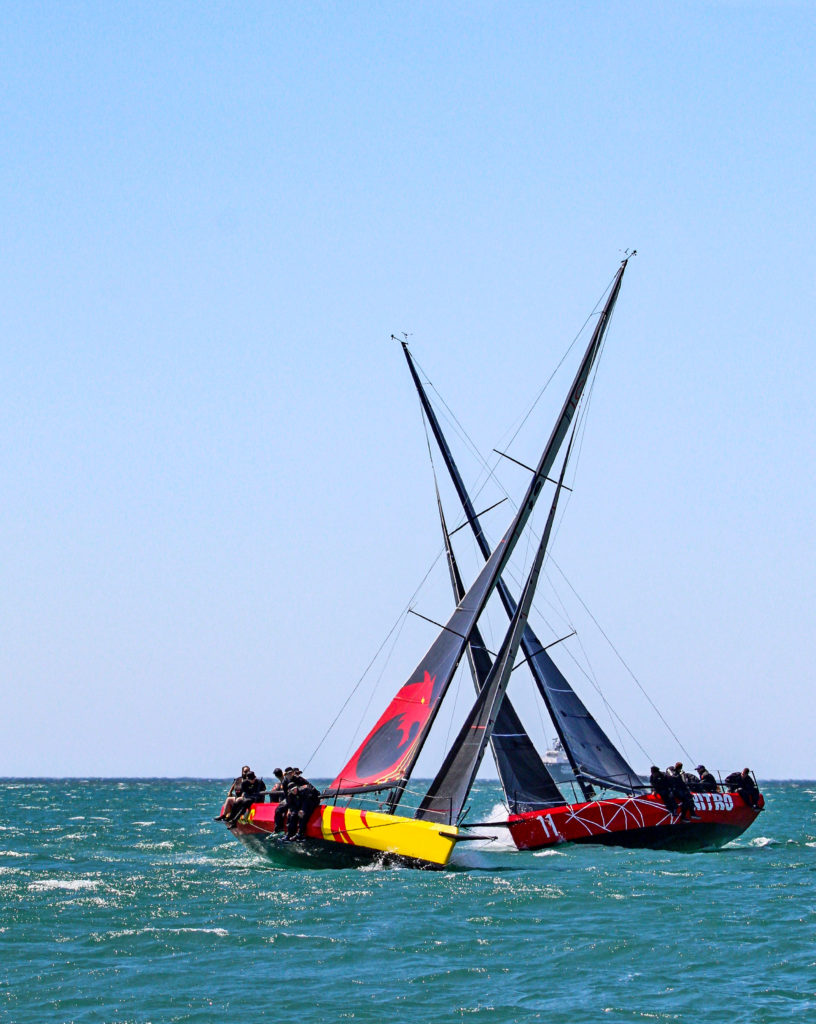 Magic & Nitro in a tacking duel as two brothers-in-law duel it out.
pic by Ashleigh de Villiers

The wind was strong enough for the boats to find a fast planing mode on starboard, and the critical gybe onto port layline was absolutely clinical by the top two, but Nitro spun out and MB’s kite was slow to fill after the gybe.

TnT and Magic elected to take the starboard rounding at the gate, with the rest electing for a weather drop and a port rounding – those being Nitro, MB, Nemesis, CuAl, Scud, Ski.

With Tina Plattner not sailing this regatta, her partner Tony is at the helm and the team have shown great pace, although their results have been inconsistent. Before this race, they were tied with Björn Geiger’s MB.

The boats stayed in a port lane offshore up the beat.

CuAl and Nemesis collided very hard and may have damaged their rigs as both boats bore away quickly and rapidly dropped their sails. Both boats retired swiftly and return to moorings.

The same top four were at the weather mark together, with growing separation between them and the others.

The boats screamed downwind and the order stayed the same until the finish.