Cape to Rio 2020. The Small Boats Are Dominating 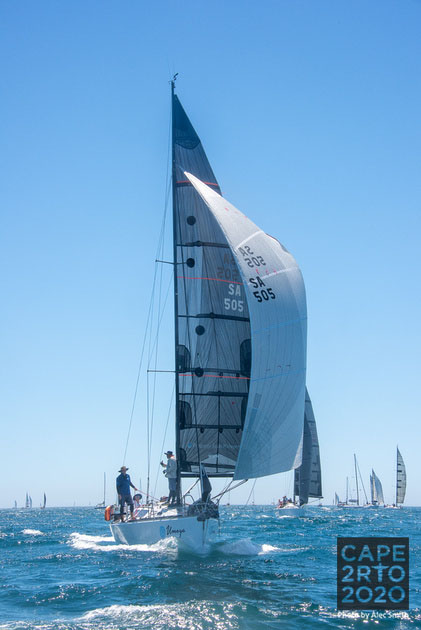 Umoya has had a great last 24 hours. Is she now becoming a ‘player’ in this race?
pic by Alec Smith

For those not following the race on the YB Tracker let me tell you that you are missing out on something special. This is the first race to Rio that has used YB Tracking, and it is simply the best as it’s clockwork-like reliable and has really good information available for those who want the basics as well as for those who like delving a bit deeper and getting down to the nitty gritty of ocean racing.

I said yesterday how important it was to stick to a strategy, and that the ‘JM Busha 54 team’ would take the lead on handicap, which they did. But this morning (04h00 UTC) it shows them having dropped down the leaderboard again. That’s nothing to be concerned about as they are still well positioned as the most northerly boat. What has happened is that as the wind has increased so the bigger boats are picking up speed and distance. ‘JM Busha 54′ is the second smallest boat in the fleet at 35-feet, with ‘Indulgence’ the smallest at 34-feet. So at the moment she is punching above her weight, making good progress to the north and west, and positioning herself well for the next few days.

What is impressive is that ‘Umoya’ and ‘JM Busha 54′, both at just 35′, have had the best days run of 129nm and 106nm respectively – substantially more than their opposition. ‘Umoya’ has had a great 24-hours and should she be able to maintain this performance could well enter the fray as a boat to keep a weather eye on.

Of interest is that ‘JM Busha 54′ has sailed the greatest distance of 885nm in the fleet since the start. ‘Mojie 1′ at 40′ has done 127nm in the past 24 hours, and 884nm since the start, and now appears to be emulating the course of JM Busha 54. These boats have good wind pressure in the 12 knot-plus range, and maybe a duel between them is on the cards?

Looking at the weather ahead, ‘San Salvador’ continues to be the most western boat, and still wears the leaders crowns on the tracker for both line and handicap honours, but she also looks to be sailing towards lighter winds, which could then give the advantage back to the boats further north.

Sailing is a waiting game – and what pans out in the next few 4-hourly updates is going to be very interesting indeed.

Back ashore there is a very palpable feeling of impatience to get going as the boats in start 2 on Saturday put in their final preparations.

This is going to be a fascinating start as two highly-charged multihulls will pit themselves against each other, and are like dogs on a tight leash just waiting to be set free. They are of course ‘Maserati’ and ‘Love Water’. ‘Maserati’ comes with an experienced crew headed by Giovanni Soldini who won the double of line and handicap honours in the 2014 race aboard a monohull also called ‘Maserati’. Soldini has tons of multihull experience, and with a highly experienced crew will be looking for line honours again in this 70-footer.

But at 80-foot, ‘Love Water’ will have the advantage of waterline length, and a highly charged crew looking to break records and zip across the South Atlantic at breakneck speeds. Craig Sutherland is the skipper, with a predominantly South African crew.

This is going to be a duel worth following closely.

The rest of the second start boats are all monohulls, and some fine ones too – also with many a close duel in the pipeline.

This is the second start fleet:

News From the Water 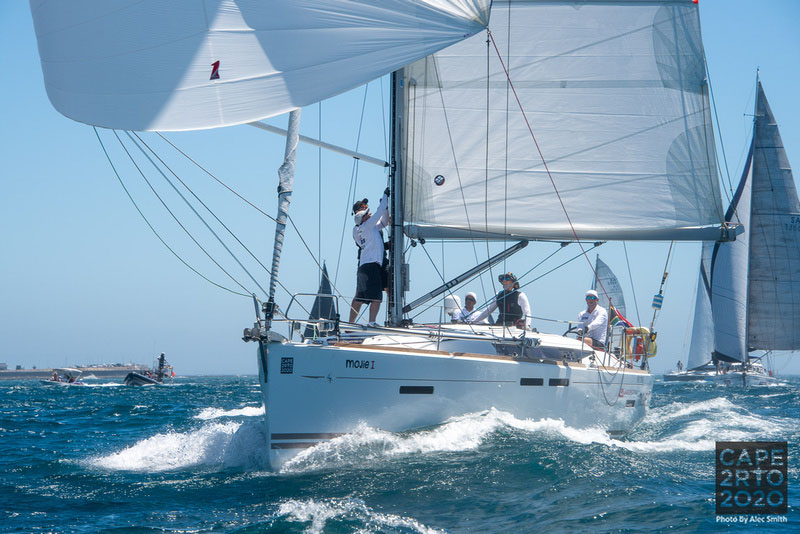 Laurium Capital Mojie
The Mojie crew is settling well into the steady rhythm of life at sea. “What shall we do today” becomes a fairly simple question to answer. Keep sailing! And naturally, to debate, and debate, and debate, how best to navigate our course.

To gybe or not to gybe, that is the question. After sailing for 5 days we’ve barely left the coast of Africa; only a chip and a putt from Walvis Bay! Do we head West towards Rio, but into the calm of the huge high pressure system, or do we continue to follow the isobars around the high, in search of steady winds. After initially taking a fairly Westerly route, we’ve now found ourselves more to the East than some of the competitors. We’re keeping a close eye on all the other yachts, but particularly the Simonis 35s who have similar handicaps to Mojie.

One of the Simonises, Ciao Bella, was only about 23 Nautical Miles away at 08h00 UTC this morning. Ciao Bella is skippered by a brother and sister duo of the Vaal Family Robinson, sailing royalty in South Africa. We felt somewhat less than fully focussed after reading their blog (see FaceBook…JM Busha 54). Having chosen the Easterly route early on, they enjoyed stronger winds although many more miles. The young, energetic crew has been constantly grinding winches and trimming sails. Having chosen the shorter, though calmer route, the scene on Mojie has been somewhat different. Our endeavours have included swimming and fishing, and today included freshly baked muffins!

JM Busha 54 has sailed the greatest distance of 885nm since the start.
pic by Alec Smith

JM Busha 54 (from – Hamlet (Jonathan))
At this point you should have a pretty good idea of what life on-board feels like and hopefully I’ve lessened the FOMO just slightly.

But I fear I may have forgotten one or two crucial points.

For one, look around you – for as far as the eye can sea there is only blue. Ocean stretching on forever, yet somehow dwarfed by the endless sky above. Listen. To the rush and bubble of the wake chasing behind you and the crash of the odd wave off to the side. Hear the wind over the sails and past your ears and feel the world roll and twist and fly underneath. Spend each day in wonder of a nature so pure that it’s easy to imagine that humans don’t exist. Begin and end each day with sunrise and sunset – golden and orange and red painted under each cloud. Enjoy the simplicity of living an adventure and watching birds fly with wings skirting the crests of waves.
If you can imagine all of this then you’re right here with us, if not, you’ll have to come and do it yourself or endure the FOMO.

As for what happened on day 5: it was mostly a drifter, glassy water with no wind. Some of us had a swim and we tried to rest and not let the frustration of these conditions get to us. It would seem we had it better than our competitors though as we have pulled slightly ahead – it’s still a very long way to Rio though and food rationing has begun.

Right now Mics is making dinner, Em is helming, we’re listening to Billy Joel’s Piano man, the sun is setting and there’s nowhere else I’d rather be.