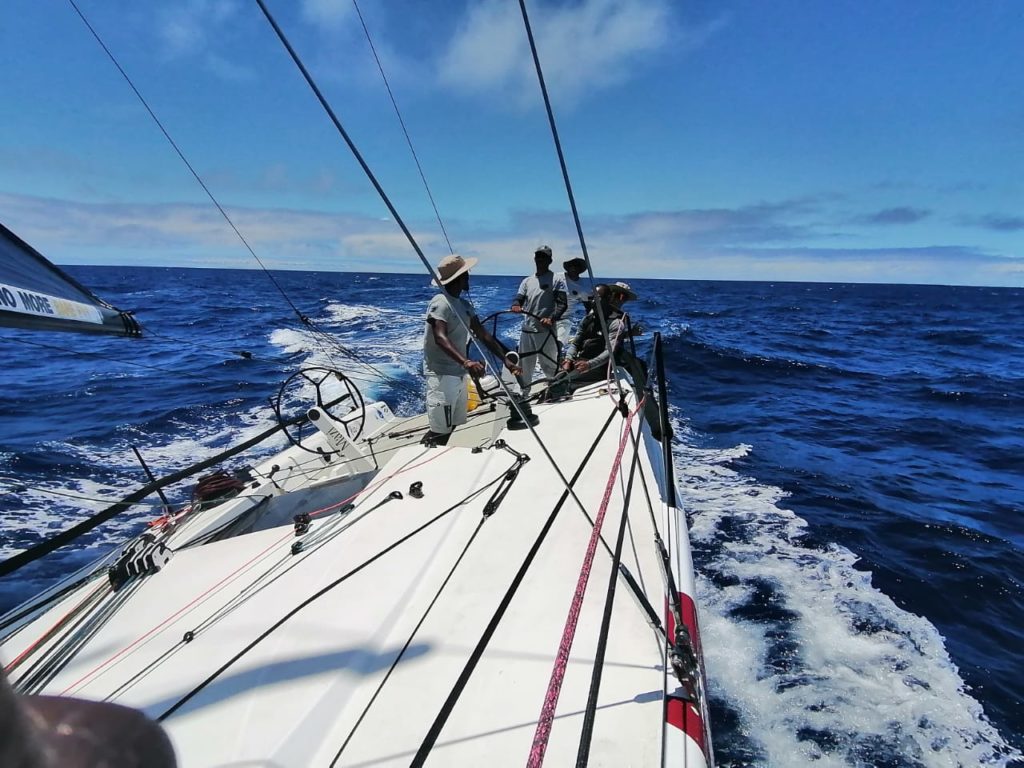 Zulu Girl is back racing again after suffering steering damage.

Yesterday I reported that Zulu Girl had slowed considerably and was pointing the wrong way. It turns out that she had broken her steering cables, and was sailing on the emergency tiller until the repairs were complete. Added to their woes was a crewman being injured when boiling water burnt his foot.

These are simply part of life at sea, and with any luck the steering should have been repaired fairly smartly. As for the injured crewman, these boats carry a very comprehensive medical kit, and at least one crewman should have a competency certificate in first aid, so the injured man should have been patched up pretty smartly. While a setback, the skipper, Siya Vato, said “our intentions are to continue racing”.

Fighting spirit indeed, and again on the podium in 3rd place at the 10h00 YB Tracker update.

Ocean Racing is tough, as the crew of Zulu Girl have found out. But what events like this do is teach every single crew on board the power of self-sufficiency, the ability to make a plan when the chips are down, and to come through the problems as better seamen.

Looking at the handicap positions for the monohulls first, Mussulo has snatched the leader’s crown back from Saravah, followed by Zulu Girl, Haspa Hamburg and then Ballyhoo Too – with a mere 15 hours separating them on corrected handicap time.

The weather is light, although the wind could well pick up a bit during the day as the leaders close the Brazilian coast and the finish line – and give them a trouble-free ride to the finish. But beware of Cabo Frio as the wind there can simply shut down for many hours at a time.

What the stormy weather has done is open the gaps between some boats which had, up to the storm, been having tight duels across the ocean. JM Busha and Mojie is one of those duels that shows the former to have opened a 55nm gap. While Saravah is holding on to second, the gap between her rivals has also opened quite substantially.

JM Busha 54 is closest to the finish with 150nm to go.
pic by Alec Smith

JM Busha 54 is closest to Rio with 150nm to go, followed by Haspa Hamburg, Mojie and Mussulo with 208nm.

With the finish over the horizon, and the taste of Caipirinha and ice cold beer getting stronger by the hour, as too are thoughts of “loooong” freshwater showers, the Race Committee stands to be busy as the finishers pile in. Mussulo, JM Busha 54, Mojie and Almagores are due to finish tomorrow, followed the next day by Saravah and Zulu Girl.

It’s only once they start finishing that we will know who will wear the final winner’s crown. One thing is for certain though, the overall winner will not be JM Busha 54 as she is too far off the pace by 3 days or more on handicap, despite sailing a great race.