Cape to Rio 2020. Please Marvel at the YB Trackers 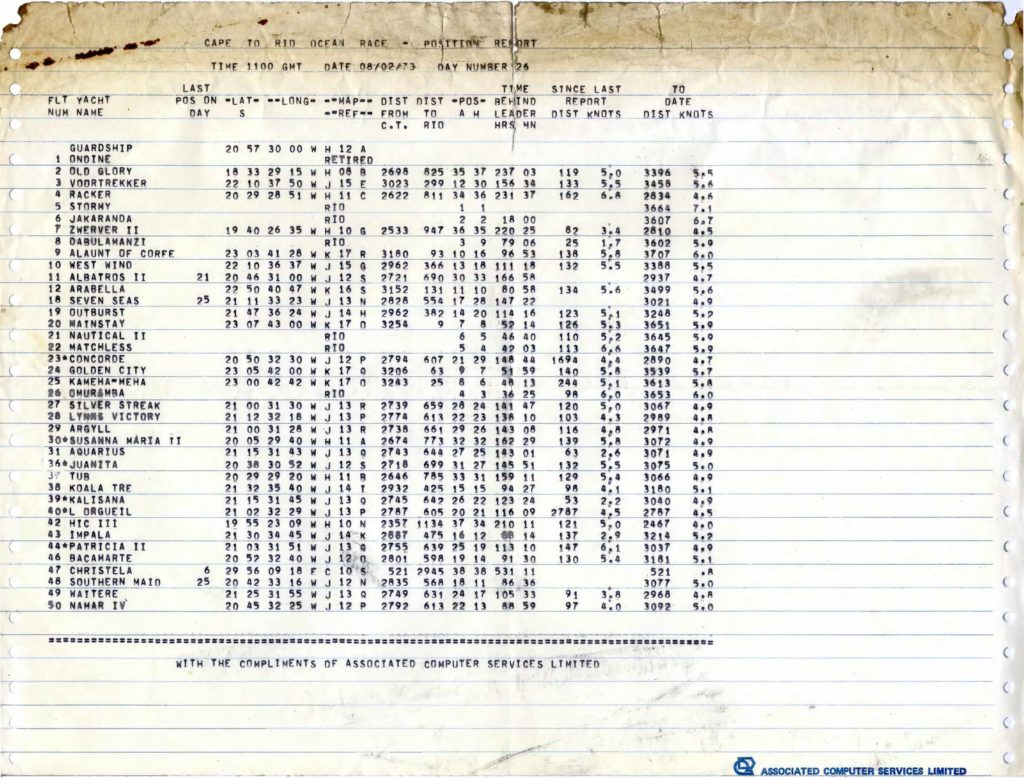 A 1973 example of what people had to work from to get a picture as to what was going on in the race. All this is information is now on the YB Tracker every 4 hours.
Image from the SAILING Mag Archives & Historical Records

One has to continue to marvel at modern technology, especially the YB Trackers, which bring the race live to so many followers the world over. Back in the old days when the South Atlantics Races were big attractions, the SA Navy would provide a Guardship to follow the fleet and act as communications vessel for the yachts to report in to on a daily basis via SSB (Single Side Band) radio, providing their position and an opportunity to pass info on to the media contingent aboard.

It was slow, cumbersome and did not always work as planned. And the info came out on a printed computer spreadsheet some hours later – an example from the 1973 race is given in this report. But now one simply views the race at 4-hourly intervals and is able to get a really good picture as to what is happening out there in the South Atlantic as they provide so much information.

Last evening the big dogs, ‘Maserati’ and ‘Love Water’, were shadowing each other while sailing at a shade under 30 knots of boat speed – and less than 4nm apart. One could also see that parts of the fleet were going to get some big wind – and that the gentle ride until then was going to become wild and wet.

So how has the fleet fared since the 18h00 report last evening?

The big dogs dived very deep and were within 80nm of the rhumb line route from Cape Town to Rio. The rhumb line of course being the shortest distance, and certainly not the fastest route to take. This morning the 10h00 YB Tracker shows these two having sailed even closer to the rhumb line – now being 40nm off. Will they cross to the south of it? There’s good chance they will as they eye a weather system to the south, but as always, time will tell.

The northern and southern fleets continue to converge, and in terms of monohull handicap honours it’s the southerners who have the upper hand at the moment, hogging the top six spots. It’s ‘Mussulo’, ‘Saravah’, ‘Zulu Girl’, ‘Haspa Hamburg’, ‘Ballyhoo Too’ and ‘Almagores II’ in that order, with ‘JM Busha 54′ from the northern fleet showing the way in 7th spot. 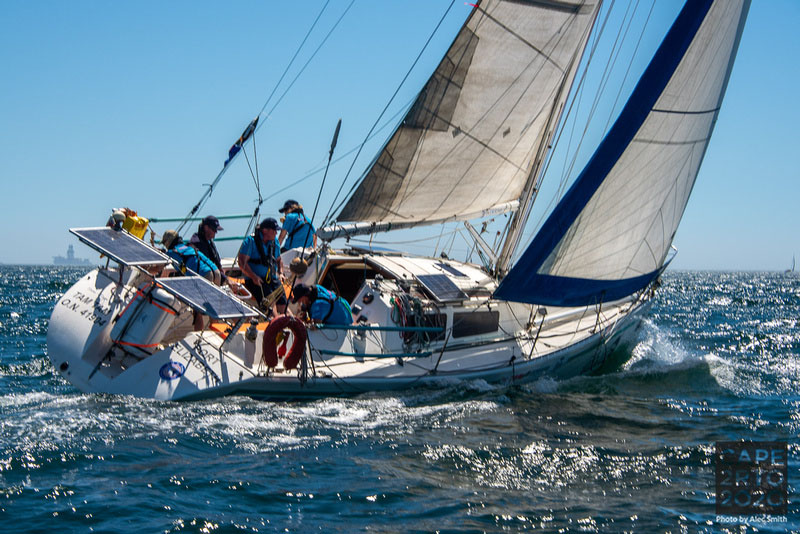 Jasper van der Westhuizen and his cruising crew are putting in a solid performance.
pic by Alec Smith

There has been an on-going duel between ‘Mojie’ and ‘JM Busha 54′ for days now, and once again they could cross tacks later today. The youngsters on ‘JM Busha 54′ are sailing really well and are constantly faster and further than ‘Mojie’ which is 5-feet longer. 205nm in 24 hours is good going for a 35-footer, and this young team will be relentlessly attacking all the way to the finish.

The southern fleet have had some 30-knot plus winds for some hours now, and look to hold those for another 12 or more hours yet. Many will gain advantages, but some might crack at the pressure and relentless water rushing over the deck as they speed along. Unless total concentration is maintained by all on deck, there could be some thrills and spills to report on.

Back to landlubber queries again, this time the watch systems. For many landlubbers it’s not easy to comprehend that these boats are raced 24/7 from start to finish. No, the sails don’t come down at night, and the anchor is not set at night. Instead they go all out at night, especially the smart teams, as yacht races are won and lost at night.

The rule of thumb for watches is a simple two watch system with 6 hours on during the day and 4 hours on at night. What this does is give the off day watch a good period to rest, do the onboard chores, and even some cooking. With four hours on and four off at night, every watch gets just one night watch every second day – and that’s always a time to look forward to.

There are those who find four hour watches quite long and tiring, so many different variations are implemented, especially if the weather is good and wind on the light side.

My watch is almost up, so in closing it’s worth noting that the two big dogs have a shade over 1000nm to go to finish. They are approaching the runway, and looking for the very best way to approach as fast as possible as the prize is line honours, gorgeous bronzed bodies on Ipanema and Copacabana beaches, and of course cold beer and Caipirinhas.