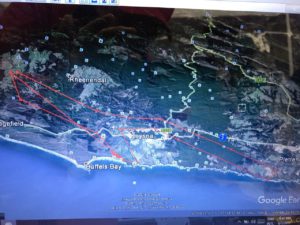 The following National Sea Rescue Institute (NSRI) stations have been called out due to the Cape Storms and the Knysna fires:
Station 12 Knysna.
Station 14, Plettenberg Bay.
Station 26, Kommetjie.
Station 2, Bakoven.

Southern Cape:
From just after midday on Wednesday 7 June, NSRI Knysna and NSRI Plettenberg Bay have been engaged in assisting the Eden District emergency services and Eden, George, Knysna and Plettenberg Bay Fire and Rescue Services at runaway fires that have engulfed the district from Sedgefield to Plettenberg Bay.

The picture gives an overview of the affected areas.

In multiple incidents involving the collective emergency services, Police, Fire Departments, ambulance services, NSRI, Disaster Risk Management, Traffic Services and members of the public to evacuate residents and animals from the fire that has been fuelled by strong winds and high temperatures.

Community Halls are full of residents where NSRI have assisted the Emergency Services to provide medical treatment and treatment provided to Fire Fighters battling the flames and assisting to fight the fire.

The NSRI Knysna sea rescue craft assisted to evacuate people from shoreline homes along the coastline and in the Knysna Lagoon where residents were cut off by fires.

In some cases NSRI and emergency services personnel were forced to evacuate their own homes.

Loss of property is reportedly extensive.

This is expected to go on through the night and thoughts are with all those engaged in helping at the fire. NSRI, emergency services, Traffic Departments, Disaster Risk Management, Fire Services and Police and the hundreds of members of the public that are helping.

Sadly loss of life has been reported.

Kommetjie:
At 10h08, Wednesday 7 June, NSRI Kommetjie dispatched the sea rescue vehicle to a local restaurant where an adult male suffered amputation of his left big toe while cutting a fallen tree that had been uprooted during the storm and gale force winds.

NSRI medics treated the man on the scene and transported him to hospital in a stable condition.

NSRI Kommetjie have also removed a fallen tree from Kommetjie Road during Tuesday nights storm, and assisted 3 vehicles that were trapped in the surf near to the Kommetjie slip-way, towing all 3 cars to safety, and removing a large signboard that had collapsed and blown into the road during Wednesday.

Camps Bay and Bakoven:
NSRI Bakoven duty crew responded to Camps Bay tidal pool at 15h58, Wednesday 7 June, where an adult female had been caught up by the high tide trapping her on rocks.

The lady had reportedly been sitting on the rocks for an extended period during today before being cut off by the high tide.

It appears that bystanders helped the female to safety and she was treated by Community Medics paramedics and by ER24 ambulance services paramedics, but after she refused further treatment the SA Police Services took her in at their Police Station for safe keeping until family could be reached.

During this incident NSRI Bakoven and Cape Town Fire and Rescue Services responded to Bakoven where the NSRI Bakoven sea rescue station, flooded by the high storm tide, suffered fire damage to the electrical box at the station.

In preparation for the storm most of the equipment and the sea rescue boat ‘Rotarian Schipper’ had been moved to safety the day before, but sadly extensive storm damage and also fire damage (from the electrical box that caught on fire when water reached that height in the base) will require extensive repair work.

TO REPORT A SEA RESCUE EMERGENCY DIAL 112 FROM A CELLPHONE