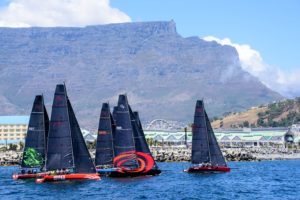 All identical, this first Cape 31 one-design regatta was a HUGE success.
pic by Alec Smith

In a pre-event comment I mentioned that the Cape 31 was being raced in anger for the first time over the weekend – and what close racing with many lead changes it was too.

The comments form those who competed, plus from those relegated to watching from the sidelines who simply had to savour the moments, have been more than positive. 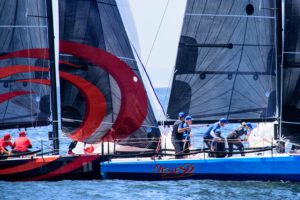 One-Design racing is all about matched boats and close racing – as witnessed here.
pic by Alec Smith

In short, the Cape 31 quite simply provides far better one-design racing than ever expected. The future of the class locally is rosy, and again from comments received, it appears that there may well a flurry of orders in the next few days. That will be a big boost for the class – and the vision of it’s founder Lord Irvine Laidlaw.

Tina Plattner and Toni Norris won the 8 race regatta by the slenderest of margins – just a single point separated their boat TnT from Nitro skippered by Mike Hayton and David Rae.

Third was Scud sailed by Luke Scott and Greg Davis.

Local sailing has something to be very excited about as the Cape 31 certainly delivers one-design racing at its very best.

I just cannot wait to see the whole fleet in close quarters racing once they are all launched.