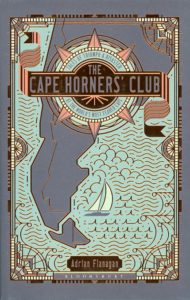 by Adrian Flanagan
Published by Bloomsbury

Until I read this, I was unaware that there is an official Cape Horners Club – aptly named the International Association of Cape Horners (IACH). The association keeps a register of those who apply for membership – those who don’t do not feature. The reason for bringing this up front is that there are no South Africans on their register that I can see. A pity!

Cape Horners are a very special breed, especially those who traverse the Horn singlehanded. And with many being ‘reserved’ their expeditions and experiences are not always recorded nor made public.

But there are many whose passages, whether westward roundings or eastward roundings, have been tough, and which ultimately make rivetting reading. And that’s what this book is all about.

The author himself has rounded The Horn, a Westward rounding, in his 38-footer ‘Barrabas’, so he knows first hand what it’s about, the rigours involved, and the human sacrifice one has to endure to conquer that bit of rock. So he has written with the confidence of one who has done it and experienced it.

Many of the old ‘greats’ in sailing have their passages covered here, including the likes of Vito Dumas; Bernard Moitessier; Sir Francis Chichester; Sir Alec Rose; Sir Robin Knox-Johnston – and many more.

Included too, are the passages of some of the women who have traversed this hostile part of the ocean, like Dame Naomi James; Kay Cottee; Lisa Clayton and Jessica Watson.

Few were spared a jolly good thumping, yet all generally felt an overwhelming sense of achievement having beaten ‘The Horn’.

All the passages are well written and filled with sufficient information to make one’s spine tingle, for the hair to stand up on the back of your neck, and to say: “wow, these people have been tested to the limit and beyond”.

One so-called tradition to put to right is that having rounded Cape Horn one is permitted to wear a gold earing. The ear on which the earing is worn, is the ear that was closest to the Horn during the passage! So there you have it from the Cape Horners themselves.

Finally, and this is something I was not aware of, is the memorial to those lost at Cape Horn. It was inaugurated on 5 December 1992 by the Chilean section of the Cape Horn Captains’ International Brotherhood. The sculptor depicts the silhouette of an albatross on the wing, pressed from 10 steel plates each 6mm in thickness. The Albatross is the emblem of the Brotherhood, and, according to myth, the embodiment of the soul of a sailor lost at sea.

Now that’s a sculpture I want to visit and see first-hand – so it’s at the very top of my bucket list.

The book is available from SAILING Books. Cost is R350.00 plus postage.