Assessing the Global Climate in July 2019. July Was the Warmest Month on Record for the Globe

The global land and ocean surface temperature departure from average for July 2019 was the highest for the month of July, making it the warmest month overall in the 140-year NOAA global temperature dataset record, which dates back to 1880. The year-to-date temperature for 2019 tied with 2017 as the second warmest January–July on record. 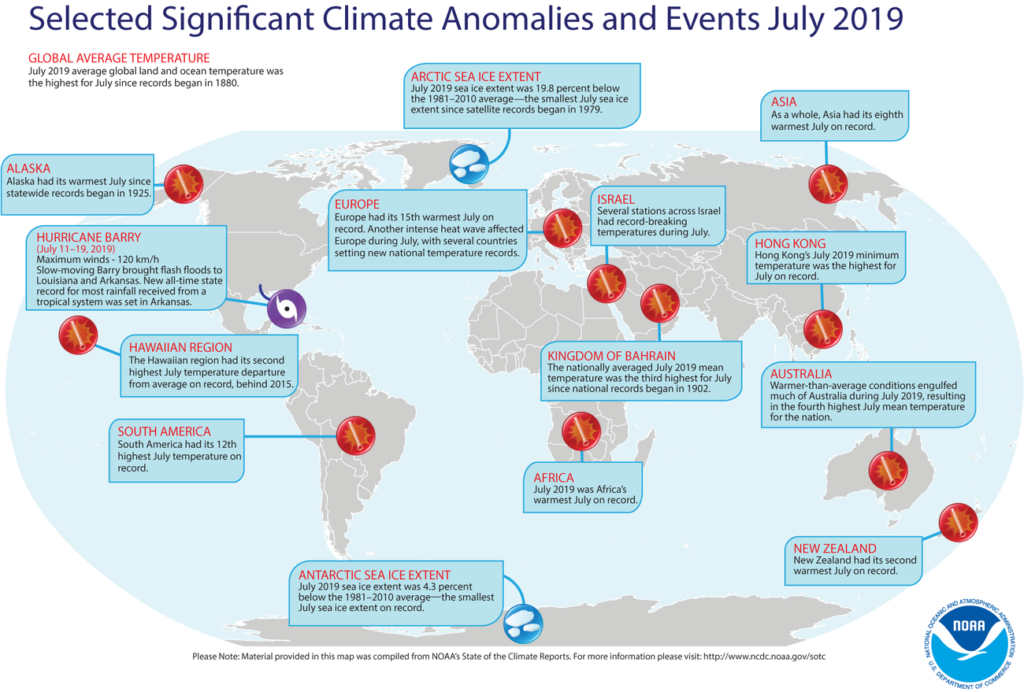 This monthly summary, developed by scientists at NOAA National Centres for Environmental Information, is part of the suite of climate services NOAA provides to government, business, academia, and the public to support informed decision-making. 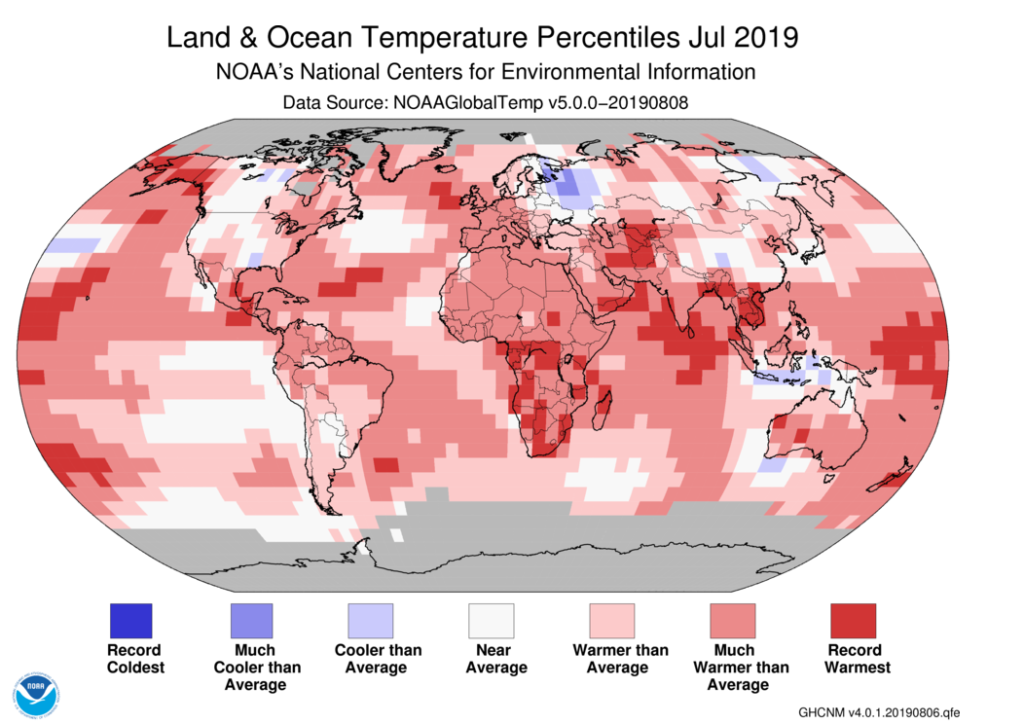 ○ July 2019 also marks the 43rd consecutive July and the 415th consecutive month with temperatures, at least nominally, above the 20th century average.

○ Regionally, North America, Africa, Asia, Oceania, the Hawaiian region, the Caribbean region, and the Gulf of Mexico had a July temperature departure from average that ranked among the 10 warmest Julys on record. Of note, Africa had its warmest July at 2.97°F (-16.12 C), besting the previous record set in 2015 by 0.32°F (-17.6 C).

● The July globally averaged sea surface temperature was 1.51°F (-16.93 C) above the 20th century monthly average of 61.5°F (16.38 C) and the highest global sea surface temperature for July on record. Compared to all months, this value tied with September 2015 as the sixth highest monthly global ocean temperature departure from average among all months (1,675 months) on record. The 10 highest global ocean monthly temperature departures from average have all occurred since September 2015. 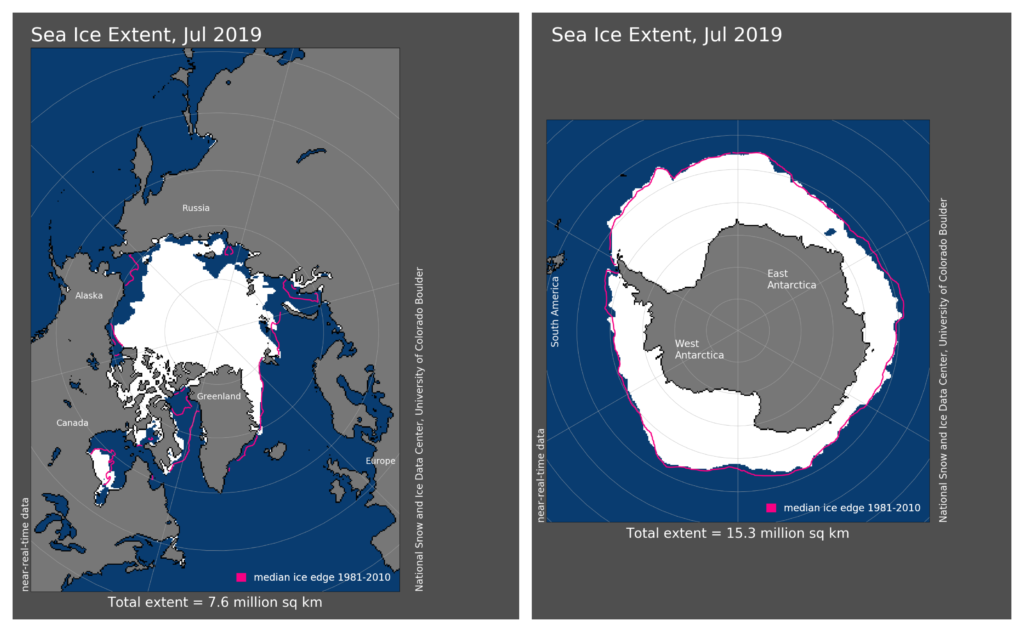 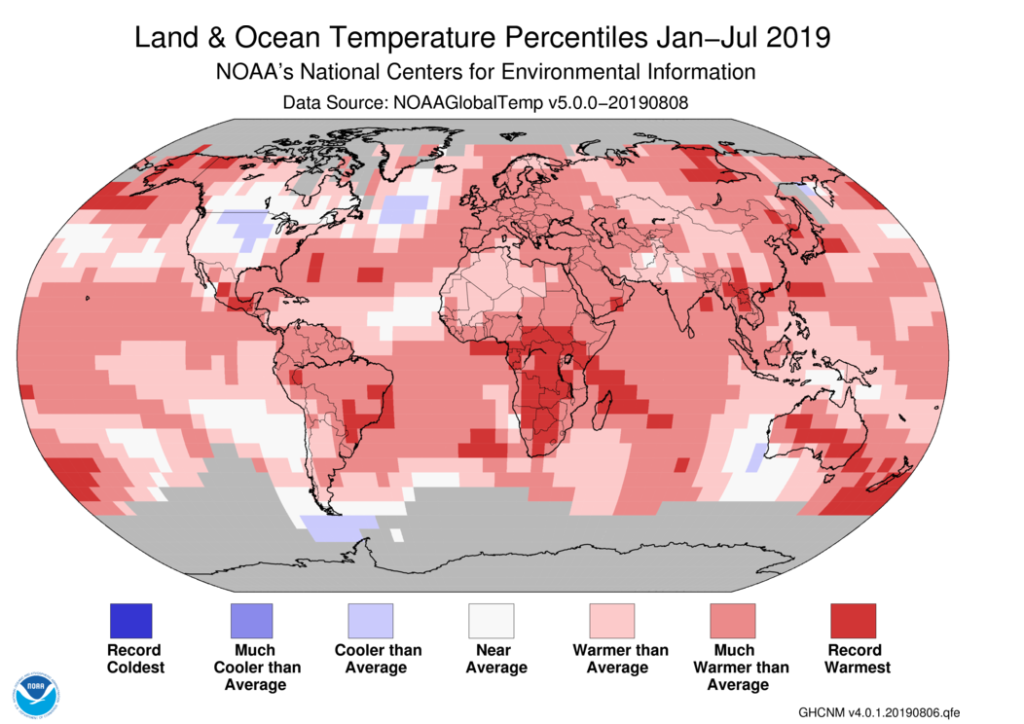 ○ Record warm January–July temperatures were present across the southern half of Africa and parts of North America, South America, Asia, Australia, New Zealand and its surrounding ocean, as well as parts of the western Pacific Ocean, Atlantic Ocean, and western Indian Ocean. No land or ocean areas had record cold temperatures during January–July 2019.

NOTE. All Fahrenheit temperature have been converted to Centigrade temperature as carefully and accurately as possible.