John Bertrand.  “Right blueprint to be among the world’s best sports” 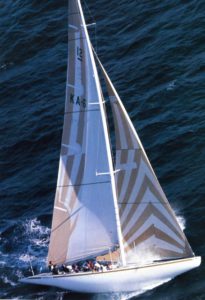 John Bertrand was skipper of Australia II when they caused the biggest upset in America’s Cup history by beating Dennis Conner in 1983.

“These guys are now fighter pilots who have to go out and fly in mortal combat,”

The assessment of former America’s Cup winner and Australian sailing legend John Bertrand, casting his eye over the current crop of America’s Cup sailors, having witnessed first hand the revolution taking place in one of the world’s oldest and most prestigious international sporting competitions.

The America’s Cup may be a world-renowned sports event, but recent years have seen many facets of the competition undergo a transformation including the racecourse, the TV coverage, the spectators and the sailors themselves.

However, the greatest changes have perhaps come on the water with the boats themselves, helping to create an incredible visual spectacle that is unrivalled in sailing, let alone major global sport.

From the traditional monohulled vessels, such as Bertrand’s iconic Australia II which was revolutionary for its time in 1983 with its winged keel, to the new-age vessels competing for the America’s Cup this summer which are far more akin to F1 cars, flying across the water – this revolution in the boats used in the America’s Cup further reinforces Bertrand’s original view.

“We now have high-speed projectiles, operated by super-fast decision makers, and some incredibly close racing which is very cool,” said Bertrand, skipper of Australia II in 1983, the boat which finally broke the 132-year stranglehold American teams had enjoyed on the America’s Cup.

“I don’t think anyone involved with selecting the boats on show out there could have ever envisaged just what they are capable of and what we have witnessed so far.

“I’m absolutely delighted to see the America’s Cup competed for in multihulls because it is fitting to the competition that has always been at the cutting edge of technology. If they weren’t flying, it wouldn’t be as spectacular.

“From where I came from, this is a new world of sailing and it’s incredible how far it has come in a relatively short space of time.

“You go back to my day and we sailed at around 8-9 knots maximum in a huge hull – how boring is that for TV and the people on the shoreline?

“These guys are flying around the course at over 40 knots, working pretty much constantly at maximum heart rate. It’s just another world and I love it.

“I’m fascinated by the technology so I’m a sucker for this stuff. I would love to be involved nowadays because it is another world and is extremely exciting.”

It would also appear that Bertrand is not the only one that the ‘new world’ of America’s Cup racing has won over.

“My wife has watched a lot of racing over the years and always commented on how boring it is, but this new world is even exciting for her so it is great and really exciting for the future,” he added.

“It is not just old America’s Cup fans who are enjoying the racing, the speed of these new boats is also really exciting for young people, who might be seeing The America’s Cup for the first time, and that’s great.

“The race is on between all sports to be relevant to the younger generation and it is important for a product like this to be super-relevant if it is to continue to grow.”

However, casting his eye to the future, Bertrand is confident that the America’s Cup’s current format gives it the ideal ingredients to continue flourishing.

“The basic direction this competition is going in is very strong and it has a great blueprint to put itself right amongst the world’s best sports,” stated Bertrand.

“I look at sports like Formula 1 and how that worldwide series format has also worked perfectly for the America’s Cup. At the moment this competition has all the same ingredients, not only to survive but to continue to thrive.” 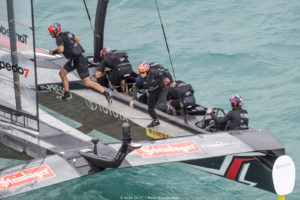 Dennis Conner, 74, who for so long was public enemy number one in New Zealand, is adamant the regatta needs to return down under for the sake of its own future.

“I like what I’m hearing about the possibility of going back to a mono hull and not making it the same circus that we have (in Bermuda),” Conner said in an interview with Rachel Smalley on Newstalk ZB.

Before the regatta in Bermuda, all of the competing syndicates, except Team New Zealand, agreed to a blueprint for the next two editions of the Cup.

It would see the event take place every two years with a belief that entrant numbers will double. But Conner is decidedly against that.

“I think if Oracle wins, we could have another event every year and what would separate the America’s Cup from just being another regatta?” he asked.

“It used to be something special and they’ve turned this into a completely different event.”

Conner won the Cup in 1974, 1980, 1987 and 1988 and is widely regarded in sailing circles as the man who essentially took it from an amateur event to professional status.

He believes Oracle Team USA’s move to take it to Bermuda has had a detrimental effect.

“Right now they (people) don’t like it,” Conner stated. “There’s not many big boats in Bermuda, the hotels are empty, the TV ratings are bad and the whole thing, I think, will be an economic disaster for Bermuda.” 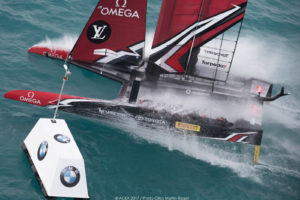 Conner, who walked out on an interview with the late Sir Paul Holmes in 1989 and told NZ designer Bruce Farr to “get off the stage loser”, wants the regatta back in New Zealand.

“People want to go back to what they saw in Auckland with a downtown event, the centre of the America’s Cup, everybody having a great time, lots of people, lots of boats, lots of spectators and I see nothing but good to come out of it.”

Conner also believes this could be the last time Sir Russell Coutts will be involved in the America’s Cup. Coutts, who led Team NZ to its famous victory over Conner’s Young America in 1995 in San Diego, before defending the Cup on the Hauraki Gulf in 2000, is head of the America’s Cup Events Authority and Oracle Team USA.

“I wouldn’t be surprised if he hangs up his sailing shoes and retires.,” Conner said.

Team NZ are 3-0 ahead of the resumption of racing on Saturday.

“I don’t see Oracle coming back with the same miracle they did last time,” Conner said.

“I’m already looking for my spot there in the Viaduct.”

Who is Dennis Conner?
• Tagged “Dirty Dennis” by his detractors and “Mr America’s Cup” by his supporters, Conner,74, lives in California.

• He has won 28 different world sailing championships and an Olympic bronze medal.