America’s Cup Day 1. Do the Kiwi’s Have a Real Edge? 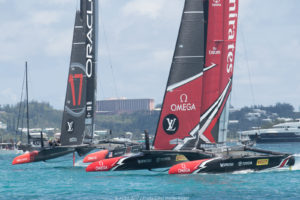 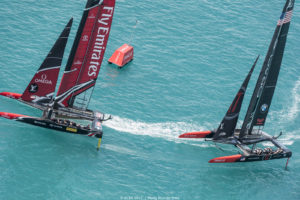 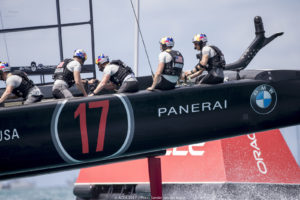 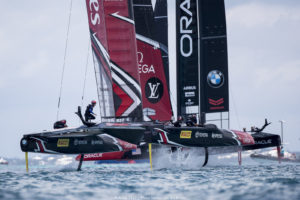 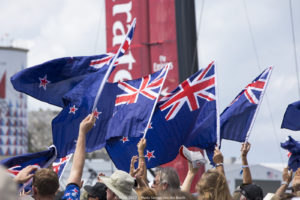 The result of the first two races is one all Kiwi fans will tell you was ‘on the cards’. It was the perfect start to this event, especially as the Kiwis. Emirates Team New Zealand, had and extra 2-odd knots boat speed at all times – and boat speed is what this sport and competition is all about.

Jimmy Spithall looked crestfallen at the end of the second race, maybe even shocked as it was not a result he and Oracle Team USA (OTUSA) supporters were expecting. I just wonder if Jimmy Spithall is not too ‘cocksure’ after he reversed an 8 – 1 deficit in the last finals in San Francisco? He has every right to be cocksure, as he was part of the team who engineered the biggest comeback I sport – ever. But coming from a team with endless funding and the very best of everything, plus being put on a pedestal as possibly ‘one of the greatest America’s Cup sailors ever’ may well have gone to his head. Despite all this he no right to underestimate the Kiwi’s and has done so with dire consequences so far. But it is early days yet and time will reveal whether the Kiwis will go all the way and win.

There are many out there, especially those close to the event, who view a Kiwi victory as disastrous for the future of the America’s Cup. This may be due to the protocols signed by all teams except the Kiwis which state that the show will go on irrespective, with the Louis Vuitton World Series and the America’s Cup finals again in two years time.

The Kiwis are known to want to take the event back to its roots, which means changes, as well as strict nationality rules. The Kiwis are the ONLY team with a full compliment of crew from New Zealand.

But back to the racing. The Kiwis looked cool, calm and collected, and were sailing fast and smart. They had one blip in race 2 when they were out of phase with the wind and let OTUSA come back at them. But a poor tack by OTUSA saw the Kiwis speed off to an unassailable lead.

As Oracle Team USA sailor-turned-commentator Joey Newton put it, grudgingly, but with a tinge of admiration in his voice, “It’s hard to argue that they’re slow.”

Emirates Team New Zealand Skipper Glenn Ashby was quick to highlight they had plenty to improve and work on over the next 10 days if the team are to be ultimately successful.

“It was such a tricky day for both teams, we made a few human errors with our boat handling that we need to work on and address.” said Ashby. “These guys are only going to get stronger, so we need to also. This is not going to be anything less that a huge battle we are expecting.”

Perhaps the unexpected strength today was the superb starting by Emirates Team New Zealand twice getting the better of rival Jimmy Spithill.

It was the start which set up victory in race one, Emirates Team New Zealand driving Spithill over the line early with Oracle penalised. Helmsman Peter Burling then compounded the penalty by further slowing down the American boat before foiling away to build a huge lead.

But the light winds also made for very tricky conditions which produced a heart-stopping moment for the Kiwis when they ran out of breeze and sank off the foils with the finish in sight.

As the Americans charged in the Kiwi boat gradually recovered, rising out of the water and sprinting to the line for a 30 second win. Burling, though, far from satisfied.

“There are so many things we can work on and improve on,” he said. “But we’re really happy to win with so many errors around the race track and really happy with the speed.”

The margin blew out once more and at one stage Emirates Team New Zealand were ahead by 1 minute & 35 seconds, only to see the Americans find pressure and storm back to close within three seconds at mark five.

With the cyclors working overtime to produce more oil pressure the Kiwi’s were able to pull off a series of manoeuvrers which allowed them to hold its slender lead. The Americans then had a bad gybe which sat them in the water, while the Kiwi boat lifted away again to win by 1 minute & 28 seconds.

Skipper Glenn Ashby praised the work of the cyclors: ”It was a massive effort on the hydro. The shifty, puffy conditions meant huge movements of the dagger-boards and wing. We never stopped trimming and the boys got an absolute flogging.”

The team will now be reviewing their performance to try and iron out mistakes, both skipper and helmsman saying they’d got plenty to ponder after today.

Having started the day on minus one, Emirates Team New Zealand are one up in the first to seven series. There are two more races scheduled for tomorrow with similar light conditions forecast.

“We had our opportunities,” said skipper Jimmy Spithill. “But the bottom line is they made fewer mistakes today than we did and that was the difference.

“I thought Tommy and the boys did a great job of getting us back into it both times. It’s just a shame we couldn’t pull it off.

“We’ll have a good debrief tonight, make some adjustments and come back stronger tomorrow.”

“In this breeze, it’s difficult to draw conclusions on boat speed… Clearly we weren’t sailing at our best but we also had our opportunities. In both races there were some chances. But these guys (Team New Zealand), at the end of the day, made fewer mistakes” said Spithall.