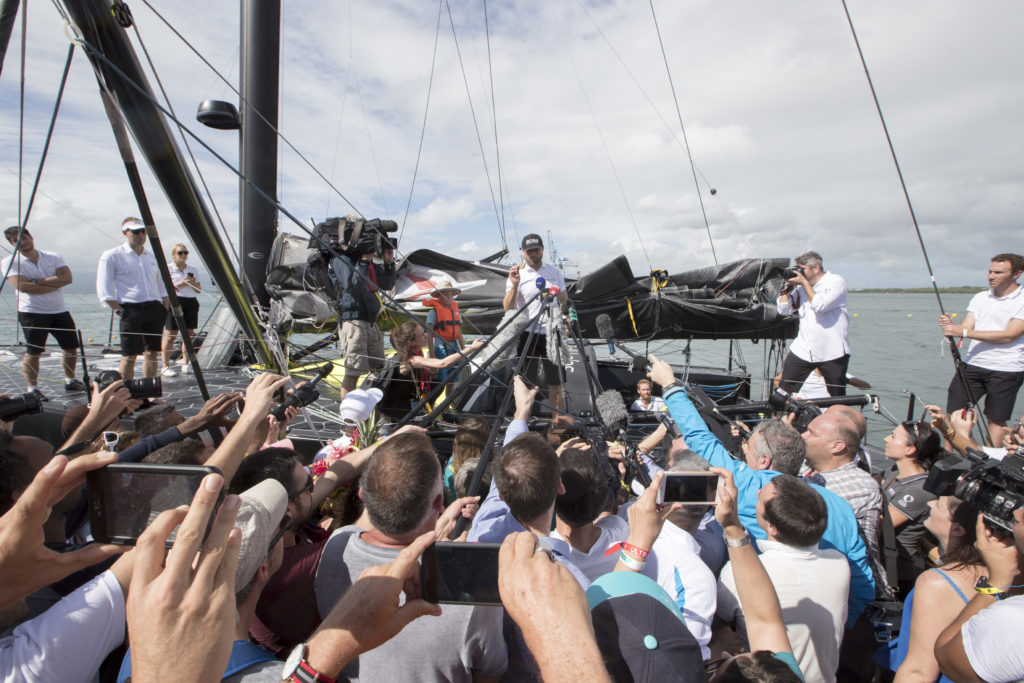 “The story is about detail and, in the final last minutes, I didn’t get the detail right” – Alex Thomson on the dock in Guadeloupe.
pic by Alexis Courcoux

Alex Thomson made this statement: “I do not deserve to win the Route du Rhum-Destination Guadeloupe”.

That was after finishing the race having run aground and extricated himself by using his engine – for which he was hit with a 24-hour penalty.

As British yachtsman Alex Thomson stood on board his damaged yacht Hugo Boss, moored to the quayside in Guadeloupe, he told the assembled media that he did not deserve to win the Route du Rhum-Destination Guadeloupe.

Thomson had been leading the 3,542-nautical mile solo transatlantic race almost from the start on November 4 off Saint Malo and was approaching the Guadeloupe archipelago when he over-slept, allowing his boat to hit the rocks on the northernmost tip of Grande Terre island.

In order to save his boat from being wrecked the 44-year-old sailor had to start his engine to get back into deeper water. Although he managed to complete the race and was the first in the 20-strong IMOCA class to cross the finish line earlier today, he was subsequently handed a 24-hour time penalty by the race jury for using his engine. 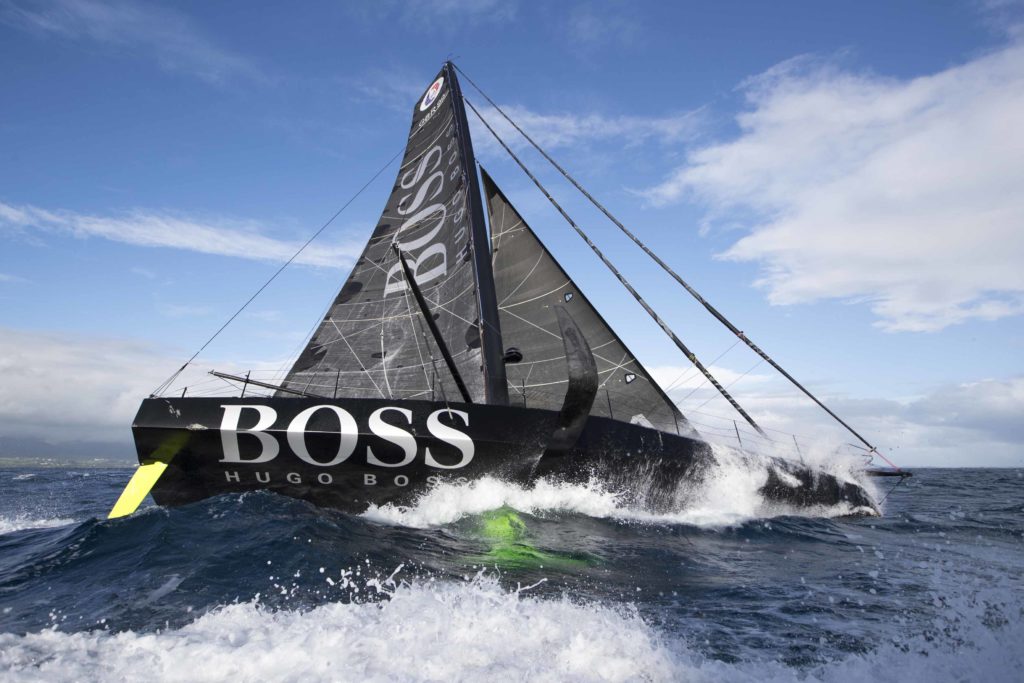 Alex Thomson was the first in the IMOCA class to cross finish line earlier today, but was subsequently handed a 24-hour time penalty by the race jury for using his engine.
pic by Alexis Courcoux

That penalty initially looked as if Thomson would not even finish on the podium as Paul Meilhat on SMA, Yann Eliès on UCAR-Saint-Michel and Vincent Riou on PRB were all capable of finishing before his total elapsed time with his penalty added.

A clearly hugely disappointed and at times emotional Thomson put a brave face on his fate. The grounding that caused apparently only superficial damage to the bow, stern and one foil on the starboard side of his boat, came in the closing stages of what would have been a thumping victory and his first major race-win in his 20-year professional career.

“It’s a real shame for me and the team to be in the position that we are in,” said Thomson who has been third and second in consecutive Vendée Globe solo round-the-world races. “The jury has decided that I have a 24-hour penalty which will mean I will not win the race. How do I feel about that? Well I think that is very fair because I don’t think I should win the race after hitting Guadeloupe.” This was greeted with spontaneous applause from his audience.

“This sport is about detail and, in the final last minutes, I didn’t get the detail right. Like I say, to be last night grounded on the rocks, I just feel very lucky to be here with the boat with very little wrong with it – a few holes but I sailed here under my own steam so I feel very fortunate,” Thomson added. 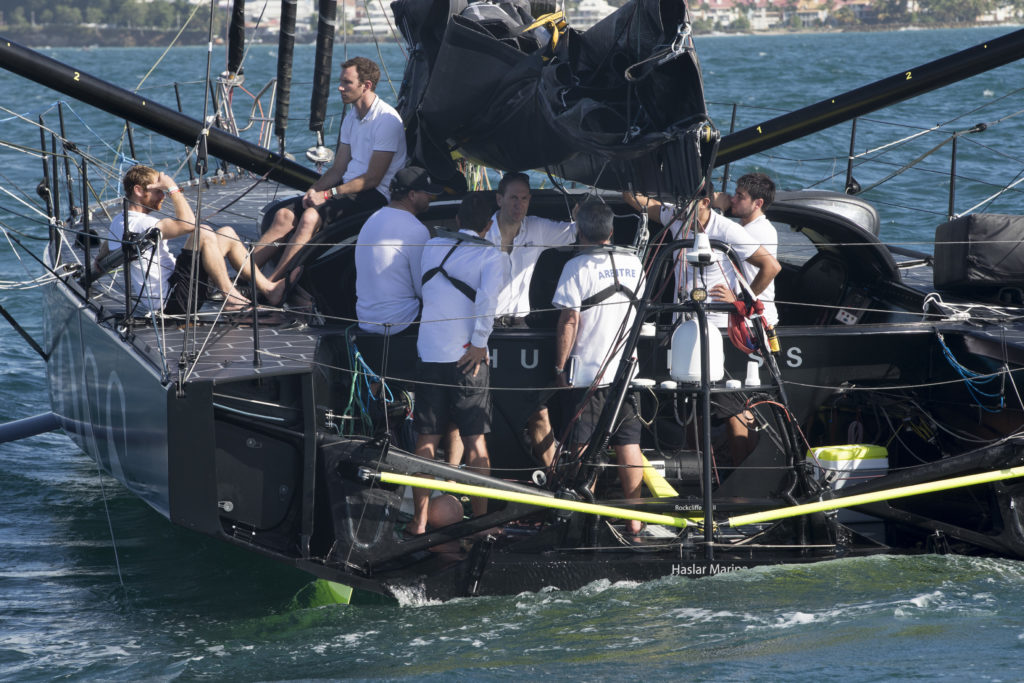 The jury joined Alex on board to hand him his penalty.
pic by Alexis Courcoux

Brandishing a piece of rock that he must have found inside the boat which he said would be a souvenir of his collision with Grande Terre, Thomson explained that he had gone to sleep knowing he would soon come close to a gybe point off the coast. However a wristwatch that he wears that is designed to give him an electric shock to wake him, failed to go off because it was out of charge and he slept through the audio alarm.

“I slept through – I didn’t hear it – and when I woke up the alarms were going and the boat was strange,” said Thomson. “I went up on deck and I could see Guadeloupe – I didn’t know it was Guadeloupe – I couldn’t understand what was happening until I looked at the chart and then I could see I was on Guadeloupe…haha…I had arrived!”

In his predicament and having to explain what happened Thomson could have been forgiven for struggling to keep his composure, but he did that and not only spoke fluently, but saluted Meilhat who at that stage had about 150 miles to go on a boat that does not have foils.

“I hope Paul will win,” said Thomson, his voice momentarily cracking. “You know, he has done a really great race on a boat without foils and I look forward to welcoming him tomorrow. He should be the winner.

So was this sportsmanship or simply good PR? Thomson displayed great sportsmanship qualities by acknowledging his mistake, by admitting he did not deserve to win and for welcoming the winning boat without once ruing his penalty. But, it was also tremendous PR as his sponsors have undoubtedly had great mileage from his mishap, and from his wonderful sportsmanship. 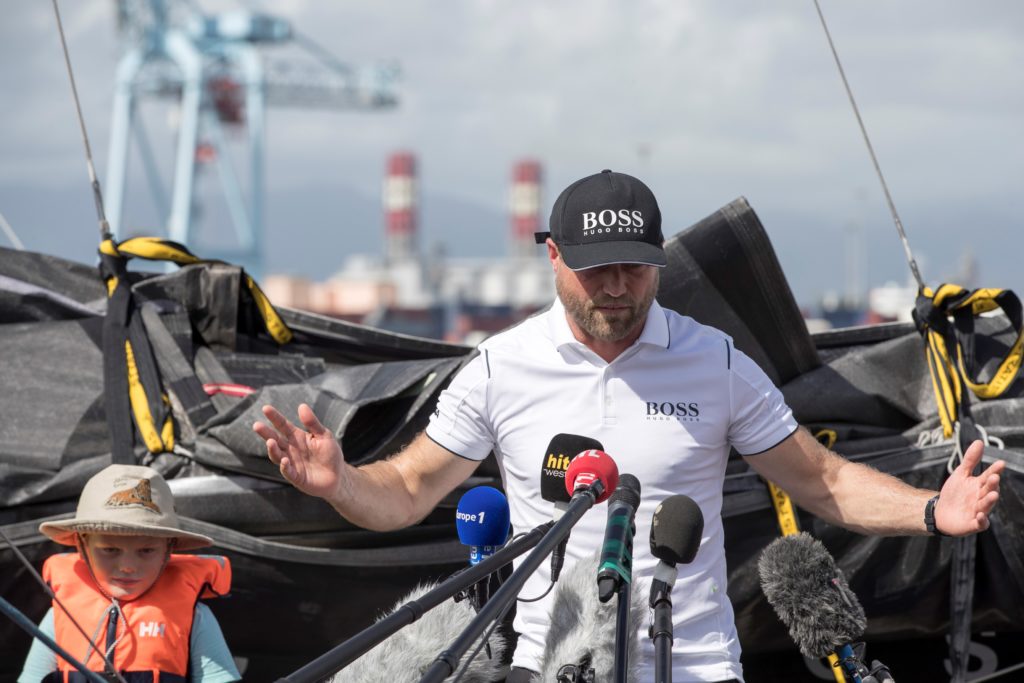 Alex Thomson spoke with media at the dock and saluted Paul Meilhat who is less than 150 miles behind.
pic by Alexis Courcoux