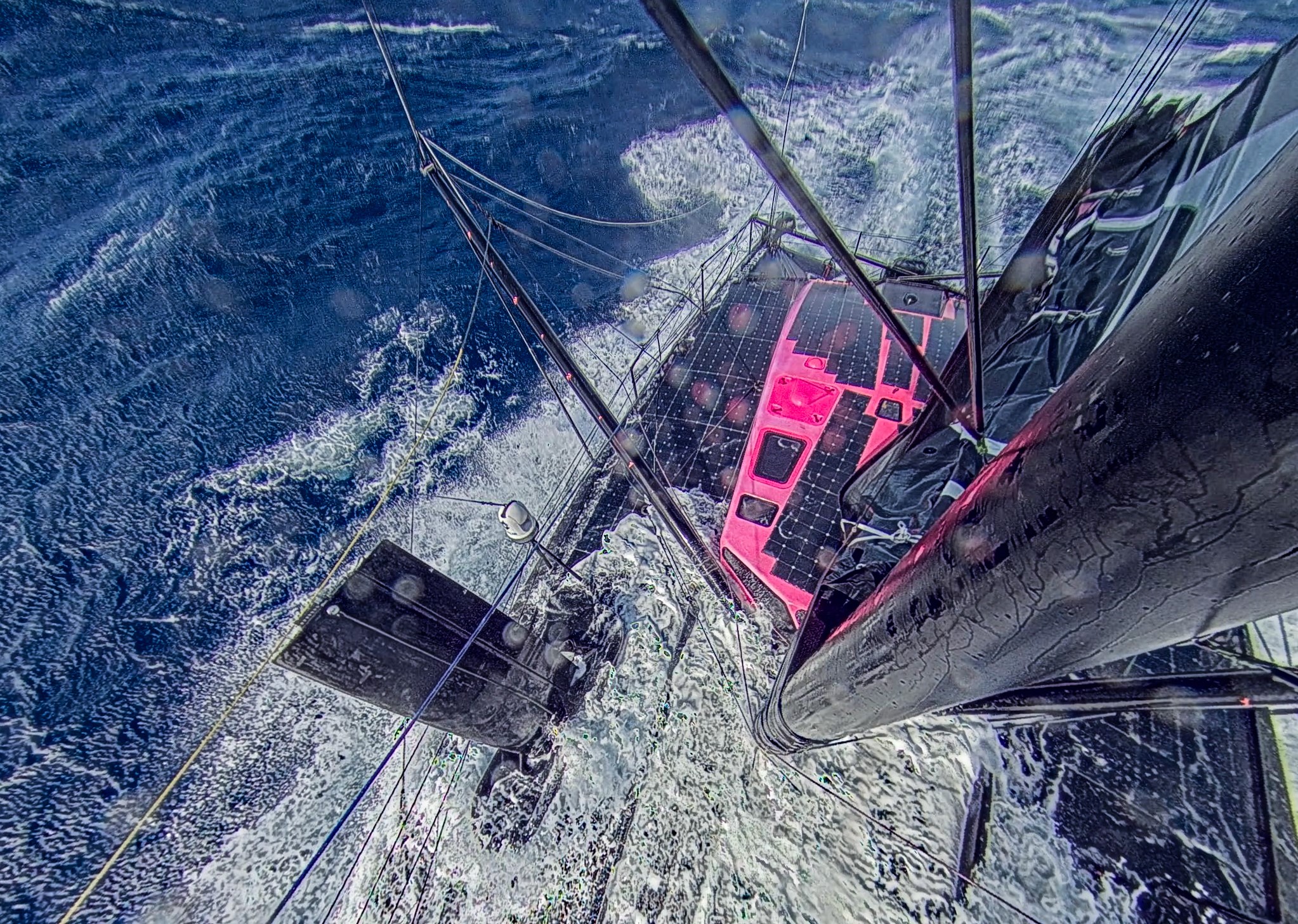 A bird’s eye view of Hugo Boss at speed during a recent storm.
pic by Alex Thomson Racing/Hugo Boss

After a week of racing in the Vendée Globe, Alex now heads south after passing through Storm Theta in some challenging conditions. The routing had Hugo Boss tacking just before the eye of the storm, however 70 miles from the centre with consistent wind of 50 knots and 5 metre waves, the boat violently broached. Whilst the boat was on its side and head to the wind, Alex decided to sail away from the storm’s centre in a south westerly direction. Since then, Alex and Hugo Boss have been making good progress leading the fleet south, and as the storm tracks to the east, conditions on Hugo Boss became more manageable overnight. Hugo Boss is now sailing at full speed downwind towards the trade winds.

The first 7 days of racing in the Vendée Globe has seen difficult weather conditions for the IMOCA fleet. With low pressure systems scattered across the North Atlantic, the skippers have had to cross some aggressive weather fronts, followed by taking on tropical Storm Theta. During this first period of heavy weather, several boats have been unfortunate to suffer damage, including close rival Jérémie Beyou who has had to return to Les Sables d’Olonne to make essential repairs.

Until now, the fleet has remained close together as the tough conditions have not allowed the foiling boats to show their full potential. With the leaders now passed Storm Theta and approaching the more consistent trade winds, the foiling boats are expected to stretch their wings as they head towards the equator.

Technical Director Ross Daniel gives an update on how Alex is doing after the first week onboard Hugo Boss: “Alex has managed to get himself into a great position this early in the race. On Thursday night he took a tactical decision to carry out a series of gybes back towards the low pressure system, which the rest of the leading group chose not to do. Consequently, Alex made some good gains to the south which allowed him to approach Storm Theta at a preferred angle. Over the last week Alex has worked hard to preserve the boat through variable conditions and sail fast when he can”.