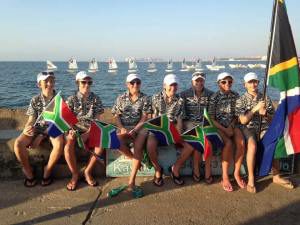 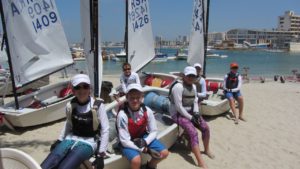 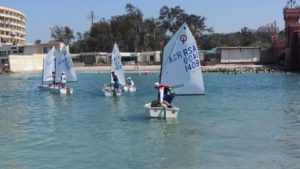 On Friday at 03h30 was the end of Eid, which is the post Ramadan celebrations.

Unfortunately the much feared and anticipated Egyptian Enteritis caught up with competitors in general. No one at breakfast was owning up to this, but on the way to the regatta centre, when the translator got the bus to stop outside a pharmacy, everyone jumped off and ordered the same anti-gippo medicine.

The opening ceremony was a very special occasion. Our team shirts were a major hit – well done Axel. We were completely swamped by entire families wanting to take selfies with us and it all got rather jolly. We held babies, posed with moms, dads and children, gave out SA flags and dare I say we were the most popular team there. There was high security with lots of police and navy boats patrolling around. Each team had a chaperone provided by the local sea scouts.

We knew the racing was going to be difficult with light winds and a short choppy swell – completely the opposite conditions the team has trained so hard in. The Egyptian are all, bar one local, from Alexandria. The Angolans have exactly these conditions at Luanda as do the Algerians.

The Angolans are starting to look very good with 3 outstanding sailors in the mix. It appears that they have lots of full time pro coaches who are regularly sent to Europe on courses, or have recognised coaches visiting them. It is something we are going to have to look at if we are to stay abreast of the rest of the oppie world.

After 6 races the RSA results are as follows: