A ‘Stroppy’ Sprog. Sprog No. 1 Being Restored 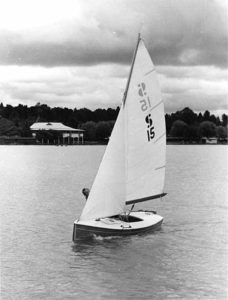 Stroppy – the first Sprog ever built.

Like myself, there are others with a passion for preserving the history of our sport. Warwick Owen in Port Elizabeth is one, while Frans Loots on St Francis is another.

Both the above in particular have an interest in preserving the first Sprog ever built. She is named ‘Stroppy’ and was languishing in the Bayworld museum in Port Elizabeth until Warwick Owen went in search of her – and a new home for her. Being more ‘tatty’ than ‘stroppy’ Frans Loots stepped in and volunteered to restore her, and through Charmaine Wynne of the museum, permission was granted for Loots to take her away and weave his magic.

Interestingly her designer donated her to the museum in 1952.

Stroppy’s Restoration
In May Loots reported that the boat was almost complete in terms of fittings, spars, foils – including the cotton sails. Loots reported: “The sails are Egyptian Cotton made by a Dutch loft. Stroppy’s sail number was Z15. The Z being a Zwartkops Yacht Club fleet number. The sails that came with the boat is numbered 17. 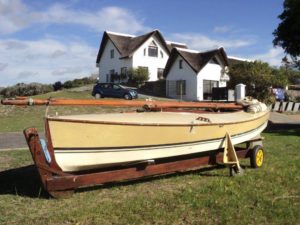 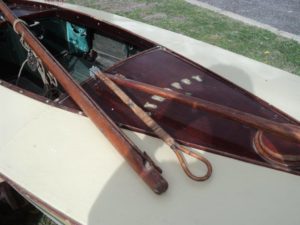 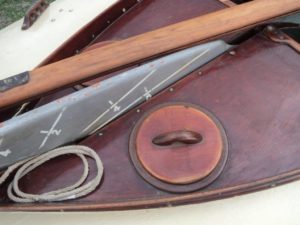 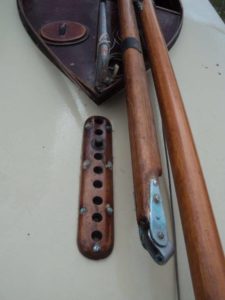 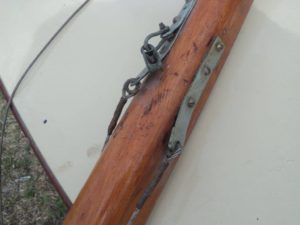 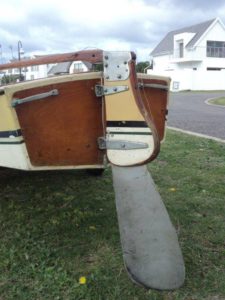 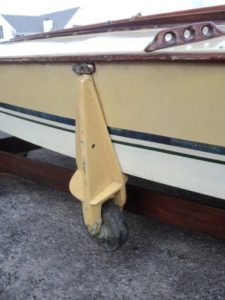 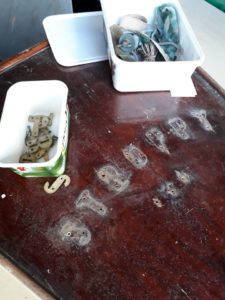 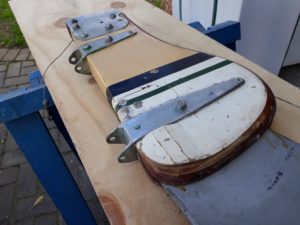 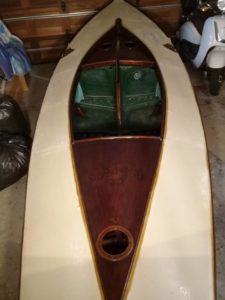 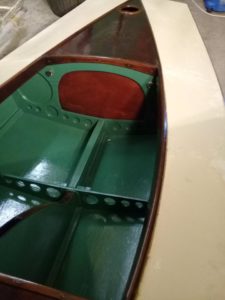 In the sail bag was this ” Receipt for Donation of items of historical interest”. It was received from Mr R. Stephenson, Tamar, 10 River Road, Redhouse. Richard Stephenson, an old sailing friend of mine!”

In July he reported that he had made some good progress on the boat. “Did a lot of sanding, and more sanding. As I am working it is becoming clear that the boat is in pretty bad shape.”

In August he started working on the rudder which was in rather bad condition. The veneers were lifting and will need re-gluing. The rudder stock was broken at some stage and there were signs of an earlier repair.

By November the hull was beginning to look somewhat respectable as Loots spent an inordinate amount of time spotting the screw heads with epoxy and micro balloon filler before sanding and sanding and sanding…… .As he said, one can never do enough sanding!

At this point he was ready to do the boot topping – and have it in exactly the same position as it was originally.

He then undercoated it and sanded most of the two layers of undercoat off to get a really good finish. He did another undercoat, and more sanding, and then began the top coats – and what else but more sanding between coats.

At the beginning of December Loots reported: “Some good progress. The bottom and sides are done. The blue and green waterline stripes will follow later. After dinner I applied another coat of varnish to the bits that are varnished. I will check the finish tomorrow morning and decide if it is the final coat – then pull off the masking tape. The next job is to paint the cockpit dark green, then paint the decks cream. Fortunately the sanding is all done so it is a case of dust off, mask the edges and a wipe down. Then lay down the paint.

That’s the progress to date, with the full restoration expected to be completed by the end of January 2018.

Some Past Reporting on ‘Stroppy’
Below are some of my scribblings written about ‘Stroppy’ in the past, as well as an update on her restoration progress.

Up-front I thank Warwick, Frans and others for the pics which are used to illustrate the history and restoration of this great lady.

The Sprog ‘Stroppy’
I am led to believe that ‘Stroppy’ was the first Sprog ever launched – and it happened in Port Elizabeth on the river where both the Swartkops and Redhouse Yacht Clubs were situated.

My old mate in PE, Warwick Owen of Due North Rum Club fame, managed to come across an old Super 8 film clip of ‘Stroppy’ and sent me a CD. It came from Bruce Baldwin who had the forethought to save it from his grandfather’s archive. 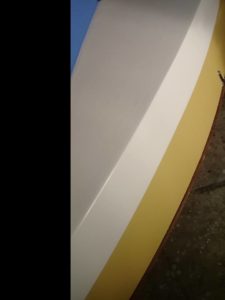 The footage is obviously old, but interesting all the same.

Also shown in the ‘film’ are two canon being fired by the Bridge Officer. These two canon are now housed in the display cabinet at ABYC.

This clip can be viewed HERE

70th Anniversary – Forgotten by the Sprogs!
Browsing through some old ‘Sprog Logs’ I have in my archives dating back from March 1956 to July 1961, I suddenly tumbled to the fact that the class had missed its 70th anniversary – which should have been last year. The first Sprog launched was ‘Stroppy’ – HH McWiliam’s boat which he designed and built himself.

The April 1958 Sprog Log gives this very brief history of the Sprog – under the heading “How it All Began” and written by her designer.

“It all began in 1938. I fell for an advertisement in an American Yachting journal for a knockdown kit with which to build a 14 footer. The boat turned out to be a freak, but I did discover the enormous strength of plywood and it did not take much imagination to see that something beamier would be more stable and faster. The idea was discussed with Helmut Stauch and he undertook to let me have a set of lines for a 14′ hull with a beam of 3′ and with 60 sq. ft. of sail. This turned out to be ‘Tippy’, appropriately named and the crankiest craft ever handled.

“Then followed five years of isolation from sailing, and as an ordinary seaman I was glad to have something to occupy my mind and pass away the dreary hours of watch. Somewhere in the Bay of Bengal in 1945 we had to heave-to in the tail end of a cyclone and jamming myself into a corner I had the urge to sketch the Sprog (naval slang for a small edition of something bigger and better). There my accumulated ideas were sorted out, some inspired by the construction of the Mosquito Aircraft.

“Not being an expert in the matter of evolving lines I again turned to my old friend Helmut Stauch who modified the lines of the hull and suggested a sailplan used in a 14′ canoe at T.Y C. These full sized sections were further modified in the prototype ‘Stroppy’ which was finally launched in March, 1946. She was constructed largely from ply stripped from the liner ‘Mauritania’ when her cabins were gutted for conversion into a troop ship. It is interesting to record that the entire boat cost little over £40 and the sails £7.16″0d.

“Stroppy’s performance at her first race was such that there were dozens of requests for plans. Several sets of half plywood frames were cut from the remaining stock of the ‘Mauritania’s’ cabin partitions; one for Helmut himself and another two for Albert Mild and Syd Robinson and another boat was built in Durban. So it was that in 1947 in Durban the first series of Sprog races were held and these were won by ‘Stroppy’.

“By 1948, articles published overseas brought requests for plans from places as far apart as Chile and Australia, Canada and Aden, Lagos and Madras. By this time it was discovered that our plywood was not water-proof and horrid smells arose from the watertight compartments and ghostly crops of mushrooms thrived. ‘Stroppy’ had to be overhauled frequently and by 1951 I realised that lighter and newer Sprogs were more than a match for the gallant old boat so she found a resting place in the Marine Hall of the Port .Elizabeth Museum.”

I do hope that the Class is able to make plans to hold a reunion regatta very soon, and to get all those old ‘Sprogites’ out of the woodwork and back on the water.

It was a common belief some years ago that unless you had won a Sprog national title you were not really a good dinghy sailor – hence the list of winners reading like a who’s who of sailing in this country.

2017 Sprog Nationals
These are being held at Midmar Dam immediately after Christmas, and John Wright has been drumming up support for the event, and expects a good turnout. There are people coming out of the woodwork to attend – so maybe this is just one of those ‘not-to-be-missed’ regattas?

Conclusion
I am personally delighted that those who collaborated on this project have seen a dilapidated old boat almost restored to her former glory – and her history preserved. Thank you Frans Loots and all who have been involved.