A Day of Roosters & Feather Dusters 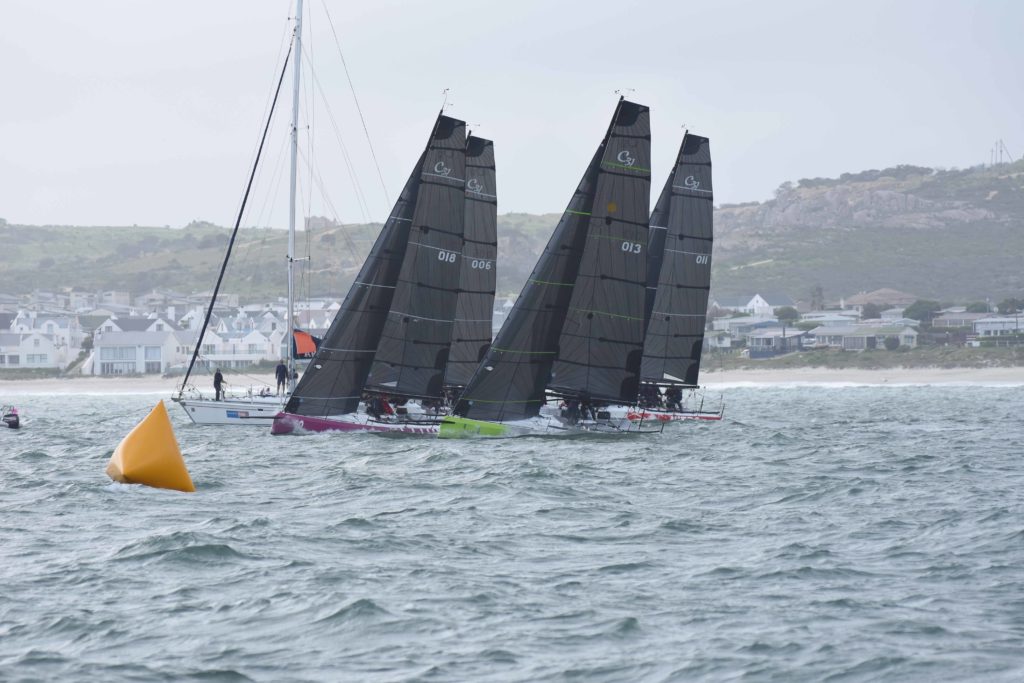 The start of race 3.
pic by Richard Crockett

But it was a day of roosters and feather dusters as the leaders kept extending their leads, whilst the rest of the fleet threw everything possible at them in an attempt to snatch the lead. Sadly for them these tactics did not work and they were reduced to being feather-dusters!

The finishes were pretty close, with just a few minutes between first and last.

The second of the compulsory races was set by Race officer Doug Alison who managed to get in the equilateral triangle course. Four rounds were needed to get the prescribed 12 nautical miles in length.

For the third race in a row the Royal Natal boat had the best start and led the fleet away. Witbank Yacht & Aquatic Club, having had a bad start to the regatta were the first to tack away from the fleet and head right, hoping to find some magic and redeem themselves.

The wind was from the north blowing between 18 and 22 knots, dropping towards the end.

There was much tacking and covering to the weather mark with the Royal Natal team there first, but not before they had lee-bowed the Royal Cape Boat. Protest flags flew, but no penalty turns were made by either boat – and no protest was lodged.

With that behind them the Royal Natal boat kept extending their lead and won pretty comfortably. Witbank managed to stay ahead of the Royal Cape boat to take second spot, and partially redeem themselves and their results from the previous day.

Race two was a tough one, for no other reason than the wind was in the ten knot and less range, and no room for any errors. Anyone who strayed to one side or the other of the course looking for an opportunity, was blind sided.

The Royal Cape team made no mistakes in this race and simply extended their lead at every mark. Significantly they made changes to their rig after the first race. Knowing that the wind would be light they softened their rig and it paid handsome dividends.

There was many a tacking duel up the first beat, especially between the Royal and Witbank boats who came together several times, with Royal Natal always having the upper hand. The fleet rounded with RCYC in the lead, followed by Aeolians, Royal Natal and Witbank.

Places changed until the Royal Natal boat worked her way into second spot, with Witbank always challenging and Aeolians bringing up the rear. That’s how they finished.

So ultimately the honours were shared today between Royal Natal and Royal Cape, but with two wins on day one the RCYC team lead the event overall. Interestingly both these teams have each won a compulsory race.

The last of the official courses has to be sailed before the regatta can be declared official, so hopefully the wind will play ball tomorrow and the required race is completed.