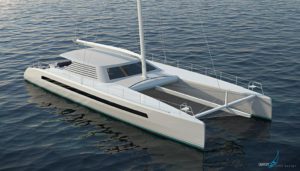 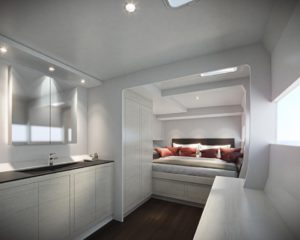 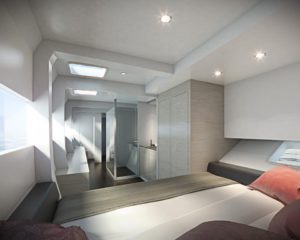 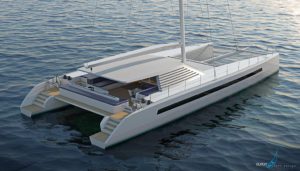 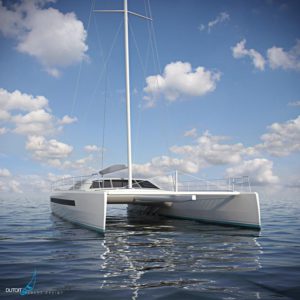 The ‘Windoor’ is one of the newest features incorporated into the design. It allows for huge amounts of natural ventilation with infinite adjustment options at the touch of a button. The design is a take on a ‘Gullwing’ style door, which hinges on the forward end of the coachroof top with mechanical linear actuators opening it a full 95°, allowing full access to the wing deck from the saloon.

Due to the large size and geometry of the doors it produced a design and engineering challenge. For sealing the doors the normal sealing method needed to be improved on, hence the use of radial inflatable seals, which also put a lesser load on the gutters and hinge mechanism.

The Windoor is being manufactured by Mecaplex at a hi-tech facility in Grenchen, Switzerland. Mecaplex specialise in producing multilayer transparency screens for aircraft, helicopters and various other vehicles. They also produce other customer specific products, such as acrylic machine covers, boat windows and specialised composite parts.

A new unique hybrid light-weight glazing method called ‘Liteshield’ is being developed specifically for the Windoor design. This method combines acrylic and float glass together, using the benefits from both products resulting in a light weight and scratch resistant surface.

The other new features include a low contemporary coachroof as well as optimised hull lines, this is to give her the best possible performance, but still retaining the features the Open Ocean range is known for, including the spacious aft cockpit, open plan saloon area with panoramic views.

Located in Cape Town, South Africa, Two Oceans Marine has 4500 square metres of covered factory floor space on two different premises, one in Cape Town harbour and the other 3km from the harbour. The factory is able to accommodate vessels of up to 30 m in length.

In 2007 he was awarded the Disa South African Design Excellence Award and today Anton is one of South Africa’s premier yacht designers. Anton has over thirty years of practical sailing and racing experience in various locations around the world and has worked on and designed many very exciting designs and projects over the years. Anton is joined in the business by his wife, Charmaine, and a team of yacht designers.
Information HERE
Email HERE