52 Super Series. Pressure From the First Gun to the Last

It’s thanks to the Plattner family that local South African yachties will get to witness some of the most closely fought big boat yacht racing ever seen on our waters – and the excitement is palpable as all discussion with yachties is about this regatta, and the Rolex TP52 World Championships off Cape Town at the end of March.

Cape Town is the home port to the Plattner’s Team ‘Phoenix’. Both ‘Phoenix 11′ and ‘Phoenix 12′ fly the South African flag and will carry high hopes of a home victory.

The ‘Phoenix’ crews have given themselves every chance of returning their best ever results on home waters, having already put in 25 training days before Christmas, working extensively with drone footage overlaid with real-time data, which is fed between the two race boats and the coach boat.

“Peter Holmberg an America’s Cup winner, and ‘Phoenix’ tactician, has raced here a fair bit before while Andy Horton is very experienced in the fleet.” said Tony Norris who manages the ‘Phoenix’ boats. “We have been working on downwind sailing and starting as the key areas for our improvements.”

Interest among the local sailing fraternity has been building since the events were announced. With both their race boats in town, the ‘Phoenix’ programme have taken the chance to take young sailors from the Royal Cape Sailing Academy afloat during training sessions, giving them a first taste of the TP52 grand-prix racers. Eight to ten youngsters have been given initial training.

“There is so much enthusiasm here, and lots of talent. We are just trying to offer as much as we can in the way of opportunities,” Norris explains.

“We know that many people have booked time off work and made their plans to be on the water to watch the racing. This kind of racing has not been seen down here before, and everyone seems set to see as much as they can,” said Norris. 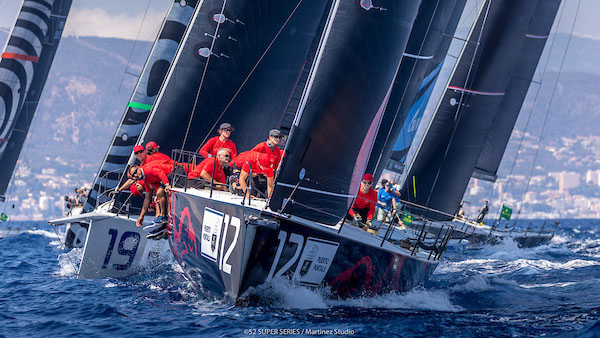 “Winning is the dream, but realistically if we could get a podium result here, it would be amazing,” smiled South African Tony Norris.

This event is not just about yacht racing, but also about rekindling friendships and reviving old memories of sailing in Cape waters.

Ross Halcrow, trimmer on ‘Platoon’ said “We are really looking forward to being back in Cape Town. JK (tactician, John Kostecki), Cheese (mainsail trimmer, Dirk de Ridder) and I have not been back together in Cape Town since we won the first leg of the Volvo Ocean Race on ‘Illbruck’.”

Just as ‘Illbruck’ laid the foundations of an overall victory in the 2001-2 Volvo Ocean Race with their leg win into Cape Town 18 years ago, Halcrow and the ‘Platoon’ team will be hoping regatta wins in Cape Town will be the foundation for finally topping the 52 SUPER SERIES season championship points table.

This Cape Town regatta is the ninth successive year of racing on the 52 SUPER SERIES, with owners and crew relishing a whole new set of challenges as two regattas on Cape Town’s Table Bay raise the curtain on what promises to be a most exciting and close-fought six-event season.

The first ever visit to Cape Town by the circuit, and indeed the class, which is celebrating its 20th anniversary this year, will test the ten different teams from eight nations that are set to compete on inshore racing waters relatively unknown to the majority of crews.

While there are high hopes that the Cape Doctor – the world famous strong, dry south easterly wind – will pay a prolonged visit to the Odzala Discovery Camps 52 SUPER SERIES V&A Waterfront – Cape Town regatta; and although most crews have optimised for middle to upper wind speeds, the truth is that anything could happen at this first regatta of the season.

Just as there are dozens of variables that need to be taken into account when predicting the possible podium finishers in Cape Town, so too there is no outstanding favourite for the 2020 season title.

One such predictive variable is the maintenance of a consistent crew line up from year to year.

In this respect, both Doug DeVos’s ‘Quantum Racing’ and the Roemmers family’s ‘Azzurra’ – the defending 2019 champions – have important line-up changes, whilst, for example, Harm Müller-Spreer’s world champions on ‘Platoon’ have the same after guard that guided them to finish second overall for the last two seasons. On balance, maybe the challenge to integrate new Italian tactician Michele Paoletti into the hot seat as tactician on ‘Azzurra’ will be slightly greater than that facing 2018 champions ‘Quantum Racing’ who see the return to their after guard of Michele Ivaldi. 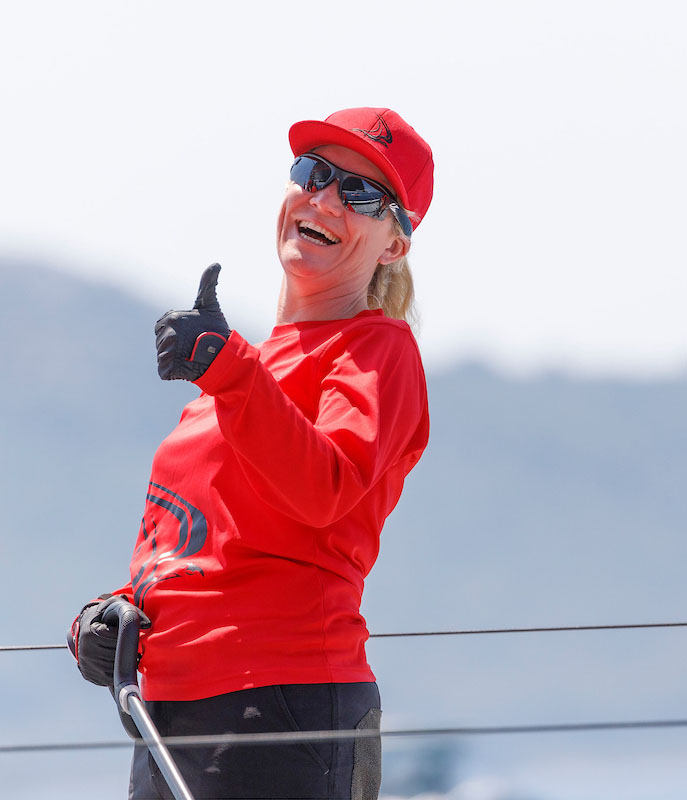 Italy’s 2000 Olympian Paoletti, 44, is well known to the ‘Azzurra’ crew, recently sailing on the Italian-flagged Maxi72, ‘Cannonball’, with many of the core ‘Azzurra’ crew. He has already integrated seamlessly into the tactician’s berth previously held by Santiago Lange, and for eight years before that by Vasco Vascotto, but the sailor who raced an America’s Cup challenge at Mascalzone Latino with Trieste contemporary, Vascotto, does not really have any recent experience in the 52 SUPER SERIES. That does not phase the laid back Paoletti: “It is a big challenge for me; a big honour to race in the colours of ‘Azzurra’, but I know the guys well, they have put their faith in me and I will do my best. They are friends, but also a super good team. The spirit of the boat really mixes the Argentinian and Italian outlooks and I think I fit in well and that is important. Other tacticians may be medalists and have won everything, but I know I have great support among one of the strongest teams on the circuit and it is now down to making good decisions. I don’t mind the pressure at all, and will just focus on racing as I know how,” says Paoletti who trained with the ‘Azzurra’ team for a week in Valencia before Christmas, prior to the build up period in South Africa.

In contrast, Michele Ivaldi has sailed and won with the ‘Quantum Racing’ team before. He is also one of the most experienced navigator-strategists in the fleet, stepping into the navigator’s role on ‘Quantum Racing’ vacated by Juan Vila. Ivaldi’s skill set as a strategist is seen as a strong asset as he returns to a team that features Cameron Appleton as tactician and Ed Baird as skipper-helm.

“It is an interesting dynamic we have, and when Doug steers then we will see Ed focussing more on working with him. One thing we for sure have tightened up on this season is the whole issue of risk management. Sometimes, if you are going to score well then, you have to take more risks. Other times it can be knowing when a top three or four result needs to be preserved and the low risk option prevails. The ‘I’m in third and I need to stay third’ view, for example. I think we are good on that now,” explained Ed Reynolds, ‘Quantum Racing’s’ project director.

He adds: “We have high expectations this season and with all our data analysis, we know how the boat can perform, we know we may not be the fastest boat in the fleet in all conditions, but the objective is always to be among the top three fastest across all the conditions and I think we are confident we are there.”

‘Quantum Racing’ will have Tom Burnham coaching all through the season.

Runners up ‘Platoon’ make only one significant change to their line-up, adding extra power in the grinding department as world indoor rowing champion 2m tall Phil Clapp joins the crew.

“We have done some more optimising work to get the weight aft and improve our speeds in the breeze where we think the Botin designs are still better suited. Otherwise we really just try to eliminate the mistakes that cost us last year. We need to get off the start line, sail fast and stay out of trouble. That means, literally, just focussing on each race as it comes, each day as it comes,” says Ross Halcrow, trimmer on ‘Platoon’.

Just as ‘Illbruck’ laid the foundations of an overall victory in the 2001-2 Volvo Ocean Race with their leg win into Cape Town 18 years ago, Halcrow and the ‘Platoon’ team will be hoping regatta wins in Cape Town will be the foundation for finally topping the 52 SUPER SERIES season championship points table.

Among those who, on the strength of their results early season 2019, might be considered podium contenders in Cape Town, ‘Provezza’ is the only team to have added a third pedestal winch, in line with ‘Platoon’, the other Vrolijk design in the fleet.

After losing their rig in Mallorca last year, which summarily halted their very real title challenge, ‘Provezza’ have upgraded their replacement spare mast and are hoping to be at full strength with their new mast by the second Cape Town event.

But the team that arguably arrives in Cape Town on the heels of a great run of winning form is Porto Cervo winners, ‘Sled’. At the last event of last season, they were on fire, winning six times to whitewash the fleet and score their first regatta win on the circuit.

“We had been working on trimming the boat differently and some new set ups, plus had some new sails,” observes Don Cowie of ‘Sled’.

Some in the fleet contend that ‘Sled’ were rather left to sail their own races in Sardinia as the title battles and other duels reached a head, so it will be fascinating to see if ‘Sled’ can immediately recapture that winning form.

‘Bronenosec’ have recruited US double Olympic medalist Jonathan McKee to work with Morgan Larson, while Andy Soriano’s ‘Alegre’ have changed their after guard to bring on past 470 world champion Nic Asher as strategist to complement Ado Stead’s work as after guard.

After missing the 2019 season Jean Luc Petithuegenin’s French team return with ‘Paprec’. Team manager Stephane Névé says: “We are delighted to be back in the 52 SUPER SERIES, and to be here in Cape Town. Cedric Pouligny will be our tactician for this event, he has done many Tours de France, raced on many different boats inshore and offshore, and was on ‘Fressa Rossa’ last season.”

The 2020 season spans six months and six events with, as ever, no discards. The 2019 season was the closest and most competitive yet, the destination of the title not being settled until the last days of the season. Looking at this year’s field and an itinerary that will test speeds and skills in the breezes of Cape Town, followed by four regattas in very well-known, fully-assimilated Mediterranean venues, it is almost certain that it will be the team that deals with the sustained pressure and makes the fewest mistakes that will lift the 2020 title.