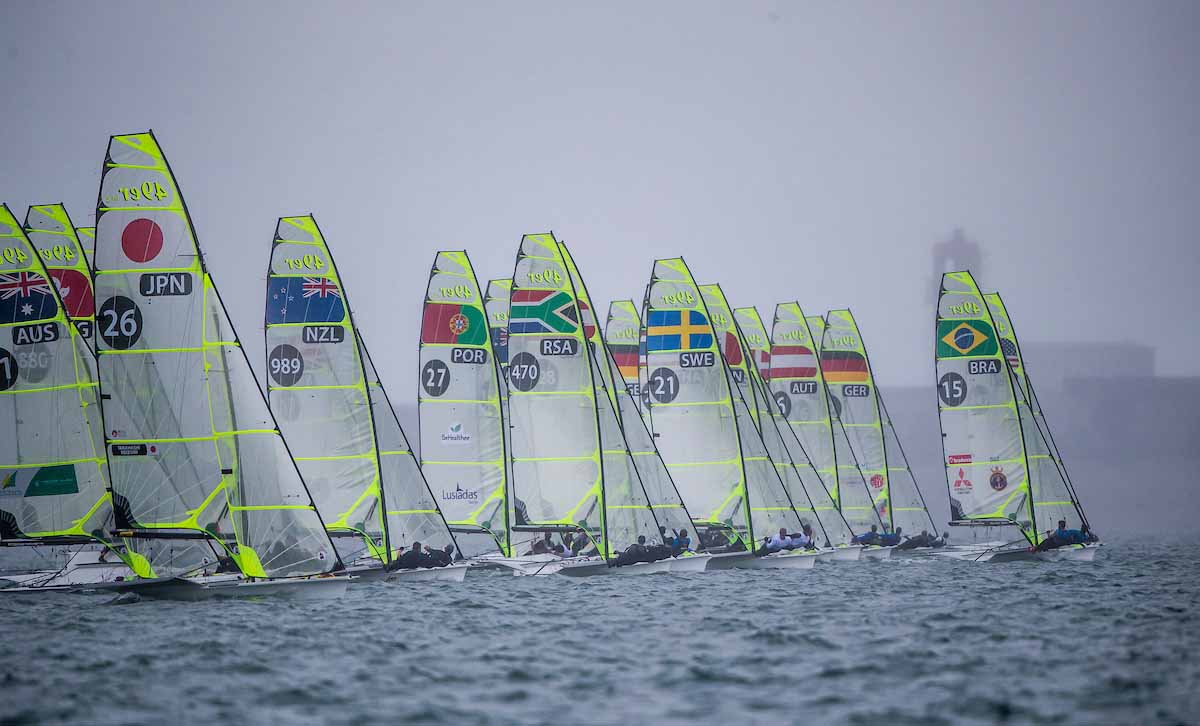 There are never any easy races in the Olympic Classes as the competition is so tough and so close that even the smallest of mistakes get punished severely. This is what Benji Daniel and Alex Burger learnt in abundance today – and sadly at a huge cost.

They were looking to realistically qualify for the Silver Fleet, and almost had it in the bag… .

Alex Letinhan, the RSA man-on-the-water in Geelong, reports as follows:

Yesterday (Tuesday) had very tricky conditions with breeze from 6 – 6 knots, big, very local shifts and a smattering of rain. The guys managed to find the right gear by the end of the first race, but it was only enough to catch up to 21st after rounding the first mark at the back of the fleet alongside the silver medalist from Auckland.

The trick was definitely trying to maximize smaller and more temporary gusts and shifts, rather than to invest in any bigger patterns. Alex and Benji got better throughout the day and were able to gain positions all the way around the course. Had they have won a few crucial “50/50s” in the last lap of the last race they could just as easily been in 9th as they finished in an extremely tight bunch.

It’s good to see them working hard and focussing on earning their spot in the competitive mid-fleet. This is just their third big regatta and they don’t have a lot of time to prove themselves, but they are showing a great trajectory.

After opening the day today (Wednesday) with a very respectable 11th the team was super pumped to secure their place in silver fleet with two more decent races.

Unfortunately in the second race they made a small tactical error up the first beat and fell out of what would be the top three boats. They just couldn’t penetrate through the very tight and competitive mid field, despite pressuring them all the way around the course and finishing 18th.

This was still an okay result and they only needed another 16th or 17th (other fleets dependent) to qualify for silver.

After their third strong start of the day, heading up the favoured side of the course and looking to have the result sealed, they misjudged a port cross, and had to do a penalty. They also had to avoid the boats around them during their penalty turns and this resulted in them being well out of the back of the fleet. By the end of the race they had fought back to 21st, but unfortunately this was 4 points away from the fleet split, and they had to accept the bronze fleet allocation.

A glum result especially after they had spent all day looking very competitive and quite comfortably achieving the hoped-for silver fleet qualification. But that seems to be how this 49er fleet works. The racing is brutally competitive and extremely tight; it appears that simply “not belonging” to the lower fleet does not earn you the merit to graduate to the next fleet.

The outlook is to really capitalise on being at the front of the fleet for the next few days and learn lessons that will hopefully pay dividends when they’re leading gold fleets and medal races in the future.