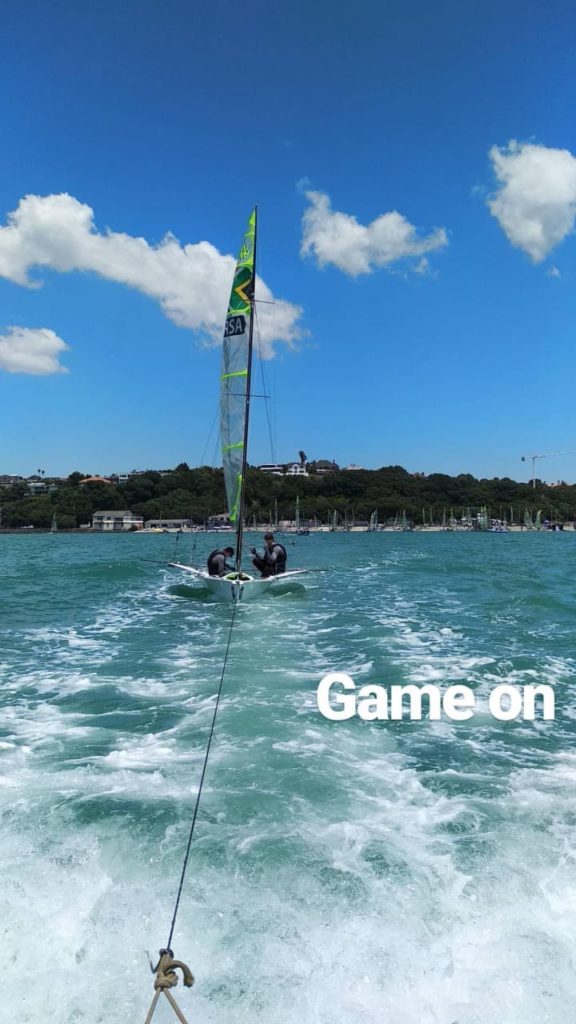 After a really tough day of sailing on day 1 in wild weather which lashed the race areas off Auckland, New Zealand where wind speeds up to 37 knots were recorded, and after a very long delay, enough to cause even the most seasoned veterans to assume they were having a day off, the 49er fleet were sent out for two rounds of qualifying races.

Our RSA guys, Benji Daniel and Alex Burger finished both races bruised and battered, but unscathed, and confident for the rest of the championship.

But today, instead of reeling off a few races and putting the myriad of hours training into practice in easier conditions, they were heartbreakingly let down by a broken spreader – which simply folded in half around the first mark when they were in a really good position. Unfortunately for them the course set was the furthest away from land, and by the time they were towed home and had replaced the spreader and re-rigged the boat, the last race was already getting under way. What is worse is that is the second spreader to do this on their boat in the last few days – and it’s a brand new boat too!

This is not an isolated incident as another team suffered a similar fate, and sustained injuries due to it!

One can only imagine how gutted they are, but these two young lads are strong, both mentally and physically, and they should be able to put this behind them and bounce back again. Let’s certainly hope so as missing 4 races in an event as important as this is devastating.

Their coach and on-water support boat driver, Alex Letinhan, summarised the situation well by saying “ the guys are 1 year into their campaign – everything affects them. As with all challenges there are opportunities to learn and bounce back. And they always happen to everyone. Today’s spreader break is not what is important, it’s what the guys do tomorrow, in the rest of the regatta and leading up to the 2020 world’s in Australia”. 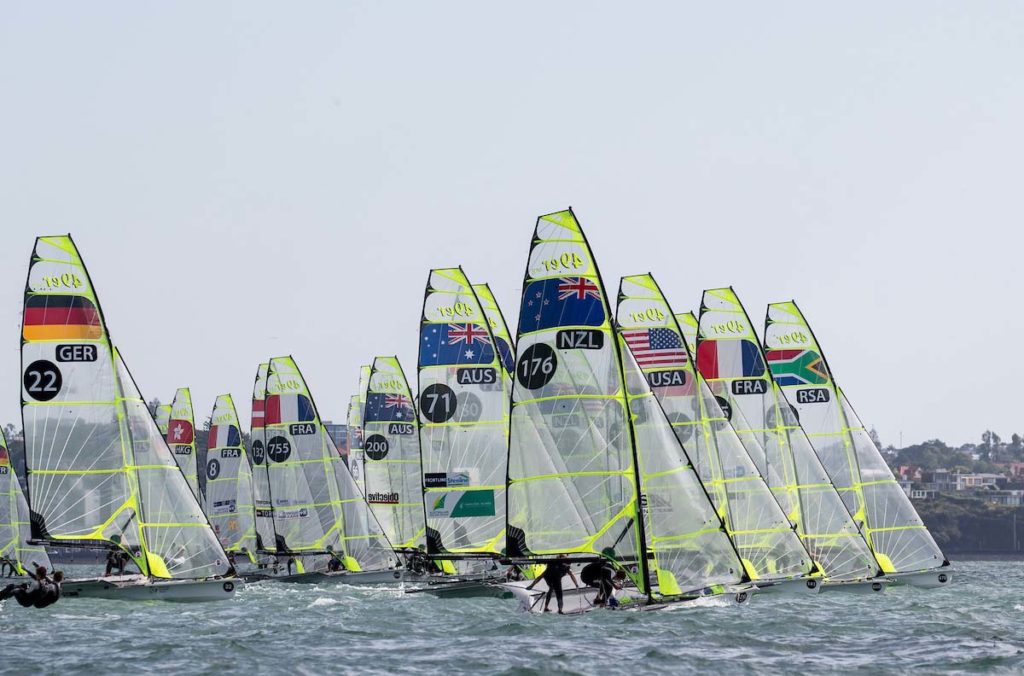 The RSA 49er of Benji Daniel & Alex Burger can be seen peeping out to windward of the fleet on day 1 of the World Champs in New Zealand.
Pic by Matias Capizzano

This is the report Alex Letinhan sent me after Day 2: “With the teams races scheduled for the afternoon there was enough time to recharge the batteries for an extra hour, pore over the myriad of weather forecasts again and have a proper breakfast.

“The skies were sunny and the weather was more or less where we expected it to be when we arrived at the club. We figured that the first race would be started in the strongest conditions of the day and would slowly die down while an upwind tide might cause the waves to grow. Challenging conditions, but just the type of challenge the team was looking forward to take on – they’d get to test their boatspeed against the best in the world in windspeeds they really enjoy.

“The race was set on the furthest away course which required a 45 minute tow at full taps.

“A tune up, a good start and a general recall down, and we were ready to race. The guys got a safe start out to the right and were hanging on to the top pack all the way to the top mark. I watched four green spinnakers go up in very competitive positions. And then watched one get dropped; and with it my heart sank. I couldn’t quite make out the flag, but none of the others quite looked like our rainbow coloured banner. But it was their distant and dejected posture that confirmed for me that we had a problem. I just happened to be the coach who had made it the furthest up the course and was able to help with a quick de-rig and hitched them onto what would be a pretty hairy tow back to the shore for a very hopeful rig repair and turn around.

“Despite everyone’s best efforts and nobody even missing a beat on the fight to get back on the water; one had to concede that the deafening sound of a spreader breaking was in fact the fat lady singing when the screens at the club are broadcasting the start of your final race some 50 minutes of towing away!

“The breakage was the top spreader folding in half with no significant event that could be pinged as to the cause. The bottom spreader did a similar imitation of a lawn chair in our practice sail on Sunday during a pretty undramatic capsize. Further, championship leaders from France had their top spreader snap clean in half today.

“Sometimes craftsman have a hard time not assigning blame to their tools”.

Disappointment and devastation aside, my hopes lie in seeing Benji and Alex bouncing back tomorrow, as from now on their racing is about good individual results, and not the overall result.